And in memory of Leah bas Rochel OBM

Any abrupt change of font size in a written work attracts attention. Surely so in the Torah, where every detail and nuance is of great importance.

In this week's Torah portion, which begins the third Book of the Torah, Vayikra (Leviticus - 1:1-5:26), there is a particular change of font. The letter Alef, as it is written in the Torah in the opening verse of this week’s portion “Vayikra el Moshe” ("And G-d called to Moses"), is tiny. Noticeably smaller than the usual sized Alef or the other letters in that passage, it excites comment and query from synagogue audiences every year.

Chasidic thought explains that this change is to give an indication of Moshe’s (Moses') unparalleled humility. Though he was unique amongst  men in his communicating directly with G-d, despite the fact that he was the leader who had defeated the Egyptians and freed the Jews and brought the Torah down to the world at Sinai, he nonetheless remained the most humble man ever to exist on this earth (Numbers 12:3).

Interestingly, the small Alef of our Parsha is contrasted by another font change elsewhere in the Bible. The name 'Adam', the first man and the personal handiwork of G-d, is written once with an oversized Alef, (Divrei Hayamim [Chronicles] 1:1)  to denote his grandeur and, by extension, the potential greatness of all humans--the ultimate purpose of creation,

To exist is to have a purpose. G-d created nothing without reason. One needs to constantly bear in mind one's responsibilities and to live up to the large Alef.

Recognition of one's worth, however, should never lead to hubris and conceit. Moses, the most accomplished person ever to live, was also the most humble. The small Alef reflected his awareness that his talent and ability were gifts from G-d. He constantly asked himself, "Have I truly utilized my full capabilities?"

Humility does not mean self-delusion, but rather an awareness of one's talents, tempered by the acknowledgement of where they come from. Moshe was aware of his qualities but he did not take any credit for it. In fact, he would say: "Were somebody else to be granted these qualities, they would surely do even better."

This dual perspective of the dueling Alefs -- an uplifting recognition of one's achievements tempered by the deflating sense of accomplishment -- invokes a humility, yet with a drive to accomplish in religion and life and thus justify one's very existence.

Cheder Chabad Dinner this Sunday - You can still reserve your seat!

Cheder Chabad of Monsey is having their annual dinner to help support the Cheder. This is your chance to be part of this amazing event, and continue to be an integral partner with the Cheder.

Here is everything you need to know about the Cheder Chabad Monsey dinner.

What else can I do for our children's Cheder?
Upgrade your RSVP to a full page ad to honor someone special

On behalf of your children, their teachers, and the entire Monsey Chabad Community, Thank you!

Have a wonderful week, 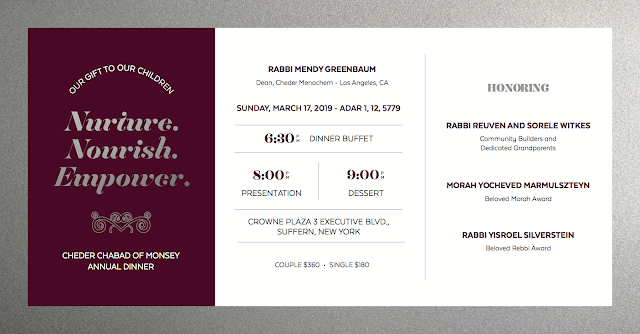