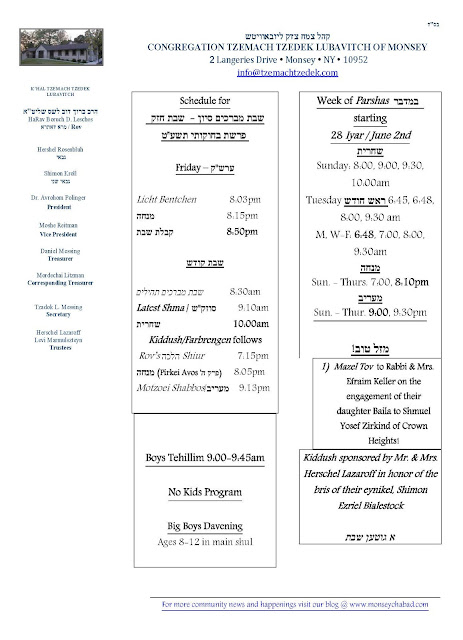 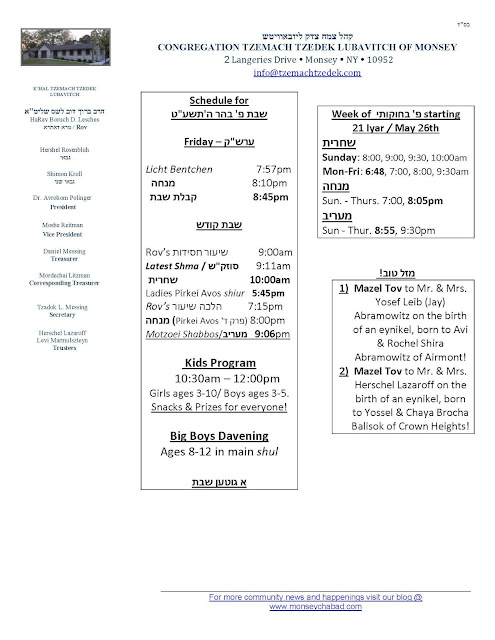 And in memory of Leah bas Rochel OBM

Why does the Torah refer to the newborn animals by their mature names instead of the usual calf, lamb and kid? The Torah wants to teach us that an animal is born with its entire potential already actualized. It cannot develop into something greater than it already is at this “age”.

Its qualities will never erode, but its inherent faults will always remain.

Not so for human beings. Man is always capable of more. Rabbi Akiva, for example, was forty years old before he learned to read Hebrew, yet he became one of the greatest Torah scholar in history. Every human being, background and affiliation notwithstanding, can transform him or herself and thus make great strides forward.

A calf is born and lives for one week. Having completed one full cycle of life, it reaches its greatest milestone: it is ready to be brought as an offering before G-d. There is no sense in waiting any longer for it won't develop into more than it already is. Mankind, on the other hand, lives for one week and only then begins the journey. Circumcision, performed on the eighth day, enables us to begin a process that only intensifies as we grow and mature.

(Though girls are not circumcised they don't miss out on this process. Jewish thought views women as endowed at birth with the inherent quality that men receive only at circumcision. In this sense women begin their process of spiritual growth one week earlier, from the time of birth.)

It is never too late to turn over a new leaf. Life is filled with milestones. Birth, circumcision, bar/bat mitzvah, graduation, marriage, parenting, grand parenting and so on. If physical maturity marches inexorably forward, it follows that spiritual maturity can, and should, at the very least, keep pace.

Men & Women! Please join us or this all-important course this Sunday! 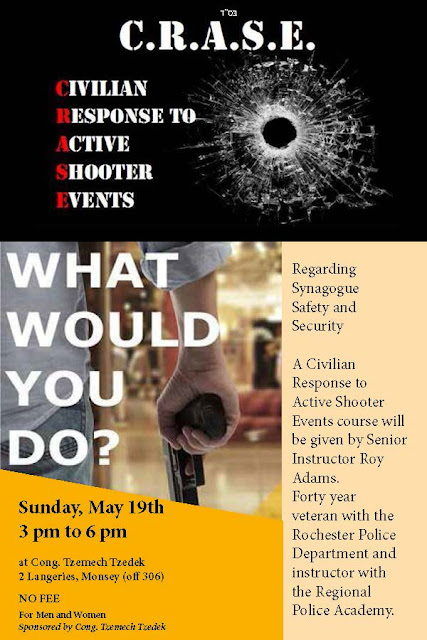 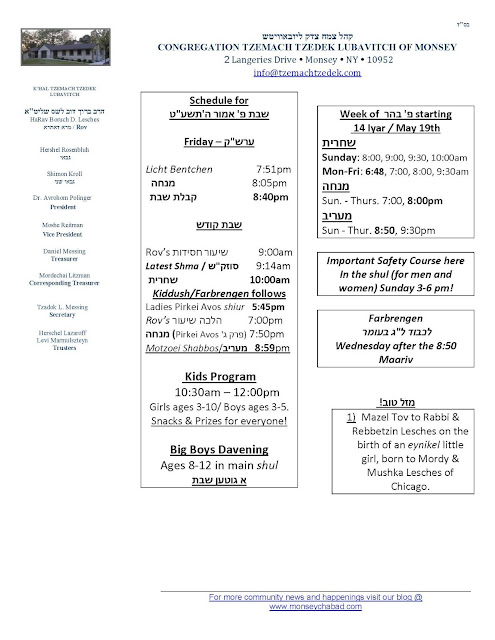 "A fantastic class! Don't miss it!" 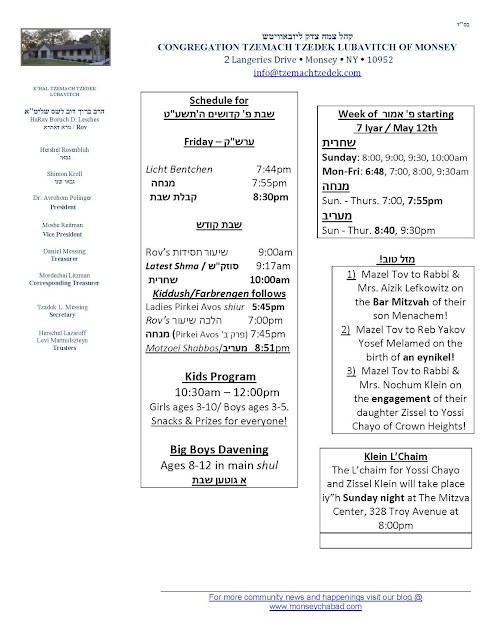 Have you ever felt like losing your temper but at the last moment you managed to restrain yourself? These types of inner battles often happen when encountered by a traffic officer or similar representatives of officialdom. But this conflict can happen just as well on the domestic front.....and the same restraint is needed!

The Parshah of Kedoshim (Vayikra (Leviticus) 19:1-20:27), begins with the concept that we should be holy. What exactly does this mean? The commenter Rashi explains that the term "holy" implies self-restraint. There are many temptations in life. To be holy means to have the ability to control one's immediate impulses.

Another commentator, Nachmanides, makes the point that this self-restraint may sometimes take a person to a point beyond the simple letter of the law. Jewish law permits a person to eat kosher food: but should one be an out-and-out glutton? According to this view, even if the food is as kosher as could be, restraint is power; it shows that one is truly free as an individual, rather than just being just a slave of one's appetite.

Do you remember the story of Jacob and Esau and the plate of lentils? One way of understanding that story is that Esau was ready to sell his birthright, the most precious thing in his life, for a plate of food. One response might be: "How pathetic!" Others might feel sympathy with someone who is sometimes a slave to his senses. They might say that after all, this is our human situation. Nonetheless, one  should expect a person to aspire to be master of his or her own being. A human being, yes. An animal -- no.

Much of the Parshah is devoted to giving guidelines about this kind of self-mastery, in a number of different areas of life. The keynote to all these is the famous teaching "Love your neighbor as yourself" (Leviticus 19:18). Rabbi Akiva taught that this is the great principle of the Torah and it relates to all other aspects of Jewish thought and all areas of personal relationships. This includes, as well, the instruction not to take revenge, nor even to bear a grudge. This certainly needs self-control: in our actions, our words and even our thoughts.
Imagine such a person! Does he or she actually exist?

We can imagine this behavior happening with a very simple, naive or even inspired kind of person, who never sees bad in anyone. Or we can imagine a person of power, who has acquired genuine inner self-mastery. But us, for ourselves as well? Can we exercise such self-restraint? But if the Torah instructs us to do so, then we have that ability!
What is power? Throughout history people thought that it means mastery over others. Now we realize, it is mastery over oneself.

Daily life presents us with many instances of personal battles and confrontations, as suggested and implied in our Parshah. This would include our relationships with our parents, in business dealings, dealing with giving charity, in the borders and involvements between men and women, and also regarding our behavior when we are genuinely in power over others, e.g. as judges - to be fair in all areas of judgment to both rich and poor.

This Torah portion poses the challenge for man to exercise the power of restraint, in order to build a world of goodness for the future. Man has that ability to restrain himself when and where needed, which will help bring about an entire world filled with holiness.

Schedule for Shabbos Acharei and Week of Kedoshim 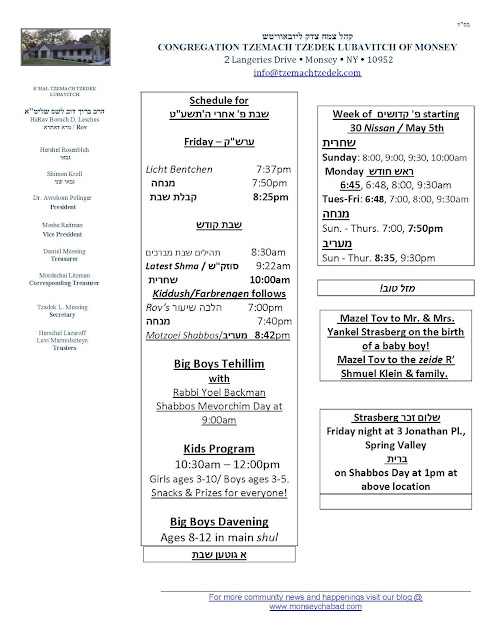 Mazel Tov to Yankel & Shaindel Strasberg on the birth of a baby boy on Shabbos, Achron Shel Pesach!

ברית
on Shabbos Day at 1pm at above location