Schedules for Shabbos משפטים and week of תרומה 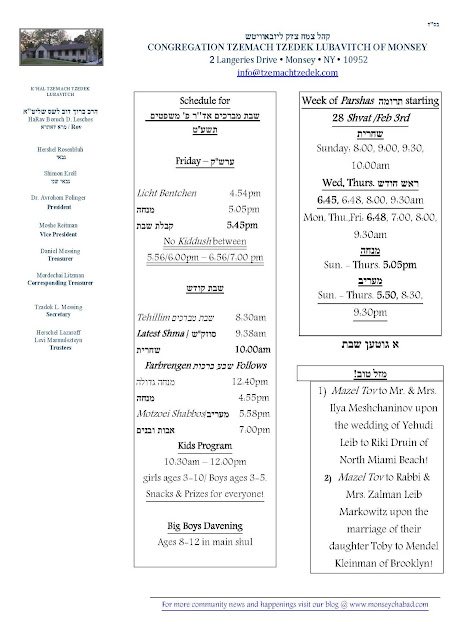 Dear friends,
we are feeling so blessed that Yehudi finally met his zivug, Riki ( Rivka Miriam) Druin of North Miami Beach, baruch Hashem and they were married in sunny Florida this past Sunday, בשעה טובהWe would be so honored if you could join us for a washing kiddush and Sheva Brachos  celebration, this Shabbos  Mevorchim Parshas Mishpatim, at the Tzemach Tzedek shul after daverning. Davening begins at 10:00am.Please RSVP directly to us  at brachame@gmail.com if you will be able to make it....We  so look forward to sharing our simcha with you!With blessings,Bracha and Ilya Meshchaninov.
1 comment: 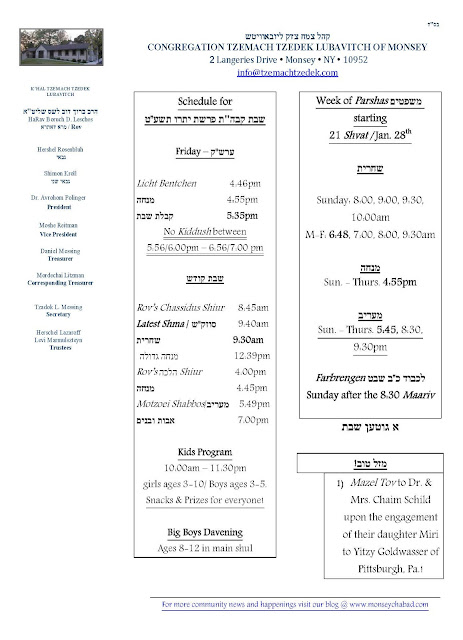 A Night of Opportunity

At the stroke of midnight, the plague of the firstborn struck Egypt. Pharaoh rushed into the night, frantically looking for Moses and Aaron. He pleaded with them to take their people and depart Egypt immediately.
But Moses refused to hurry. The people would need time to pack and prepare. They would need provisions for their journey. Perhaps the Egyptians would be so kind as to supply them with vessels and garments?
The Torah portion this week Beshalach (Shmos [Exodus] 13:17-17:16) tells of those final moments in Egypt and the departure of the Israelites.
The Egyptians opened their storehouses and bestowed all kinds of gifts upon their former slaves. Jews spent the night racing to and fro, amassing wealth. The poorest Jew was to leave Egypt with ninety donkeys loaded with gold and silver.
It was not only material wealth that the Jews were garnering. Embedded within the gold and silver of Egypt were the "sparks of holiness" that eagerly awaited redemption. These redeemed sparks would constitute the spiritual harvest of the Egyptian exile, in fulfillment of the divine promise to Abraham that his children of would depart Egypt with "great wealth."
One man, however, did not join the frenzy. Moses was looking for Joseph and his burial plot. .
One hundred and thirty-nine years earlier, Joseph had predicted the coming redemption. He had asked his people to swear that when the time came, they would gather his remains and carry them to the Land of Israel for burial.
The children of Israel, busy divesting Egypt of its treasure, all but forgot their sacred oath. Moses remembered and set out in search of Joseph's grave. He visited the venerable Serach, daughter of Asher, one of the few people alive who could remember Joseph's final hours.4
The senior “bobba” Serach informed Moses that Joseph had been placed in a metal casket, which had been dropped into the Nile. She led him to the Nile and pointed out the very spot. Moses threw a stone into the river at that spot and called out to Joseph:
"The time of which you prophesied has finally arrived. G-d has fulfilled his promise, and your children are now redeemed. We are all ready to leave. Please arise to the surface and we will commence our exodus."  Whereupon Joseph's coffin rose to the surface.
Commenting on this story, the Midrash declares that King Solomon spoke of Moses when he said, "The wise of heart shall choose the mitzvah."
The night was filled with opportunity. The righteous alongside the wicked, the wise alongside the foolish, and the leaders alongside the lay people -- all were running about collecting Egyptian valuables and the spiritual rewards they embodied. The only truly wise man was Moses. He forfeited the opportunity to amass physical and spiritual treasures, and went to fulfill a special, once-in-a-lifetime mitzvah.
The Midrash concludes: Jacob was honored that Joseph, the most powerful man in Egypt, personally took care of his funeral and burial. Joseph was rewarded in kind, when Moses, the greatest Jew in history, assumed the task of caring for Joseph's remains. And who buried Moses? G-d himself.
For all the wealth of earth and for all the rewards of heaven, there is nothing greater than a mitzvah to be observed.
(Excerpts from Chabad.org  - from Rabbi By Lazer Gurkow)

If you would like to dedicate the weekly Parsha Perspective in honor or memory of a person or occasion,

שבת פ' בשלח and the week of פ' יתרו 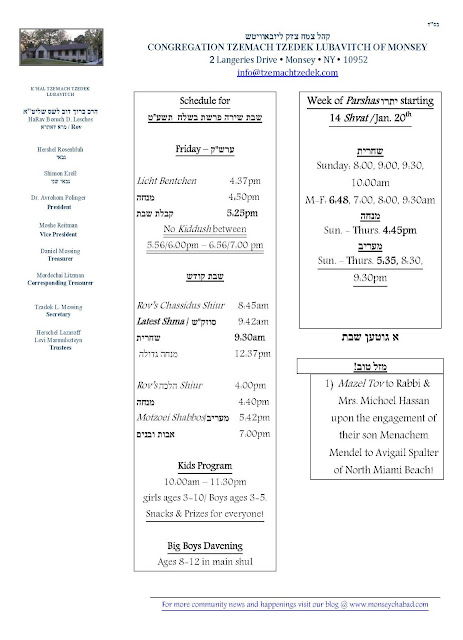 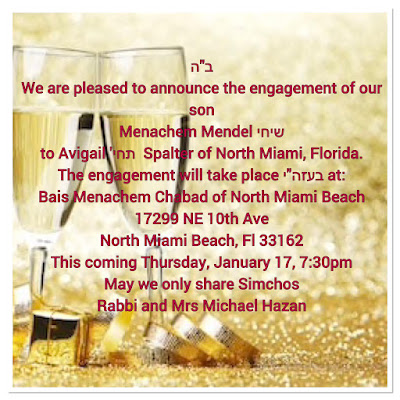 The Rebbe often  emphasized that the review of the weekly Parsha,  read  weekly by Jews the world over, is not only for the sake of reminding ourselves of our long history and what happened to our great grandparents in days long bygone.  Rather, the weekly Torah portion is for the sake of educating and instilling within us a more profound appreciation of our heritage and thereby enhancing our observance of Torah and Mitzvos today.
The ten plagues, discussed in these current Torah readings, which were inflicted upon the ancient Egyptians leading up to the Exodus from Egypt , have a message for us today. Let us take the Ninth plague, Darkness, which is in our current Torah reading this week.
The Torah tells us that there were three days of "thick darkness." According to the Midrash, the Egyptians could not see, nor even move. However, for the Jewish people it was different: they had light wherever they lived.
The Sages discuss this idea. Does it mean that the darkness did not affect the specific area where the Jewish people dwelt, the Land of Goshen? Or the other hand, does it mean, more mysteriously and mystically, that for a Jew, even in the Egyptian areas, there was light in during this period of darkness?
As explained by the Rebbe, these two opinions relate to our view of the world. One view is that there is a deep separation between the holy (the Jewish area) and the unholy (the idols of Egypt). In the holy realm, it was light; in the unholy realm, it was dark.
The second view is that the Jew in Egypt had the power to bring light to the realm of the unholy. Even in the Egyptian areas, where there was frighteningly thick darkness, the Jew could see.
This relates to our role in the world. The Jew enters a realm of spiritual darkness, yet he or she has the power to bring light even into that darkness, to illuminate the homes of the "Egyptians," of the apparently secular and materialistic world. This freedom is not just for ourselves. We have the power of light in the darkness of Egypt so that we can bring light to the whole world –the light of Redemption.
This forthcoming Wednesday (January 16, 2019) in the Jewish calendar is 10 Shvat, marking the 69th anniversary of the passing of the Rabbi Yosef Yitzchok Schneerson, the previous Lubavitcher Rebbe OBM (in 1950) and the ascent to leadership of Rabbi Menachem M Schneerson, OBM. Throughout the years of their leadership, particularly here in America, this was a key theme – to teach and inspire all Jews that true freedom must have with it a life of spiritual purpose dedicated to G‑d’s service, in order to realize our destiny, achieve our goal and indeed be a “light unto the nations”.
Excerpts from chabad.org   by  Dr. Tali Loewenthal
May you have a meaningful and uplifting Shabbos!
No comments:

Perception and Power
A basic ideal in contemporary thinking is not only the rights of the individual but also the power of the individual. If there is an issue which you really care about, then through the democratic process, the power of lobbying, getting the media involved to raise public interest and affect opinion -- you can actually do something about it. In some sense, each person can change the world.
In spiritual terms, this is an ancient Jewish idea. More than eight centuries ago Maimonides wrote that each person should consider themselves equally balanced between good and bad, and the world as a whole as equally balanced between good and bad. This means, says Maimonides, one's next step can change the balance for oneself and for the whole world. One good deed, or even, comments the Lubavitcher Rebbe, one good thought, can bring tip the balance of existence to the side of good, and bring healing to the world.
This means that each person is highly significant. His or her perception of life can be a crucial factor not only for their own wellbeing, but for the world as a whole.
Our perception of life is in fact a key theme in the Torah portion of this week of Va’aira (Shmos [Exodus] 6:2- 9:35), which tells of the plagues which G-d sent against the Egyptians.

What was the purpose of the plagues?

Well, one answer is, to force the Egyptians, particularly Pharaoh, to let the Jews go free. They can also be seen as a punishment for their cruelty towards their Jewish slaves. But, if we look carefully at the Torahtext, we see that this was not just a matter of a show force nor of causing pain. The goal was more subtle.

G-d explains that the purpose of the miracles in Egypt is so that "Egypt will know that I am G-d."

When Pharaoh first confronted Moses, who was asking that the Jews should be given their freedom, Pharaoh responded: "Who is G-d that I should listen to Him and let the Jews go free? I do not know G-d." This means that the purpose of the plagues was to make Pharaoh recognize G-d. Only then would he let the Jews leave Egypt.

In fact, however, this too is not the final goal of the plagues, G-d gives a further explanation to Moses. The plagues come so that the Jewish people will tell their children and grandchildren about what happened, and they "will know that I am G-d."

The purpose of the plagues was to change our perception of life, so that, through the generations, we recognize G-d and the significance of His teachings. For ancient Pharaoh, the plagues meant that he eventually obeyed G-d and let the Jewish people free. For us they mean that we recognize G-d's power in our lives, and therefore make the right step which will bring goodness and healing to the world.

(Excerpts from Chabad.org – by Rabbi Tali Loewenthal)
May you have a meaningful and uplifting Shabbos!

Shabbos וארא and Week of בא Schedules (click to enlarge) 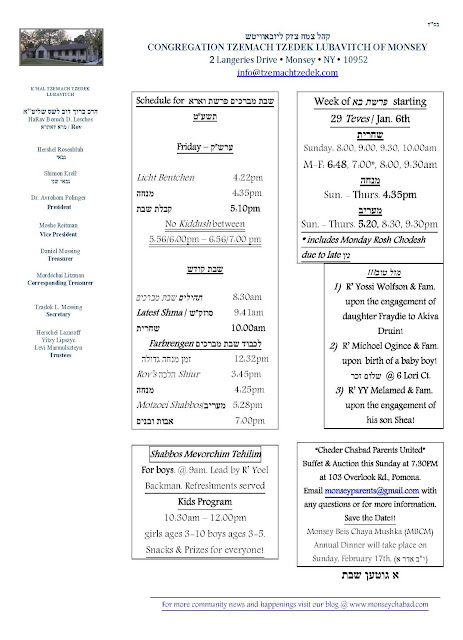