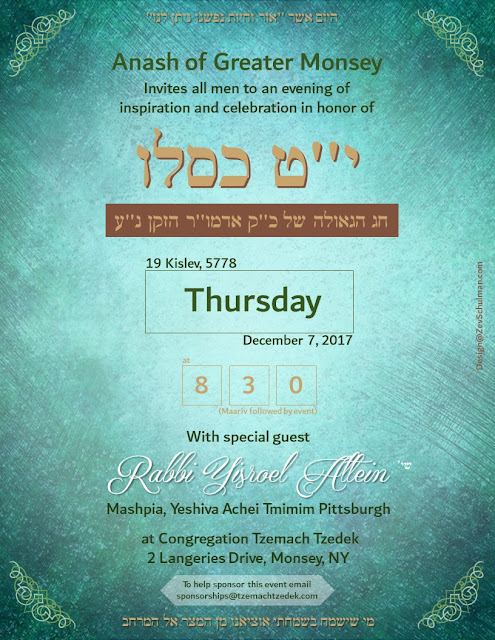 Email ThisBlogThis!Share to TwitterShare to FacebookShare to Pinterest
Labels: 19 Kislev

As Yud-Tes Kislev is coming up, this is a reminder to all to finish learning the Masechta that was chosen last year. If someone is not sure what Masechta he chose, he can send an email to rabbileschesoffice@gmail.com to clarify. 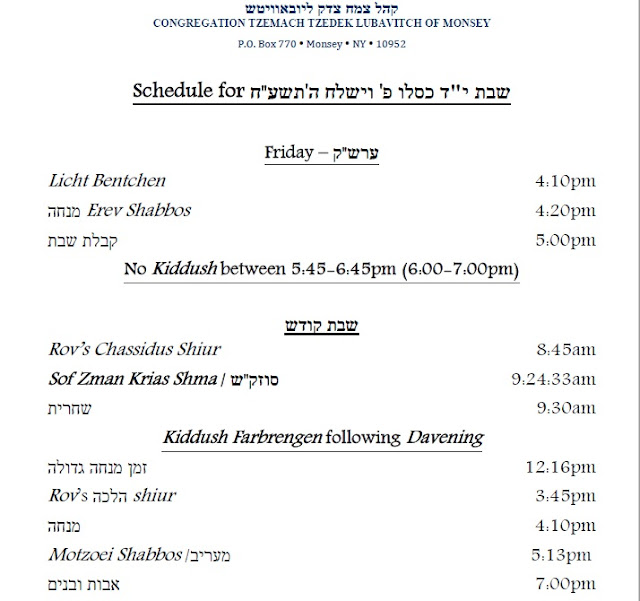 Which is the greater test of faith, affluence or poverty? Is it harder to be a good Jew when you're rich or when you're poor, when you're successful or when you're struggling? No doubt, we would all much rather accept upon ourselves the test of affluence, wouldn't we?
But let's not be subjective about it. Let us rather take an objective historical approach.

This forthcoming week, Thursday, is the 19th of Kislev (Dec 7), on the Jewish calendar. In 1798, on the 19th day of Kislev, Rabbi Schneur Zalman of Liadi, founder of Chabad Chassidism, was miraculously released from incarceration in S. Petersburg, on trumped up charges of anti-government activity.

There is a story about Rabbi Schneur Zalman, which happened immediately after this miraculous event. Back in the early 19th century, Napoleon was conquering Europe and promising liberty and equality for all. When he squared up against Russia, many Jewish leaders sided with him, hoping he would finally bring an end to Czarist persecution and enable Russian Jewry to enjoy full civil rights. Rabbi Schneur Zalman of Liadi, thought differently. He actively opposed Napoleon and even had his Chassidim assist in intelligence gathering for the Russian army.

When his colleagues challenged him and questioned his apparent lack of concern for the well-being of his own people, he argued that while Napoleon might be good for the Jews materially, his victory would result in spiritual disaster. History proved him correct. Without the Little Emperor, Russian Jews remained staunchly Jewish, while French Jewry virtually vanished. How many Jewish Rothschilds are left in the world? G‑d knows we could have used them. Most of French Jewry today hails from North Africa. The originals are few and far between.

There is a fascinating Midrashic interpretation in this week’s Torah portion Vayishlach (Bereishis [Genesis] 32:4-36:43), about the dramatic encounter between Jacob and Esau. The Torah says, "And Esau ran towards him (Jacob) and embraced him… and he kissed him." The Hebrew word for "and he kissed him" is vayishakayhu. In the Torah, this word is written with a line of dots above it. Says the Midrash Yalkut Shimoni: these dots are there to indicate that the word should be read it differently; not vayishakayhu, he kissed him, but rather vayishachayhu, he bit him!

How can we understand a Midrash which seems to change the entire meaning of the word? A kiss is an expression of love and a bite is the opposite! Says the Sfat Emet (Rabbi Yehudah Leib Alter, 1847-1905, the second Rebbe of the Chassidic dynasty of Ger), "When Esau kisses (materialism) , Jacob is bitten (spirituality)!"

The American experience confirms beyond a shadow of a doubt that freedom, democracy and equal rights, while a wonderful blessing for Jews for which we should be eternally grateful, also present a profound challenge to our Jewish identity and way of life. In the melting pot of the United States, Jews have integrated so successfully that they are virtually disappearing in certain areas! Success and affluence are wonderful gifts of opportunity, but we don't seem to be passing the test of faith with flying colors.

May we never again face the test of poverty or persecution. Please G‑d, we should be proud and knowledgeable Jews, successfully meeting the spiritual challenges of the good life.

May you have a meaningful and uplifting Shabbos!
If you would like to dedicate the weekly Parsha Perspective in honor or memory of a person or occasion, please contact Rabbi Shusterman at yshusterman@chedermonsey.org
No comments: 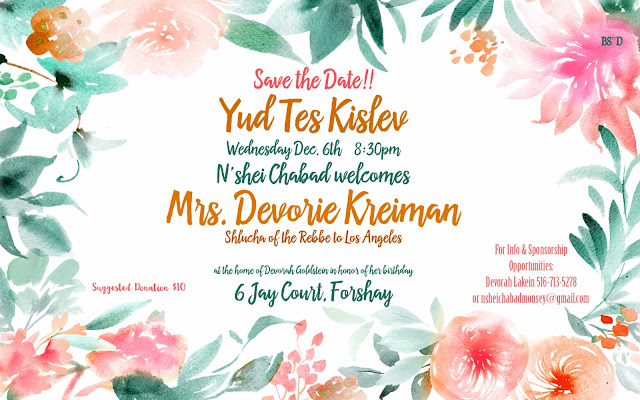