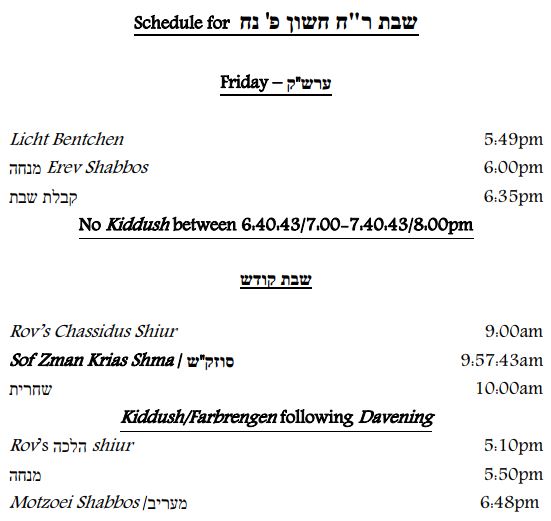 Our Torah portion this week Noach (Bereishis [Genesis] 6:9 -11:32) recounts the famous story of Noach and the flood.

Noach was saved from the deluge of destruction that engulfed his world and his greatest contribution is that he set out to rebuild that world. We don't read about him sitting down and crying or wringing his hands in despair, although I'm sure he had his moments. The critical thing the Torah records is that after Noach emerged from his floating bunker he began the task of rebuilding a shattered world from scratch. He got busy and picked up the pieces and, slowly but surely, society was regenerated.

Only one generation ago, a great flood swept over our world. The Nazi plan was for a Final Solution. Every Jew on earth was earmarked for destruction and the Nazis were already planning their Museum of the Extinct Jewish Race. Not one Jew was meant to survive. So even those of us born after the war are also survivors. Even a Jewish child born this morning is a survivor -- because according to Hitler's plan, which tragically nearly succeeded, he or she was not meant to live.

This means that each of us, like Noach, has a moral duty to rebuild the Jewish world
Our responsibility is to take up the burden of service, reach out to others and exert ourselves to the utmost in providing for their spiritual, emotional and financial needs. It may be difficult, we may well suffer personal damage in pursuit of our holy charge, but we dare not forsake our purpose.

The fifth Chabad-Lubavitch Rebbe, Rabbi Sholom Dov Ber, once attended a conference of rabbis which had been convened by the Russian government in their effort to ram through massive changes to the traditional Jewish educational system. At the risk of their lives and liberty, the rabbis worked passionately and collectively to protect our common heritage.
After the meetings broke up, Rav Chaim of Brisk came to say farewell to the Rebbe and discovered him sitting in his hotel room, overcome with tears.

“Lubavitcher Rebbe,” he exclaimed, “you needn’t weep. You did absolutely everything within your power!”

“Maybe so. But after all that, we did not succeed in foiling the plans of the Russian government!”

Thank G-d for His mercies that our world is, to a large degree, being rebuilt. Miraculously, the great centers of Jewish learning are flourishing today once more. But far too many of our brothers and sisters are still outside the circle. Right now there are hungry people to feed, naked people to clothe and ignorant people to educate.

Every one of us needs to participate. We are all Noachs. Let us rebuild our world.