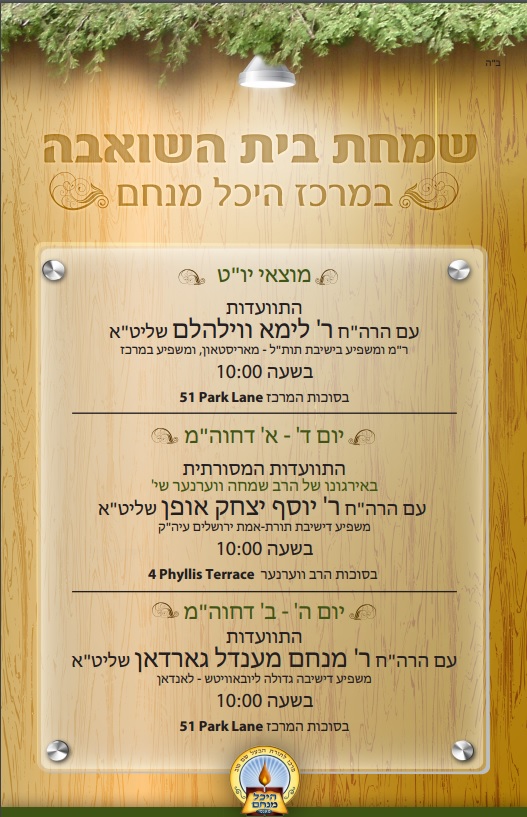 Some Important Halachah Points About Sukkos

Very Important
There are three Mitzvos of the Torah, Tefillin, Tzitzis and Sukkah which has a Torah obligation to have in mind the reason of the Mitzvah. One who doesn’t, even though he fulfils the Mitzvah, it is not being done properly. It's missing the effect that the Mitzvah has to have on him. “A person has to have in mind when he sits in the Sukkah, that he is sitting there in order to fulfil the Mitzvah of Hashem, that He commanded us to sit in a Sukkah, a remembrance that he took us out of Mitzrayim.” This is a free translation of the Alter Rebbe’s words. This Kavanah is a must. Before eating something in the Sukkah, especially the Challah on the first and second night, we should have in mind that Hashem commands us to make a Sukkah in order to remember the Clouds of Glory (Ananey Hakavod) that surrounded us when He took us out of Egypt so that we remember His wonders and awesome actions.

Children in The Sukkah
Boys who are not dependent on their mothers should eat in the Sukkah. This is usually from age six or if he is smart and mature, it could be even younger.

One Friday night a neighborhood experienced a blackout. As people made their way home from the synagogue, there was speculation on how much of the neighborhood was affected, when the lights would come back on and how best to serve undercooked, lukewarm cholent. One in the group commented on the serenity of the moment, and said with a wistful sigh: "This is how it used to be, just the soft moonlight." Which prompted a reply, "We didn't like it the way it used to be, that's why we invented lights!"

Judaism is forward thinking, eager to embrace innovation and fresh perspective. We are single minded in our focus to improve the world, shepherd it to its destination. We check the rear view mirror for guidance, but never dwell on "what used to be." Even our remembrances are designed to provide us with perspective on how to deal with the present and the future. So how does the concept of Sukkot - abandoning our homes and living in thatched huts, as we did 3,300 years ago, jive with this idea?

When the Torah commands us to live in sukkot (temporary huts) to commemorate our experience in the wilderness, it seems to suggest that we recreate that existence. Yet dwelling in those huts was not a destination, but merely a temporary situation, on our way to the Holy Land. So why reenact it?

But perhaps the holiday of Sukkot is not about returning to "simpler, more primitive times." Maybe Sukkot is in fact the ultimate progression, a leap forward to somewhere one otherwise would never have reached. When we stay right where we are, in the groove of a (healthy) routine, we face the danger of stagnation.

The Sukkah compels us to move on, to get off the hammock and onto the journey of making this world a more G‑dly place. Bereft of the security of our homes we are faced with our responsibility to accomplish more. The temporal sukkah reminds us of the temporal nature of material things. A sad lesson of hurricanes, wildfires and 9/11 is that castles made of stone vanish. The comfort our homes provide should never be confused with invincibility – and that is a good thing. For invincibility has a cousin named laziness, which spends his whole day thinking about what he won't be doing. The sukkah reminds us of our obligation to move on, to get out there and enrich the world around us.

Sitting in the vulnerability of the sukkah, we have the opportunity to experience the security only G‑d can offer, something that brick and mortar can't provide. This is progress, a leap we would never embark upon without compulsion--and could never attain without the message of thesukkah.

(Excerpts from Chabad.org – By Rabbi Baruch Epstein)
No comments: