The MBCM Production isTHIS SUNDAY AT 7:30 PM in Spring Valley High, 361 Route 59.
Take a break from Pesach cleaning to enjoy a stunning show by our talented high school girls. 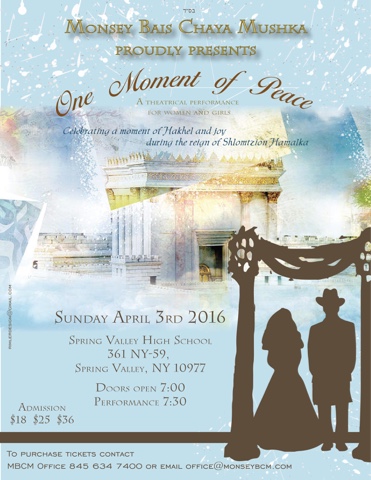 The following is the Tzemach Tzedek schedule for Shabbos Mevarchim Parshas Shemini -  Parah:

Kiddush not before 8:00pm

In Arlington, Virginia, the U.S. Department of Defense starts construction on its new headquarters, the Pentagon.

On the same day, a new immigrant to the U.S., Rabbi Menachem Mendel Schneerson, later known as the Lubavitcher Rebbe, writes in his private journal concerning two traits that make a moral and productive human being: “fins” and “scales.”

A few days later, the German army captures Kiev, capital of the Ukraine, and massacres 100,000 people in a ravine named Babi Yar.

The world is shocked when passenger airliners crash into the Pentagon and the World Trade Center, killing thousands.

Kabbalah teaches that the physical attributes of fish, and of all animals, reflect their psychological and spiritual qualities. Therefore, when one eats the flesh of a particular creature, the “personality” of that creature affects the person in some way.

On September 11, 1941, the Lubavitcher Rebbe wrote in his journal:

As the armor that protects the body of the fish, scales represent the quality of integrity, which protects us from the many pitfalls that life presents. A man of integrity will not deceive his customers, in spite of the financial profits involved. He will not lie to a friend, despite the short-term gain from doing so. He will not cheat on his wife, in the face of tremendous temptation. Integrity means that one has absolute standards of right and wrong and is committed to a morality that transcends one’s moods and desires.

Fins, the wing-like organs that propel fish forward, represent ambition. A healthy sense of ambition, knowing one’s strengths and wanting to utilize them in full, to maximize his or her G‑d-given potential. It propels us to fulfill our dreams and leave our unique imprint on the world.

Which of these two qualities is more important to cultivate in life—fins or scales? What ought to be the main function of education? Should we concentrate primarily on providing our children with the confidence and skills necessary for them to become accomplished human beings? Or ought we to focus more on raising children with principles, teaching them that it is more important to do right than it is to do well? Are the two equally significant?

The Talmud teaches that all fish that have scales also have fins, but that there are fish that have fins but no scales, and that such fish are not kosher. Symbolically, this means that a human being who possesses ambition but lacks integrity is “unkosher.” Such a person may be full of confidence, driven to make an impact on society. Yet educating ambitious and confident children does not guarantee their moral health.

On the other hand, the Talmud tells us that all fish with scales have fins. While integrity is fundamental, ambition is also important. By mentioning fins as one of the signs of a kosher fish, the Torah teaches us that it is not enough to maintain our own integrity; we must also have a positive effect on the world. The lesson of the Talmud is that if we teach our children to approach life with awe before truth, with an unyielding commitment to serve a transcendent, moral G‑d, they will certainly succeed and develop “fins” as well. Regardless of their other abilities, they will find the drive to improve themselves and to make the world a better place.

The events of September 2001, like those of September 1941, dramatically altered our view of the world. They demonstrated the destructiveness of people with fierce ambition and zeal whose morality is corrupt. In his diary entry of September 11, 1941, the Rebbe was emphasizing that if we don’t want evil to triumph, we must stand up with great determination against human fish who possess fins but lack scales.