Have you ever heard of Reb Mendel? He smuggled Jews out of the Soviet Union at the end of World War Two. The Communists gave him fifteen years in the Siberian gulags.

Ever heard of Mumeh Sorah? She did the same, but they never bothered sending her away. For decades her family never knew her yahrtzeit; they still don’t know where, if anywhere, the Communists buried her.

Heard of the mother who backed out of the driveway and pinned her toddler under the rear wheel?  She lifted the car by herself and saved her son.

When we ask heroes from where they had the strength to do incredible things, they give weak answers. Inevitably, their answer is “I had to do it,” or to put it differently, they couldn’t not do it. It’s not just modesty that makes them squirm when looking for answers; it is the almost-awkward simplicity. For, regardless of their level of articulation, they cannot come up with any good reason for why they did what they did.

Reasons are powerful motives for doing things. Logic is compelling. But logic is in the head, not the guts. So logic compels our minds to move. A mother’s love is not in the head; therefore all of her moves. Even parts of her she never knew she had move to free her baby from danger. She can’t put it into words, because there are no words in the gut. There is a place so profound that it cannot be made shallow with talk.

And there, right there where the deepest (no, you can’t really even subjugate them to the word) emotions reside, there the Jew has nothing but a visceral connection to G‑d. Not a staid, progressive, links-in-a-chain connection, but a reflexive, instinctive, metal-to-magnet connection. You can’t feel it, and you could live a life without ever knowing it was inside of you. Because like heroes, it doesn’t look to present itself. But if the moment calls for it, the response is automatic and Jewish. (Think of sworn atheists who. when it came down to it gave their lives rather than surrender their identity, or the Jew-in-name-only who, when things were counting on him, came through.) Why? I just couldn’t do anything else.

We have mitzvahs that we like. Family Seders with favorite recipes; Chanukah songs and latkes; Purim plays  and Sukkah parties. A melody that lifts you to your feet, a Talmudic insight that dazzles in its elegant simplicity, a Chassidic story that soothes with its empathy. They each relate to a different aspect of our personality and strengthen it Jewishly. But all these precious experiences, for all the growth they give us, do not touch our kishkes. Only the aspect of a Mitzvah which is beyond our intellectual grasp and not within our emotional embrace can resonate so deeply. These mitzvahs are called chukim, and it is with these mitzvahs that this week’s Torah portion begins, Chukas, (Bamidbor [Numbers] 19:1-22:1).

As the Camp Gan Yisroel New York staff arrived on the campgrounds in Parksville they participated in workshops on providing a physically and emotionally safe summer for their campers.

Rabbi Moshe Wiener, a melamed in Cheder Chabad of Monsey, gave an animated presentation on "Children's Behaviors - Where they come from and how to respond".

Over the few hours spent together, more then 50 counselors were able to learn from his many years of experience as both a melamed and camp director. They are looking forward to a meaningful and positive summer experience for all. 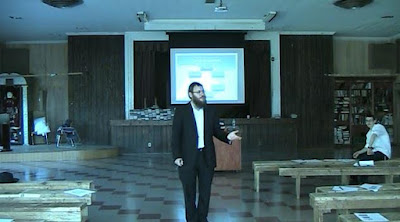 Mesibas Shabbos for girls will take place this Shabbos, Parshas Chukas, at the Litzman home. 8 Grosser Lane (shortcut opposite Ohr Sameach on  Route 306) from 5:00-6:00 PM.
Girls of all ages welcome. Bring your friends!
If any girls age 12+ would like to help out,  please call Rochel Litzman at 845-222-4824.
No comments:

This Sunday, June 28, (with a rain date of July 5) there will be a yard sale in front of the Wesley Hills Village Hall.

If you have an item to donate, we will split the proceeds with you. What an incredible way to help the Cheder and clean your home. It's a win win!