Rabbi Yosef Yitzchok and Esti Jacobson will be making a Shalom Zachor for their newborn son tonight at their home, 7 Fieldcrest Drive.

A list of wines for this year's Cheder Chabad pesach wine sale is being mailed this week and will be available at the Wine Tasting on March 22 at Tzemach Tzedek.

Please make all checks payable to "Cheder Chabad of Monsey".

Pick-up will be at The Grapevine Wines & Spirits 1.5 weeks before Pesach. 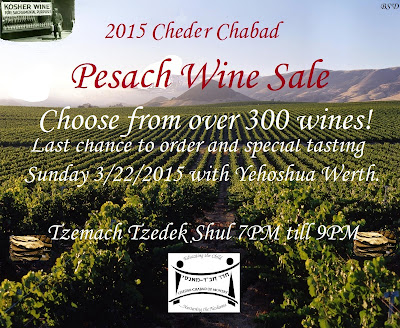 The 27th of the Hebrew month of Adar marks an unhappy anniversary (this year March 18, 2015). On this day in 1992, Rabbi Menachem Mendel Schneerson of Lubavitch,  “The Rebbe,” suffered a severe stroke, which robbed him of his power of speech and led to the illness from which he never recovered. This is the date when the voice which educated, inspired and encouraged millions of Jews and gentiles was stilled.

As the Rebbe always taught us, we look to the Torah portion of the week to gain insight and perspective. Incredibly, this week’s portion offers a resoundingly clear message regarding this anniversary, as well as Chabad’s seeming state of “leaderlessness.”

This week we have a compound Torah reading—the combined portions of Vayakhel and Pekudei (Shmos [Exodus] 35:1 - 40:38). The Rebbe pointed out on many occasions that these two names convey an important message.

Having said this, we proceed to Pekudei, “numbers”: the numbering and counting of each individual vessel in the Sanctuary. Yes, the total is greater than the sum of its parts, but Moses counts the individual vessels, because each individual component is independently significant. The same holds true with the Jewish nation: each Jew is endowed by the Creator with a uniquely precious personality, and is individually significant—not just as part of the total. Every Jew serves G‑d in a unique and inimitable fashion. Both vayakhel, the congregation, and pekudei, the individual, are absolutely essential components in the construction of a Tabernacle where G‑d’s presence will be manifest.

In 1950, the Rebbe was crowned as the seventh leader of the venerable Chabad-Lubavitch movement. At that point, Chabad possessed a prestigious history—but not much of a present, and it certainly did not seem to have a bright future. This glorious movement, which had once laid claim to hundreds of thousands of adherents throughout Eastern Europe, was almost completely decimated by the Nazi Gestapo and the Soviet KGB. The “grand” Lubavitch synagogue in Brooklyn, where the Rebbe presided, couldn’t comfortably fit more than 150 people!

Over the next decades, the Rebbe cultivated Chabad, building it into one of the largest Jewish movements of modern times. He did this through vayakhel—uniting all Jews; by talking to the collective Jewish soul. The Rebbe spoke the language of the soul, and souls the world over heard the call and flocked by the thousands to the doors of the Rebbe’s ever-expanding synagogue. The Rebbe then removed layers of tarnish and rust, revealing stunningly beautiful Jewish souls.

As beautiful and uplifting as all this was, in order for the divine presence to be revealed, we must now turn to pekudei mode. The next step for us is to take the Rebbe’s soulful message, and instead of using it to transcend our beings to become part of a collective whole, to allow this message to penetrate and transform our G‑d-given unique strengths and capabilities. The Rebbe’s passion and fire must now be the light which causes the millions of unique colors of our nation’s kaleidoscope to sparkle and dance.

Unbelievably, the Rebbe’s very last address was given on the Shabbat of Vayakhel. The next week, on the Shabbat of Pekudei, the Rebbe’s voice was silent. Perhaps it can be said that now he can be heard through the voices of each and every one of his countless followers and admirers who live his message, and anxiously await the moment when they will be reunited with him with the coming of Moshiach.

Our greater Monsey community has been blessed with the means to learn from and be inspired by the Rebbe, through watching videos on a regular basis both in our homes in our shuls and schools.

JEM, the organization producing these videos, is launching a 24-hour fundraising campaign this Monday, 25 Adar - March 16.

Each of us benefits so much from these videos, please help them take this leap! More info at JEMleap.com.