Rabbi Lesches has returned from his travels and all of his shiurim are back on schedule beginning with the Samach Vov shiur tonight (Wednesday).
No comments: 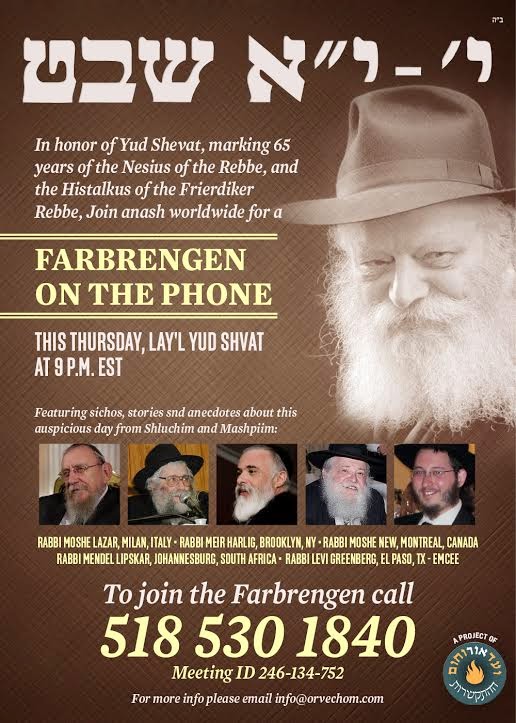 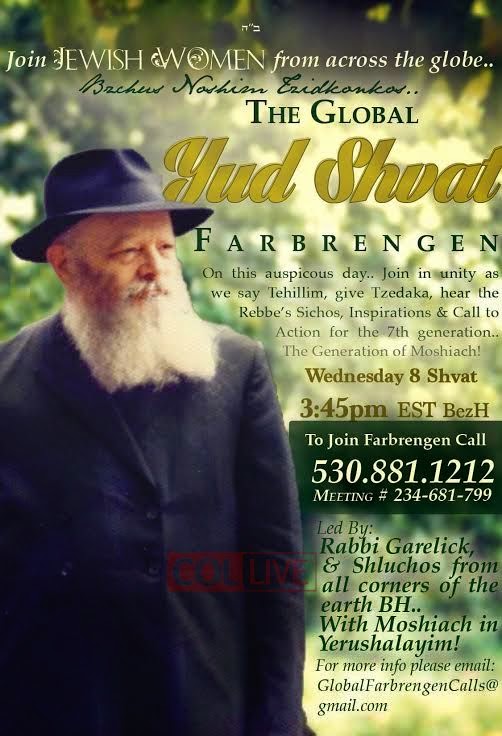 This Friday (Jan. 30) is the 10th day of the Hebrew month of Shevat (Yud Shvat in Hebrew) - a most significant date on the Chabad Chassidic calendar. It is the anniversary of the passing (Yahrzeit) of the sixth Lubavitcher Rebbe, Rabbi Yosef Yitzchak Schneersohn (1880–1950), of righteous memory. It is also the day when, in 1951, his son-in-law, the seventh Rebbe, Rabbi Menachem Mendel Schneerson (1902–1994), of righteous memory, formally accepted the leadership of Chabad. In honor of this, we present here a story, one of thousands, which reflects the Rebbe far-reaching involvement with Jews around  the  world, followed  by a thought on the weekly Parsha

“I first met the Rebbe during the lifetime of his father-in-law and predecessor, Rabbi Yosef Yitzchak of Lubavitch,” related Rabbi Avraham Mordechai Hershberg, the former chief rabbi of Mexico. “I asked the previous Rebbe about a rabbinic position I was offered in Chicago. He told me to consult his son-in-law.

“I spent nearly an entire night with the Rebbe. Our discussion covered tractate after tractate of the Talmud, and the scope of the Rebbe’s knowledge and his genius totally amazed me. From that night onward, I maintained a relationship with the Rebbe, and I consulted with him regarding numerous personal and public matters.”

In 1980, during the Iranian occupation of the American embassy there, Rabbi Hershberg was scheduled to travel to Iran for a public service project. Because of the tense atmosphere at the time, many tried to persuade him to postpone his trip. The Rebbe, by contrast, encouraged him. “Go with blessing,” he answered. “You are certain to light the Chanukah menorah in Iran.”

Rabbi Hershberg was puzzled by the Rebbe’s closing words. He was not necessarily planning to stay in Iran for Chanukah. But if he would, there was no question that he would light a menorah. He did not understand the Rebbe’s reference, nor the emphatic tone in his words.

Afterwards, it became clear. His mission in Iran took longer than expected, during which time he developed a relationship with some Iranian officials. He knew that there were six Jews among the hostages in the American embassy, and he asked permission to light the menorah with them. “Just as we have granted permission for a priest to meet with the Christian hostages on their holiday,” the Iranians replied, “we will allow you entry as well.”

And so it was. In the barricaded American embassy in Iran Rabbi Hershberg lit the Chanukah menorah that year, as the Rebbe had indeed advised him.
Two Loaves of Manna

Every Shabbat table boasts a goblet of wine and two loaves of the special Shabbos bread -- challah. Why do we have two loaves? The Torah portion this week Beshalach (Shmos [Exodus] 13:17-17:16) teaches that, in the desert, G-d gave our ancestors a daily portion of manna. On Friday, He gave them two portions, one for Friday and the other for Shabbat. We mark this miracle by placing two loaves of bread on our Shabbat table.

There were three unique qualities of the Manna:

Everyone came home with the standard measurement of Manna regardless of how much or little he gathered in the field.

All Manna that was left uneaten by sundown would spoil.

There was, however, one exception: the portion left over after sundown, on Friday. That remained fresh to be eaten on Shabbat.

Everything in Torah carries a moral lesson that is eternal. Eternal lessons are as relevant today as they were on the day that they were first taught. What is the relevant moral lesson to be derived from the Manna's three qualities?

Our lot is determined in heaven, and we all receive our share. Working overtime will not increase our allotment, and neither will working under-time decrease it either.

All money not utilized by the end of our lifetime -- our "sundown" -- will go to waste, because we cannot take it along.

There is, however, one exception: money that is saved for the Shabbat meal -- i.e. used for the purpose of a Mitzvah. That money, as any money used for a Mitzvah, will never go to waste, and will earn its owner eternal reward in the World to Come.