This Motzei Shabbos, Parshas Mikeitz, Shabbos Chanukah, Avos U'bonim will take place from 7:00 to 8:00 PM to allow for Hadlokas Ner Chanukah with the family.

Special Chanukah treats will be given out.

This week’s Torah portion of Miketz (Bereishis [Genesis] 41:1-44:17), recounts the dramatic episode of Joseph and his brothers. The young boy sold into slavery has since catapulted to prominence and is now viceroy of Egypt. The brothers come down from Canaan seeking sustenance during a famine. They encounter the viceroy face to face but do not realize that it is their own long lost brother.

"And Joseph recognized his brothers but they did not recognize him" (Genesis 42:8). Rashi explains that when they had last seen each other the brothers, being older, were mature and bearded while Joseph was still young and without a beard. Thus, it was easier for him to recognize them than vice versa.

Applying a more homiletic interpretation, the Lubavitcher Rebbe understands the brothers' lack of recognition not on the facial level but on the spiritual. The brothers were shepherds. It suited their spiritual lifestyle to be alone in the meadows, surrounded by nature and unchallenged by a society that might be hostile to their beliefs. The sheep they tended to didn't give them a hard time on religious issues. That Joseph could remain a devoted son of Jacob, faithful to his father's way of life while working in the hub of the mightiest superpower on earth was totally beyond their comprehension. They could not fathom or recognize such a thing.

All Jacob's sons were righteous men. But Joseph was the greatest. He is known as Yosef HaTzadik, Joseph the Righteous. Because it is one thing to be righteous in the fields and the forests. It is another to be righteous among men; especially men and women steeped in moral depravity, as were the Egyptians.

The viceroy of Egypt then would be roughly equivalent to the President of the United States, or at least the Secretary of State, today. Imagine that the person holding such high office is a committed, practicing Jew. He is successful in the fulfillment of his governmental duties, brings stature to the position, while at the very same time living the life of a devout Jew. Quite mind-boggling, but Joseph achieved it. And it was in this spirit that he raised his children, Ephraim and Menashe.

That's why Joseph is an important role model for our generation. Most of us find ourselves in a socially integrated society. We mix in many different circles. We live in a wall-less, even wireless community. Will we maintain our Jewishness with dignity and integrity despite the challenges thrust upon us by a wide open society? This is the question that Joseph answers. It may not be easy but it can be done. And not only to maintain our own proper level of morality and decency, but to inspire others by our example.

This links with the theme of Chanukah, which we are celebrating this week. The Talmud tells us that the Chanukah lights should be lit "at the entrance to one's house, on the outside." The Chanukah lights are intended to light up the darkness "outside." Inside, the home is holy. "Outside" suggests the opposite. In a spiritual way, the Chanukah lights transform the outside and illuminate it. We do this through their constant increase: one light the first night, two the second, and so on. This also expresses the power of the individual Jew to illuminate the world, through his or her own personal advance and example, step by step. Then, ultimately, the darkness itself will shine.

Mazel tov to Ronen and Ilanit Osinsky on the birth of a baby girl!

The Osinsky family is sponsoring a hot kiddush in honor of the baby along with a special Chanukah treat for the kids at  Anash of Airmont this Shabbos.

Shifra and Puah arranges meals for mothers of newborn children in our community. If you are able to cook a meal, please contact Karen Schild at 845-354-4898 or karenschild@yahoo.com.

Mazel tov to Shlomo and Sara Esther Bongart on the birth of a baby boy!

The Shalom Zachor will take place tonight at their home, 3 Regina Road in South Monsey.

Shifra and Puah arranges meals for mothers of newborn children in our community. If you are able to cook a meal, please contact Karen Schild at 845-354-4898 or karenschild@yahoo.com.

Rabbi Dov Oliver, director of the Center for Jewish Life / Hillel at RCC, receives an award from Town Supervisor Christopher St. Lawrence on behalf of the Town of Ramapo for his contributions to the Rockland Jewish community at its annual Jewish Heritage Night. 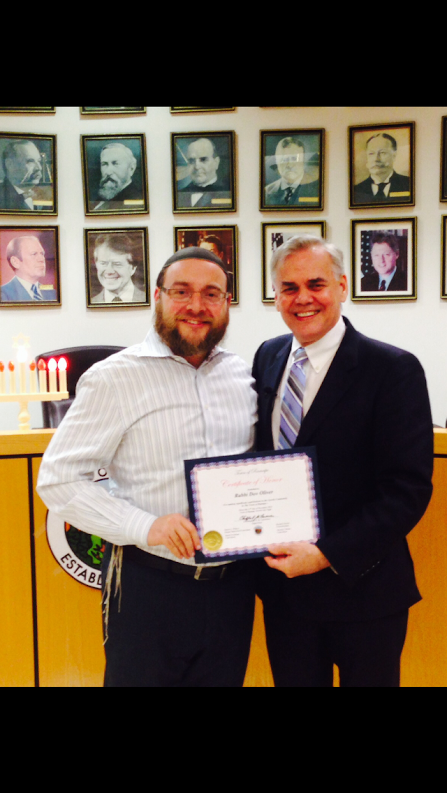