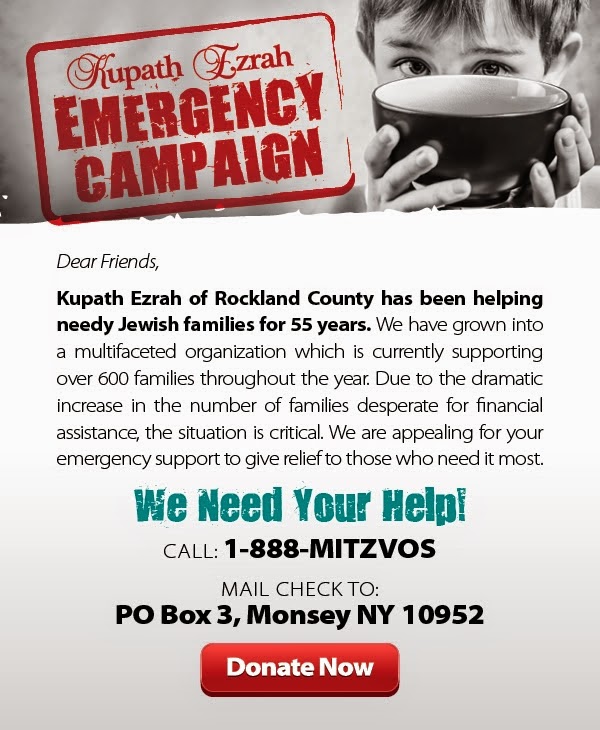 There is a pre-ticket sale for the Chanukah 8th Day concert at RCC until this Thursday night at which point tickets will go on sale to the general public.

There are not many $25 tickets so you may want to get yours before they sell out.

The seats will be given in the order they are bought. So for example those buying $36 tickets in the pre-sale will get the first row of that price category. 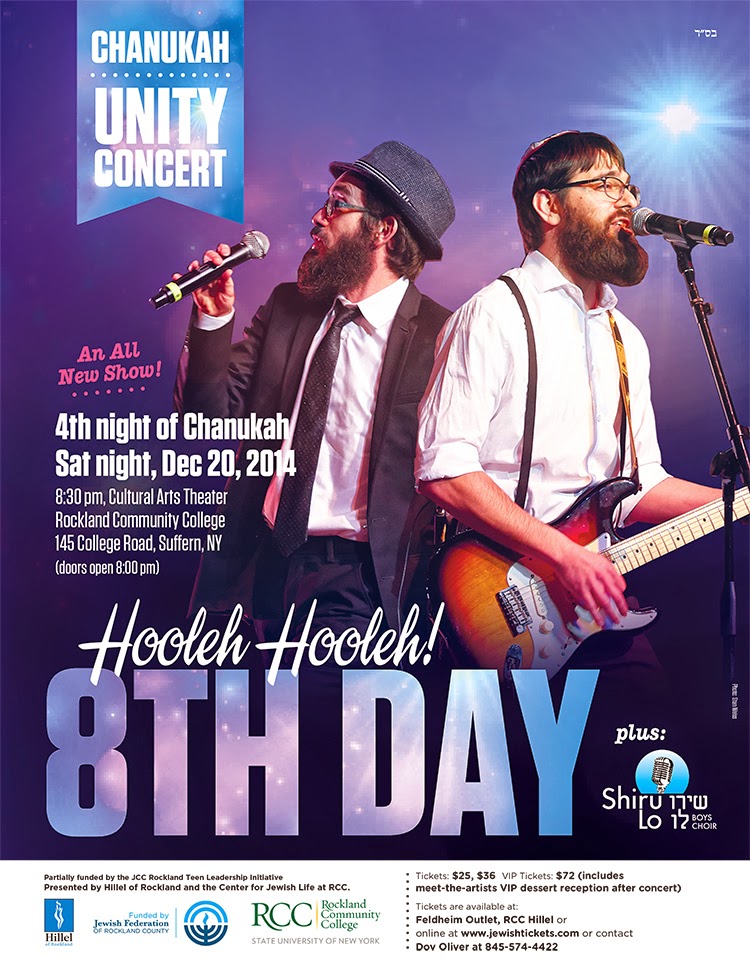 Shmuly and Michal Rimler will be making a Vach Nacht for their newborn son tonight, Wednesday, November 19, from  6:30 to 7:00 PM at their home, 1 Spring Rock Place.

The bris will IY"H take place on Thursday morning at 8:30 AM at the same location.

The Voice and the Hands

A response to the terror attack in Jerusalem.

Our Torah portion this week Toldot (Bereishis [Genesis] 25:19-28:9) recounts the birth of the twins Yaacov (Jacob) and Eisav (Esau). Growing up, the two boys developed their contrasting lifestyles - Jacob of piety and scholarship, as compared to  Esau, of violence and corruption. The choices they made affected four millennia of mankind.

This week we witnessed—yet again—this cosmic divergence. Evil terrorists slaughtered and butchered innocent Jews as they stood in prayer talking to their Creator. The contrast between the perpetrators and victims has never been more poignant.

One of the striking moments in this Torah portion is when Jacob, upon advice from his mother Rebecca, chooses to trick his blind father, Isaac.

Why does Jacob do such a thing? Because his father plans on giving awesome and historical blessings over to Esau. Rebecca, who knows what Esau is really up to, decides that she must do whatever it takes to reroute the blessings to Jacob.

How does he do it? He dresses up in Esau’s clothes, takes some delicious food prepared by his mother, and walks into his father’s chamber.

Jacob plays the part: “I am Esau your firstborn. I did what you told me [to get food for you]. Please come, sit and eat some of my hunting, so that your soul will bless me.”

But then he slips. When his father asks him, “How did you manage to get the food I asked you for so quickly?” he responds, “Because G‑d, your G‑d, helped me.”

Something doesn’t smell right anymore. Esau isn’t the kind of kid who mentions and thanks G‑d. Maybe . . . Hmmm . . . Isaac is getting suspicious.

“Come over here, son. I want to touch you and see if you are my son Esau or not.”

Without much of a choice, Jacob approaches his father. His father touches him, and says the immortal words: “The voice is the voice of Jacob, but the hands are the hands of Esau.”

(It ends well. He blesses Jacob with the most beautiful blessings. Later on, when the real Esau insists that his father bless him with something, his father tells him: “You will live by your sword.”)

The “voice” and the “hands.” Jacob took the sweet voice of prayer and study, while his twin grabbed the hands—and the knife.

The hands seem to have played the greater role in the history of humanity and its failings. Bloodshed, conquest, genocide, terrorisms, pogroms and all the synonyms of hatred. The hands seem more popular than the voice. Action films are more exciting than prayer services.

There will come a day, however, when G‑d will show us His version and interpretation of history, and we will then see a different graph, a surprising tale. We will watch how a Bubby with a book of Tehillim took down a dictator and saved a country. We will read of the voices of study and prayer that pierce through Iron Curtains and guns of steel. We will gasp at how an act of forgiveness between two feuding siblings brought the world one giant step closer to messianic utopia.

Regardless, we should use our voices now to say a prayer for those dedicated military and security Isreali forces who watch over our Holy Land with their hands of Jacob in Esau’s clothing. For we are truly proud of those righteous souls who, beneath the costume, are as pure and pious as their patriarch who lived so long ago in an ancient land called Israel.

Yes, there are times when we still need to use our hands. But our strength is our voice, the voice of Jacob. The voice of discussion, the voice of monotheism and study of Torah, the voice of parents singing lullabies of love to their children, the voice of silent strength. Because it makes all the difference.