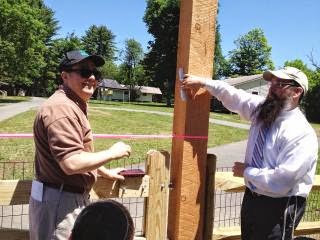 
Growing up, Gershon Sandler was not interested in attending Jewish overnight camps.

“I was very turned off by Judaism,” he said, recalling how he’d encountered people at his Conservative synagogue’s Hebrew school in northern New Jersey who preached about things they weren’t doing themselves.

Instead, he spent 14 summers as a camper and staff member at the secular, for-profit Indian Head Camp in Honesdale, Pa.

Sandler, 40, has since become observant and has experienced quite the range of Judaism through his experience working at summer camps: Camp Ramah in Wisconsin, which is affiliated with the Conservative movement; the modern Orthodox Camp Nesher at Lake Como, Pa.; and Camp Gan Israel, which is connected to Chabad, in the New York Catskill Mountains.

Now he’s starting his own Gan Israel overnight camp, aiming  to reach kids who might have some things in common with the younger Sandler. About 80 percent of the 60 expected campers at  the new Camp Gan Israel in the Poconos do not come from observant families and attend public school, said Sandler.

And rather than preaching to the campers, who range in age from second through ninth grade, he said, his approach is to “show them why you keep Shabbat, why you keep kosher, why you like to pray, and then they’re intrigued and want to learn more.”

Sandler said the largest contingent of campers will come from the Philadelphia area. Gan Israel also operates day camps around the country, including several local ones. The first summer will be girls only, though Sandler said he expects to start separate sessions for boys and girls next year.

The 83 acres that the Gan Israel organization purchased for the camp has been, like Sandler, converted from a private camp. The site of Camp Log-N-Twig became a religious nonprofit Camp Dina, an Orthodox girls camp affiliated with UJA-Federation of New York that moved to another site, before Gan Israel took over. The organization received support from the Foundation for Jewish Camp and the Avi Chai Foundation to purchase the $1 million property and invest an additional $500,000 in upgrades and renovations.

The new camp will absorb and build on a Camp Gan Israel Bat Mitzvah Experience pilot project that Sandler started two summers ago in Collegeville, intending to create a place where Judaism was the focus rather than “just the style, the flavor.”

He jokes about the increased emphasis in the Jewish community on creating speciality camps by saying, “We’re a Jewish speciality camp, specializing in making Judaism relevant.”

While the new Gan Israel camp has the usual fun activities — a climbing wall, a zip line and a newly renovated swimming pool — Sandler emphasized his goal of making sure they get the basics right.
“At some camps, food is a downer, a bummer because it’s hard to cook tasty food on a large scale,” he said. “But we have a caterer” that “makes absolutely amazing food, so for them to come to camp and eat totally kosher that tastes good, is really huge.”

Sandler said he first became more interested in becoming an observant Jew while in Israel on OTZMA, a post-college program. He and friends traveled for Shabbat from the kibbutz where they were working to Tzfat, where, he recalled, “for the first time in my life I experienced real simcha, real happiness.”

He went on to work at various Jewish camps and study at an Orthodox seminary, the Rabbinical College of America, though he did not pursue ordination. Now married and a father of four living in Monsey, N.Y., Sandler said his motivation is reaching people who “feel that Judaism is archaic, that it’s not relevant to them.”

Donna Segal is among those parents who send their children to public schools but were interested in the Chabad-affiliated camp. The Bucks County family — Segal is married with three children — eats only kosher food, but they don’t have a kosher kitchen; they celebrate Shabbat but also drive on the day of rest to attend services at the Chabad of Newtown.

“She became more aware of the roots of her ancestors and wanted to know more about Judaism after the experience that she had there,” said Segal, who immigrated here from Ukraine 25 years ago.

Since that first summer, Claire moved from a Richboro public school to Abrams Hebrew Academy, an Orthodox school in Yardley. The family is now deciding whether to send her to Kohelet Yeshiva High School or a public school for her freshman year. In the meantime, she’s heading back to camp and is bringing several friends from public school with her.

“It’s the attention” Sandler and his wife “provide to them,” Segal said.  “And how much they themselves connect to the kids.”