Camp Log-N-Twig was founded in 1953 by the Neulight and Tener families, catering to Jewish children from across the northeastern United States. Nestled on 83 acres of wooded hills and lake lands in the Pocono Mountains, the camp flourished for decades and was sold to the New York UJA (United Jewish Appeal) Federation in 1998.

For the next 12 years the campsite, which boasts no less than 32 wooden buildings, was home to Camp Dina, a UJA-affiliated girls’ camp.


Sixty years after it was settled, thanks to an innovative arrangement involving the UJA Federation, the Foundation for Jewish Camp, the AVI CHAI Foundation and Chabad-Lubavitch, the site will now become home to the newly renamed and expanded Camp Gan Israel in the Poconos, which grew out of Camp Gan Israel Bat-Mitzvah Experience.

“We began as a small camp just for preteen girls,” explains Gershon Sandler, who has been directing the camp since he founded it in 2012 with his wife, Devorah. “We had just four cabins on a rented property outside of Philadelphia, so we couldn’t take more than 50 girls. With our new grounds, we will have room for as many as 250 campers and are thrilled to be able to open up the camp to girls entering second through ninth grades.”

Claire Segal, from Bucks County, Pa., has been attending the Sandlers’ camp for the past two years and is excited about the changes. “The first year, I was a bit nervous because I didn’t know anyone, and there were girls from all over the world,” says Claire, now in eighth grade. “But everyone was so friendly that we all became very good friends very quickly. We still keep in touch with text messages and emails.”

The next year, Claire returned to camp with two school friends.

Some of her favorite memories, she says, include a trip to New York City; a day at Dorney Park, an amusement park in nearby Allentown, Pa.; and Shabbat celebrations that included old and new Jewish songs.


Claire’s mother, Donna, says it was an easy decision sending her daughter there. “My daughter came home from Hebrew school with a flier about the camp. I called our Chabad rebbetzin, and she highly recommended the Sandlers,” who had previously directed the Camp Gan Israel in Running Springs, Calif., says the mother of four, who immigrated to the United States from the Soviet Union in 1988. “I spoke to Rabbi Sandler over the phone, and he took the time to answer all my questions and explain his approach to Jewish camping, so I just knew it would be amazing.”

The Sandlers’ approach is based on Gershon’s diverse experience in both the private and not-for-profit Jewish camping sectors, where he has served in a variety of positions, including director of tours, sports specialist, group leader, survival specialist, and eventually, director.

“As a child, camp was the highlight of my year,” says Gershon, who grew up in what he describes as a nominally conservative Jewish household and attended public school. “It was the only time that I was surrounded primarily by Jewish children. Being part of the Jewish majority was an experience that brought me much comfort. Also, I am an experiential learner, so I just thrived in the overnight-camp setting.”
Donna Segal says that experiential learning is one of the aspects that attracted her to the camp. “The teachings are very targeted. There are literally girls there from all over the world, and the staff finds the time and creativity to reach out to every girl on her level, making sure that she is thriving, learning and having fun.”

The rabbi notes that the acquisition is a credit to the high-level cooperation of many Jewish organizations and leaders.


“When I first heard of this property, I consulted with Jeremy Fingerman, CEO of the Foundation for Jewish Camp,” he explains. “He helped me approach the UJA, who owned the campground, and introduce them to our camp and our unique vision.”

In the end, UJA Federation supported the effort, selling the property to them, thus keeping it in use as a Jewish camp. FJC also introduced the Sandlers to the AVI CHAI Foundation, which provided an interest-free loan that enabled Camp Gan Israel in the Poconos to make the down payment and to renovate the campgrounds.

“We admire Gershon Sandler’s tenacity and enthusiasm for providing more children with a positive, joyful Jewish experience,” says Jeremy J. Fingerman, CEO, Foundation for Jewish Camp. “We are excited to see Camp Gan Israel in the Poconos flourish in its new location and look forward its bright future.”

“This is an exciting opportunity for Jewish children,” says Rabbi Nissen Brenenson, director of education at the Jewish Children’s Museum in Brooklyn, N.Y., and a member of the camp’s board. “Overnight camp has the amazing ability to bring out the best of children, creating a powerful experience that can last a lifetime. And the Sandlers have proven that they’ve got what it takes to make that happen—time and time again.”
The newly acquired campgrounds are outfitted with 18 camper cabins, large dining and recreation halls, a swimming pool, sports courts and fields, a health center, climbing wall, zip line and more. They sit upon woodlands with two streams converging into a freshwater lake.

With the new site, Gershon says the possibilities are endless. “We are adding heat to the cabins, so we will be able to host Chabad House retreats from early spring to late fall,” he projects. “Also, we’re hoping to be able to open a boys’ division in August of 2015, to follow the girls’ session in July. And, of course, we are excited about being able to accept so many more girls into the program.”


Which is good, because Claire and her two friends have already recruited a fourth girl to join them, most likely with more to follow. 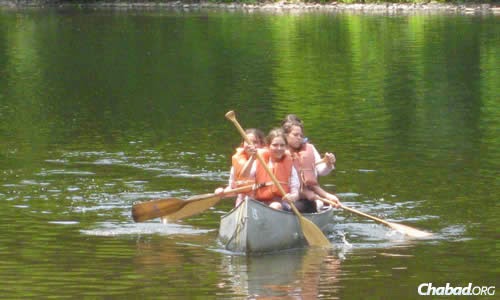 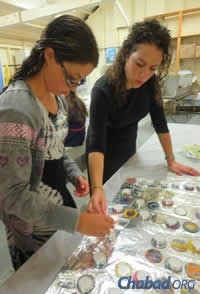 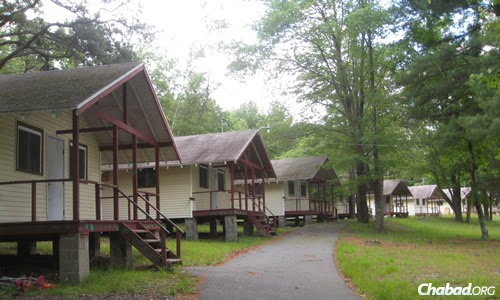