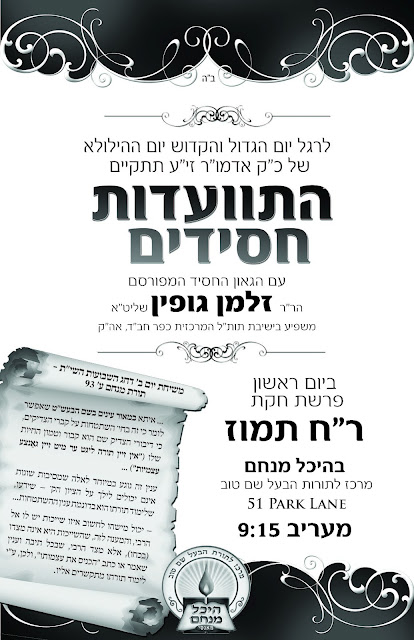 Chabad on Campus International is looking for 7 to 12th grade girls to work as childcare staff (watching 0-4 year olds) at our Campus Kinus on June 28 - July 1 in Parsippany, New Jersey.

For more information and to apply, visit www.chabad.edu/staff or contact staff@chabad.edu.

Boruch Dayan HaEmes - We are deeply saddened to inform you of the passing of the mother of Avrohom Siegel.
Avrohom is sitting shiva in Virginia until right before Shabbos when he will return to Monsey.

If you are able to cook a meal or dish for this Shabbos, please email beedove@gmail.com.

Only one day left to place an ad in the Chabad Jewish Enrichment Center Inaugural Gala Ad Journal. The deadline is tomorrow, Thursday, June 6, at 3:00 PM.

Reservations for the dinner, which is taking place this Monday night, June 10, at The View on the Hudson, can be made until Friday at 3:00 PM.

To place an ad in journal and/or reserve for the dinner, please visit www.chabadjec.org/gala or call 845-356-6686 for more information.

The following is the complete statement from Rabbi Boruch D. Lesches in response to recent media reports about him.

I would like to inform the public that statements I made in a private telephone conversation have been spliced and twisted to present opinions that are not my own and are offensive to members of the greater public.

I would like to make my position absolutely clear: Without any reservation, I endorse the rabbinical rulings encouraging victims of abuse to report to the police.

I was saddened to see an edited audio clip released by the Australian media regarding the personal phone conversation I had with an alleged victim of child abuse. I am troubled by the unprofessional conduct of the reporter who did not call me to verify the facts. Had he called me, I’m sure the information I would have provided would have produced a dramatically different article.

As I clearly told the caller in a subsequent phone conversation: I had no knowledge of the alleged assault claimed to have occurred some twenty-five years ago and discussed in the news report.

In the conversation, I was discussing a separate incident concerning inappropriate sexual conversations where I was under the impression that both alleged parties were similar in age, twenty-one years old.  I was never informed of any allegations involving minors prior to this call.

I am firmly committed to doing everything necessary to eradicate child abuse in all communities. If the caller had mentioned present abuse, I would have advised him to contact the proper legal authorities.

In my present community, where I am the Rabbi, there is no reticence to contact the police. We do not hide from or cover up criminal behavior. In our schools this is a known fact, and one of the reasons we, may G-d protect us, have to date not been afflicted with the evil disease of child sexual abuse.