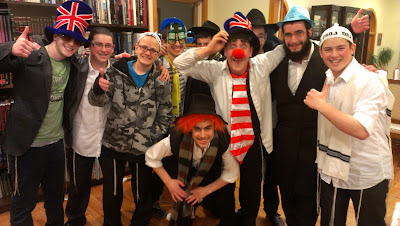 Rabbi Silverstein & His Friend on Purim

By Alex Taylor, The Journal News

SUFFERN — “One more turn! One more turn!” Rabbi Shmuel Gancz shouted as the festively dressed crowd clapped to klezmer music and cranked their noisemakers, known as groggers, in raucous response.

About 180 people gathered at the Chabad of Suffern on Sunday for the annual Purim festival to celebrate an ancient deliverance and modern day ties of family, friends and the Jewish faith.

The Jewish holiday, which started Saturday night and ended Sunday, celebrates the biblical story of Queen Esther saving the Jewish people from a plot to kill them by Haman, an adviser to the Persian king. Scholars date the story to around 2,500 years ago.

During the celebration, the Book of Esther, known as the Megillah, is read as participants drown out any mention of Haman’s name.

Because the events described in the Megillah deal with mistaken identity, it’s customary to observe the holiday with decorative costumes, copious amounts of food and drink, dancing and playful pranks.

Celebrants traditionally give monetary donations to the needy and send food to friends.

“It’s the happiest day of the year,” Gancz explained. “We celebrate it by twisting and spinning things around to bring laughter.”

The Purim festival has been held at the Chabad of Suffern for five years, organizers said. Past Purim festivals have been set in the Wild West and China; the theme this year was “Purim in Italy.”

Rabbi Gancz, for instance, was dressed as an Italian chef, complete with a chef’s white jacket and tall toque, while youngsters sampled pizza and Italian ices in addition to hamantaschen, traditional filled, triangular pastry.

“I like to celebrate every year,” she said. “It’s just fun.”

Kids weren’t the only ones having fun.

Some parents watched their children make masks and sit for a caricaturist, while others enjoyed a wine tasting.

“Purim is a victory,” said Melissa Myer, 46, a human resources manager who lives in Suffern.

Photos and video by Seth Harrison / The Journal News
No comments:

A black Utex down coat belonging to Zvi Webb was accidentally switched on Purim night at Tzemach Tzedek. A size 42 black Utex coat was left in its place.

This post will remain at the top of the page until after Purim. See below for new posts. 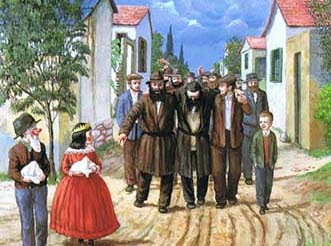 The following are links to the Taanis Esther and Purim 5773 schedules for the local Chabad shuls: