Save the Date - Hachnosas Sefer Torah 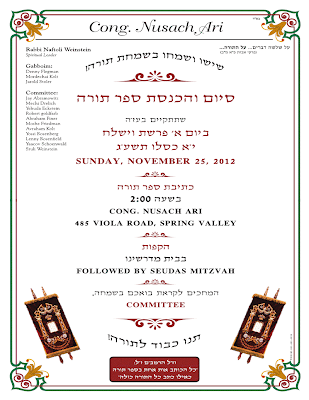 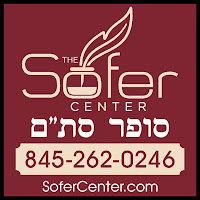 Rabbi Sholom Kass is a Sofer who has recently moved from Crown Heights to Monsey. His office is located at 25 Main Street (across from Rockland Kosher).

The office hours are: Monday - Thursday from 12pm until 7pm, and Sunday and Friday from 10am until 2pm. Walk-ins are welcome; there is no need to call prior to coming or to schedule an appointment.

Rabbi Kass is available to assist you with all your safrus needs; He both checks and sells Mezuzos, Teffilin, Megillos, and Sifrei Torah.

He also sells, Gartles, Chabad Wool Tzitzis with sizes ranging from 8-28, and Chabad Taleisim (in both the regular weave and the new Keter Chabad Light).

He offers quality products, stellar customer service, and prompt attention to your needs. To schedule a house call to have your Mezuzos checked, or for additional information, he can be reached at 845-262-0246. or visit  www.SoferCenter.com.
No comments:

Beginning this Motzai Shabbos, Avos U'Banim will take place from 6:45 to 7:45 PM.
No comments: 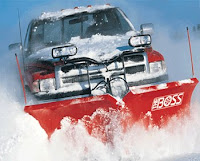 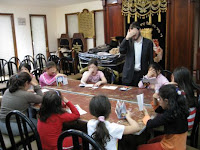 If you know any Jewish families whose children attend one of the local public schools, then Released Time may be a good idea for them.

Released time is a program that, under state and federal law, allows children in public schools to be released from regular classes one hour a week to attend religious classes.  Since 1941 thousands of children in the greater NYC area have benefited from classes where local shluchim and bochurim have provided exciting Jewish programming and enriched their Jewish identity.

A released time program is currently in the process of being formed in Rockland County.  If you know of any families with children in local public schools please mention this to them and please email Rabbi Gil Hami at rhami@monseychabad.com he can be in touch with them.

If you are interested in being involved either by teaching a weekly class or supporting financially, please contact Rabbi Hami, as well.

More information on Released Time can be found at www.jewishhour.org.
No comments:

I left a black Nautica coat in Tzemach Tzedek on Shabbos Parshas Vayeira and a Polo black sweater lying nearby. If found, please call 347-486-2628.
No comments:

"G-d helps those who help themselves"

Is this statement heresy? Does it deny the hand of G-d in our successes?

But indeed, "G-d helps those who help themselves" is a perfectly religious statement. What it means is absolutely consistent with traditional Jewish thinking. G-d does indeed help us to accomplish things, but He requires us to help ourselves first. If we just sit back and wait for miracles to happen, we may be disappointed.

"G-d will bless you in all that you do," (Deuteronomy 15, 18) makes it very clear. Our blessings come from G-d, but we must do. Of course, we believe in miracles--but we mustn't rely on them. The combination of our own hard work and efforts coupled with G-d's blessing is the ideal road to success. This is the meaning of the concept “Hishtadlut” – attempt and involvement.

The classic analogy is the farmer. He can plough and plant, sow and shvitz from today until tomorrow but if the rains don't come nothing will grow. Conversely, all the rains in the world will not cause anything to grow if the farmer hasn't planted first. After the farmer has done his work and the rains come from above, there will be a plentiful crop. And it's the same story whether we are farmers or shopkeepers, professionals or artisans, employers or employees.

This week's Parshah Chaye Sarah (Bereishis [Genesis] 23:1-25:18) tells of Isaac taking Rebecca as his wife. "And Isaac brought her to the tent of Sarah his mother." Rashi, quoting the Midrash, explains this to mean more than the obvious. When she entered the tent, it was as if she was Sarah, Isaac's mother. Because Sarah was of such saintly character, she was granted three special miracles. Her Shabbat candles burned the entire week, her dough was particularly blessed, and a heavenly cloud attached itself to her tent. When Sarah died, these blessings disappeared. When Rebecca arrived on the scene, they resumed immediately. In fact, this was a clear sign to Isaac that Rebecca was indeed his soul mate and that the shidduch was made in Heaven.

Each of those three miracles, however, required some form of human input first. A candle and fire had to be found, the dough had to be prepared and a tent had to be pitched before G-d would intervene and make those miracles happen. In other words, He does help us but we must help ourselves first.

Perhaps  like the fellow who would make a fervent prayer to G-d every week that he win the lottery, but no luck. In anguished disappointment, he vented his frustration with the Almighty. "Oh, G-d!  For months I've been praying to you. Why haven't you helped me win the lottery?" Whereupon a heavenly voice was heard saying, "Because you haven't bought a ticket, dummy!"

I wish it were that simple to win lotteries. But the fact is that it is the same in all our endeavors. G-d helps those who help themselves. May we all do our part.  Please G-d, He will do His.

By Randi Weiner, The Journal News

Little by little, the area’s schools are coming back to life from their “hurrication” — though in at least one city, an official has lost patience with the rate of progress.

Rye school board member Edward Fox complained Tuesday about what he called an “absurd” situation that has left Osborn School still dark. It is just one of a few schools in Westchester and Rockland that have yet to reopen.

Two utility poles in the Osborn School parking lot came down in the storm, taking wires with them. Consolidated Edison workers came to look over the situation Friday, put up cones, then asked the school Sunday to sign a work order to pay for the repairs since the poles are on school property. They promised the school would be back on line by Monday, Fox said.

Con Ed changed course Monday, saying the poles belonged to the school and the school would have to get a contractor to fix them, Fox said.

Fox said he’s spent hours on the phone with Con Ed staff, the governor’s office, the state Education Department, the Public Service Commission and anybody else he could think of to get the poles fixed and electricity back on so the 600 students could get back to class — to no avail.

Eventually, the school hired a contractor, got two poles from Con Ed and the work is progressing, with no guarantee the power would be back in time for school today, Fox said.

“We helped them with the poles ... and did the best that we could to assist them,” she said. The company decided not to do the work because the poles belonged to the school, not the utility company, she said. She said crews have been working to resolve the situation.

All Putnam schools opened Monday. Seven Rockland schools were still dark as of Tuesday: Chedar Chabad of Monsey in Airmont, East Ramapo’s Eldorado Elementary in Chestnut Ridge, Yeshiva Viznitz in Monsey, Prime Time for Kids in New City, St. Margaret’s School in Pearl River, Bais Midresh of Rockland in Spring Valley and Rockland Country Day in Congers were without power as of 3 p.m., with most of them scheduled to be back on line by 11 p.m. today except for Prime Time for Kids. Orange & Rockland Utilities has estimated the business will be back on line Saturday.

Only two schools remained dark in Westchester as of 6:30 p.m. Tuesday, and both were in Dobbs Ferry. Con Ed crews were waiting on word from the district that debris was cleared so they could finish the work, Banda said.

Though most schools were in session Tuesday, the first day back didn’t go as smoothly as hoped at Scarsdale Middle School. About 8:40 a.m., a ceiling pipe in a counselor’s office burst, setting off the fire alarm. The more than 1,000 students and staff evacuated the building, standing outside for about 20 minutes before the fire department gave the all-clear. The custodial staff was credited for quick and expert work in stemming the water, which damaged the rug, ceiling tiles, wallboard and papers on the desk. The school was not being used as a polling place.