Music and singing, good food and wine, some laughs and many heartfelt moments were shared by all in attendance this past Sunday night as Cheder Chabad of Monsey celebrated its thirteenth anniversary banquet at the Sheraton Crossroads Hotel in Mahwah, New Jersey.

The evening began with hors d’oeuvres and a wine tasting, with wines donated by Royal Wine Corp., in the glass atrium of the Sheraton as the waterfalls and the Chabad Centennial Symphony were heard in the background.

At registration, along with the night’s program and dinner journal, each couple received a complimentary CD of the symphony, donated by Zalman Goldsten of ChabadMusic.com.

The program began as the Master of Ceremonies, Rabbi Chaim Zvi Ehrenreich, introduced the Cheder Boy’s principal, Rabbi Avrohom Wolowik, who led the gathering with the Rebbe’s kapital.

The first speaker of the evening was Rabbi Boruch Lesches, the Rav of the greater Monsey Chabad community, who motivated the packed ballroom with his inspirational words. This was followed the talented Cheder Chabad Boys Choir, who have become an anticipated mainstay at Cheder dinners.  The choir, as usual, was orchestrated by Bentzi Ptalis and accompanied by Rabbi Zalman Goldstein on keyboards.

Next, Cheder Board Member, Yosef Levine, presented the Parent of the Year Honorees, Rabbi Eli and Chani Cohen, with an ornate glass challah tray.  Two of the Cohen’s sons, who were members of the choir, performed a touching duet for their parents and Rabbi Cohen gave his honest reflections on parenting to the attentive crowd.  A bouquet of flowers was presented to Mrs. Cohen and after Mr. Levine thanked the teachers and staff of the Cheder, another bouquet of flowers was given to Mrs. Simon, the Girls 3rd grade secular studies teacher, who is leaving the Cheder after this year to start a Chabad preschool in her community in Teaneck, New Jersey.

Immediately after, Chaim Bloch premiered a video he created that showcased the building and installation of the new Cheder Girls and Preschool building in South Monsey, which is expected to open this coming school year.

As the main course was served, a local Monsey favorite, the Pester Rebbe, got up on stage and entertained the crowd, leaving pretty much everyone in the room with a smile on their face.

As the night continued, the Cheder’s founding Menahel, Rabbi Yisroel Shusterman, continued the awards with a reminiscent recounting of the Cheder’s beginnings and the contributions of the Cheder’s major benefactors and honorees, Avraham and Devorah Hayman, who received the Amudei Hachesed Award and were presented with a framed lithograph of Michoel Muchnik’s “Abraham’s Tent” and a bouquet of flowers to Mrs. Hayman.  Mr. Hayman reflected on his own Jewish education and the influence of his late wife, Leah Miriam, and current wife, Devorah, on his own spiritual growth and the decision to provide the financial backing for the new Cheder building in Leah Miriam’s name.

Rabbi Shusterman and Mr. Hayman then made a surprise presentation of an exquisite silver bowl to Yisroel Schulman, Esq. the founding Chairman of the Board of the Cheder, who retired from his post last year and who was instrumental in the new building project.  Mrs. Rivka Schulman also received a beautiful bouquet of flowers.

As dessert was served, Rabbi Zalman Leib Markowitz shared with everyone his insights into the evening and with regard to the growth of the community and the Cheder.   The evening was topped off with benching and Sheva Brachos for the Shusterman family followed by Ma’ariv.

As the attendees strolled through the Sheraton lobby and outside into the night, they carried with them the memories of a beautiful evening commemorating the incredible growth of the Lubavitch community in Monsey and its Cheder.

Thanks to Nechemiah Kaplan for the photos.

Faigie and Elchanan Tenembaum and Moshe and Yehudis Chana Meshchaninov will be making a Bris for their son and grandson this Friday, 25 Sivan, June 15, at Tzemach Tzedek.

Day camp just 30 minutes from Monsey is looking for girls to be staff members. 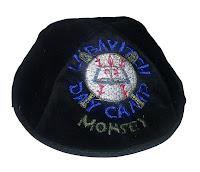 Lubavitch Day camp is happy to announce the opening of its pioneer division called the “LDC Lampchernicks – Lamplighters”.

Campers entering 7th grade will enjoy an exciting program designed to maximize their day camp experience. Enhanced learning program, extra late nights and a unique opportunity to volunteer their talents are some of the additional plans for this special division of camp.

Please complete your registration packets ASAP as bunks are filling up!

With camp around the corner some bunks have reached maximum capacity and others have a few spots left.

To secure a spot please complete registration by this Friday, June 15th, and receive your complimentary LDC yarmulkah!