Mazel tov to Rabbi Yossi and Sara Gita Soble on the birth of a baby boy!

Shifra and Puah arranges homemade meals from people in the community for mothers of newborn children from our community. If you are able to cook a meal, please contact Karen Schild at 845-354-4898 or karenschild@yahoo.com. 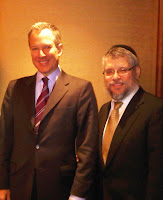 In a bold move the New York State Attorney General’s office has sued to close two large non-profits alleged to be involved in fraudulent activities.

Pending the outcome of the case in New York State Supreme Court, the Court, upon the recommendation of the Attorney General appointed attorney Yisroel Schulman as the Receiver of the non-profits.

In that capacity, Mr. Schulman has responsibility to oversee all activities of the non-profits and to investigate financial and other alleged wrongdoings.

The Shiur is given by Rabbi Lesches and takes place every Shabbos afternoon until Rosh Hashana at 5:45 PM at the home of Mrs. Yehudis Abramowitz, 6 Zabriskie Terrace.

All women and older girls are invited and encouraged to participate!