This week’s Torah portion teaches  "If you see your enemy's donkey lying under its load, you might want to refrain from helping him; [however], you must surely help with him." (Shmos (Exodus) 23:5)

Before Rabbi Shneur Zalman of Liadi, known as the Alter Rebbe, became the first leader of Chabad, he once traveled to raise money for an important charity. Coming to the home of a wealthy man, he was offered to stay and teach his children in return for the entire sum he hoped to raise.

After a short stay, he informed his host that he was leaving because he could not tolerate the conduct of the people of the city. His host asked him why and Rabbi Shneur Zalman replied, "You torture the poor." The host thought that he was referring to a recent meeting discussing  how to raise the money for a government tax. It was decided that first the poor should give as much as possible, and the rich would make up the difference. He realized that Rabbi Shneur Zalman was right: the poor should not be bothered at all. The rich should give as much as they can, and the poor shouldn't give anything. Immediately he arranged a second meeting, and it was decided that the rich should give first what they could afford.

In the human body there are "rich" organs and "poor" organs. The "rich" organs are the mind and the heart, and a "poor" organ is the stomach. "In this city," he explained, "instead of putting emphasis on the rich organs and engaging them in the study of Torah and concentrating on prayer, the approach is to constantly abstain from food and fast. Thus, the 'poor' organ, the stomach, is deprived and made to suffer for the person's iniquities. I cannot tolerate this approach!"

This new philosophy was very intriguing to the host, and he asked Rabbi Shneur Zalman its source. He told him of the Baal Shem Tov and his teachings, which accentuate working with the mind and heart and not punishing the body.

"The Baal Shem Tov," he continued, "bases his approach on a verse in the Torah portion of Mishpatim and interprets the phrases as follows: 'If you see' -- when you will realize that -- 'chamor' – (usually translated “donkey” but can refer also to the physical matter of the body – as the Hebrew word chomer- “physical substance”), is 'your enemy' -- because he is engaged in material pleasures, and thus hates the soul which is striving for G-dliness and a higher spiritual level -- and the body is -- 'lying under his burden' not wanting to serve G-d -- 'you might want to refrain from helping him' – i.e. you may think that you will deny him the food and sustenance it needs. Be advised that this is a wrong approach. Instead, 'you must surely help with him' -- give him his bodily needs and attune your mind and soul to worship G-d. Eventually, your body will become purified and cooperate in your Divine service."

Rabbi Groner to be Guest Speaker at YMMLM Dinner

Monseychabad.com has learned that Rabbi Leibel Groner, Mazkir of the Rebbe, will be the guest speaker at the upcoming Yeshivas Menachem Mendel Lubavitch of Monsey dinner that is being held on Sunday evening, 17 Adar, March 11, at Garden Paradise hall.

The monseyouth Shabbos Mevorchim Tehillim program for boys will take place this Shabbos at 9:00 AM at Tzemach Tzedek followed by Shachris. 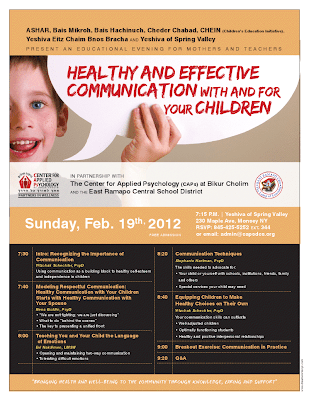 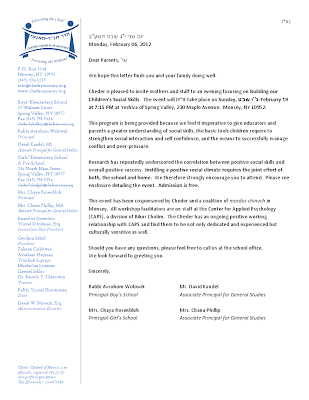