Mazel tov to Avrohom and Channah Dobka Kaufman on the birth of a baby girl!

Shifra and Puah arranges homemade meals from people in the community for mothers of newborn children from our community. If you are able to cook a meal, please sign up on MealTrain or contact Karen Schild at 845-354-4898 or karenschild@yahoo.com. 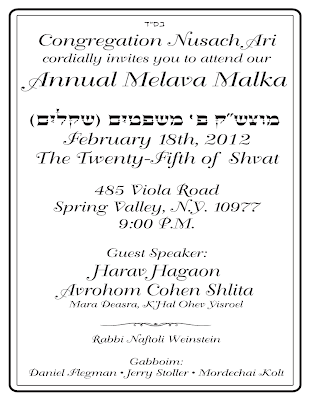 It was a sunny February Friday morning in Monsey, NY. A friend invited me to attend an Estate Sale. I’ve never been to an Estate sale, and am not even sure what they are. For some reason I decided to join along. Perhaps because he said it was just a few minutes’ drive from where we were and it wouldn’t take much time.

“Here’s to new experiences,” I thought, and hopped into his car.

We arrived at the advertised address --- a small attached home. We parked in front and went inside.

The house was small and cozy. People were milling about picking up knick-knacks asking for prices, a dollar fifty for this, four dollars for that, said a good natured middle-aged man.

Turns out the owner is an elderly woman and her daughter and son were handling the logistics of the sale, haggling and making small talk with the slow moving crowed filing through the house.

Deeper in the house I saw a dining room table stacked with all kinds of effects for sale. In the middle was a ceramic Matzah dish and two brass candlesticks. I didn’t pay much attention to them at the time. Not really interested, I thought.

Being my first Estate sale experience, I noticed I was feeling some sadness seeing one’s 50-60 years of memories laid out bare, with people buying bits and pieces of that life. Yet the family seemed cheerful enough which helped me feel better about the whole thing.

At the end we both found something to buy costing just a few dollars, if just to make the owners happy.
On the way out, the older woman, their mother, said to us “Good Shabbos.” We replied same and left.

Driving away, the image of the candlesticks for sale on that dining room table stayed in my mind like a super-imposed image that doesn’t fade easily.

Why am I still thinking about them? I thought. Soon I felt more clarity -- they had a mission I was to do for them and I completely missed the opportunity.

It was close to noon, time to pick up the kids from school. On the way, the candlesticks spoke louder. I felt I understood their plan. I wasn’t going to let them down this time.

I stopped by a bakery and picked up a fresh Challa, the plan becoming more alive, then, after collecting the kids from school and clueing them on our mission, I stopped off at home to pick up two candles and the accompanying glass holders that sit atop candlesticks, and a Shabbat Table Companion book.

We wound our way back to the woman’s house all the while hoping the candlesticks weren’t sold in the meantime.

The plan was now in full motion. I was excited. As were the kids.

We parked in the same spot, piled out of the van and filed inside.

Yup, the candlesticks were still there!

I searched out the older woman and asked her if the candlesticks were for sale.
“Yes,” she replied, going to search for her son to give us a price.
“Eight dollars for the pair,” he said.
“Deal,” I said while pulling out my wallet and giving him the money.

The mother went to the table, took the candlesticks and put them in my hands.
“Here!”

I held them, my kids watching my every move. I then looked her softly in the eye and spoke.

“You know why I came all the way back and bought these candlesticks?”
“No. Not particularly.”

“I came back together with my children to buy them from you so we can gift them back to you, in order so that these candlesticks can stay in your dining room, continuing to illuminate your home every Friday and Holiday night.”

Tears sprung and welled up in her eyes.

Silence fell in the home.

Her son came over to see what’s transpiring, the daughter following close behind.
Mom told them what we’ve done, choking up and unsuccessfully fighting her tears.
It was a very emotionally laden moment.

There were hugs and tears between them. Even the eyes of the strangers rummaging through the estate items ---Jewish and non--- stopped to stare as if overcome by the outpouring of G-dly light radiating from the Jewish souls of this beautiful family.

The mother finally spoke and told us her Hebrew name is Tziporah, she went to Talmud Torah as a child but not much followed.
She said she warmly accepts our gift and “already knows the Brochos (blessings)…”.

On our way out her son said to me, “Just as you offered mom a gift, we want to give you a gift -- here, take the eight dollars back as our gift to you.”
I politely declined and asked instead that they share a part of the mitzvah of lighting Shabbat and Holiday candles to the merit of our own family.
“Agreed!” he said, mom and daughter also nodding their heads.

We left as we came, the way back traveling on spiritual clouds -- that sense of being part of something bigger. Something raw and deep connecting our Jewish souls so quickly, so deeply and so profoundly. It was this feeling that kept us warm on the winter day as we prepared to accept Shabbos.

Above and over everything else, I am glad our children got to experience our unique “transaction.” I hope the experience planted the seeds to have “Mivtzoyim Eyes” -- seeing an opportunity where there isn’t one apparent at first glance.

This trues story happened in 2012. Zalman Goldstein is the founder of The Jewish Learning Group, publisher of the popular SHABBAT TABLE COMPANION, GOING KOSHER IN 30 DAYS, and nearly a dozen outreach books used by Chabad Houses around the world; he is also the man behind the iconic CHABAD CLASSICS music series. He can be reached at Zalman@ZalmanGoldstein.com. 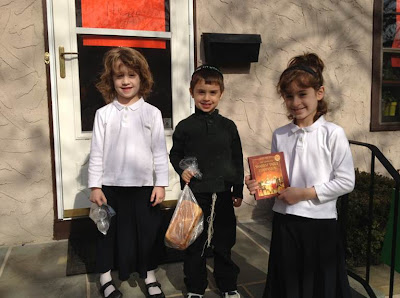 The wares displayed on the table. 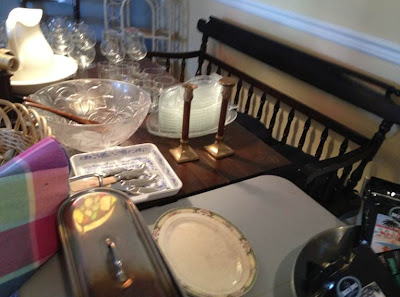 Tziporah with her rededicated Shabbos candlesticks, and the Goldstein kids. 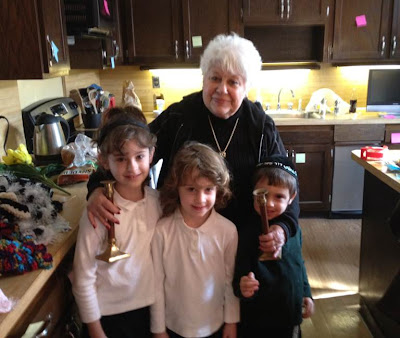