The Rebbe has spoken many times about the importance of every Jewish child having a Jewish education. The Released Time program was created to give Jewish children who are learning in the Public School systems a chance to learn about their Jewish heritage.

We mostly associate Released Time program with kids who do not have homes that reflect the Jewish way of living. However, here in Monsey, there are at least a handful of kids who do have frum homes, yet they still are in the Public School system, due to their special needs.

If you know of bochurim who would be willing to volunteer their time for a released time program, so that these Jewish neshomos can have some formal Jewish education, aside from what they get from their homes, please contact Sadya Engel at Released Time program at NCFJE in Crown Heights at 347-432-4167 or releasedtime@gmail.com and tell him you are volunteering for the Monsey Released Time.

In honor of Yud Shevat, please take on the hachlota to commit yourself for this special cause.

All Anash and Cheder parents are invited to come see our magnificent “Living Museum of our Rich Chabad History” today, Friday, Yud Shvat, February 3, anytime between 10:00 AM and 11:45 AM at the Cheder Chabad Girls School, 246 North Main Street.

Lubavitch on the Palisades school in Tenafly, New Jersey, is looking for a third grade Limudei Kodesh teacher for the upcoming school year (September 2012 - July 2013). 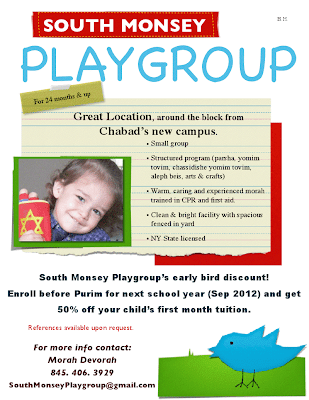