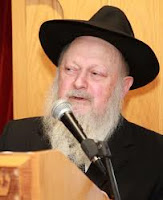 Rabbi Moshe Herson, head Shliach of New Jersey and dean of the Rabbinical College of America in Morristown, will be farbrenging in Monsey at Beis Menachem next Motzai Shabbos, Parshas Bshalach, February 4, at 8:30 PM in honor of Yud Shvat.


Yud Shvat marks the histalkus of the Frierdiker Rebbe, Rabbi Yosef Yitzchak Schneersohn, the sixth Lubavitcher Rebbe, on Shabbos morning, the 10th of Shevat, of the year 5710 from creation (1950). One year later, at a gathering of Chassidim marking the first anniversary of histalkus, the Frierdiker Rebbe's son-in-law, Rabbi Menachem Mendel Schneerson, delivered a maamar entitled Basi L'Gani ("I Came into My Garden"), signifying his formal acceptance of the leadership of the Chabad-Lubavitch movement.

The Rebbe often emphasized that the review of the weekly Parsha, read weekly by Jews the world over, is not only for the sake of reminding ourselves of our long history and what happened to our great grandparents in days long bygone. Rather, the weekly Torah portion is for the sake of educating and instilling within us a more profound appreciation of our heritage and thereby enhancing our observance of Torah and Mitzvos today.

The ten plagues, discussed in these current Torah readings, which were inflicted upon the ancient Egyptians leading up to the Exodus from Egypt , have a message for us today. Let us take the Ninth plague, Darkness, which is in our current Torah reading this week. The Torah tells us that there were three days of "thick darkness." According to the Midrash, the Egyptians could not see, nor even move.

However, for the Jewish people it was different: they had light wherever they lived. The Sages discuss this idea. Does it mean that the darkness did not affect the specific area where the Jewish people dwelt, the Land of Goshen? Or the other hand, does it mean, more mysteriously and mystically, that for a Jew, even in the Egyptian areas, there was light in during this period of darkness?

As explained by the Rebbe, these two opinions relate to our view of the world. One view is that there is a deep separation between the holy (the Jewish area) and the unholy (the idols of Egypt). In the holy realm, it was light; in the unholy realm, it was dark. The second view is that the Jew in Egypt had the power to bring light to the realm of the unholy. Even in the Egyptian areas, where there was frighteningly thick darkness, the Jew could see. This relates to our role in the world. The Jew enters a realm of spiritual darkness, yet he or she has the power to bring light even into that darkness, to illuminate the homes of the "Egyptians," of the apparently secular and materialistic world. This freedom is not just for ourselves. We have the power of light in the darkness of Egypt so that we can bring light to the whole world –the light of Redemption.

As per the custom that everyone should have an aliya on the Shabbos prior to Yud Shvat, there will be extra lainings this Shabbos at Tzemach Tzedek beginning at 8:30 AM in the backroom of the shul and then multiple lainings during the regular laining time.

Beis Menachem will have multiple lainings during the regular laining time.

The Fountain of Youth has eluded searching eyes for centuries. The reason this treasure has evaded so many for so long is simple: people have yet to check my grandmother’s soup pot!

As nearly all Jews will tell you, nothing in the world remedies the winter doldrums or an aching body like a big bowl of grandma’s chicken soup. Yet, what fix exists for the non-physical ailment - an aching heart? As a new college student and Jew long out of touch with his heritage, I learned that there exists no better remedy for a longing Jewish soul than the Center for Jewish Life at Rockland Community College, run by Hillel of Rockland.

As the carrots, sweet onion, and succulent chicken of a soup come together to give it its medicinal properties, so too does the Jewish culture, Torah knowledge, and sense of community that Hillel provides make it a haven for the Jewish student body.

Coming from a non-observant home in Upper Nyack, New York, I arrived at RCC with very little knowledge of Israel or Jewish culture. Like any kid growing up in a mildly religious home, my repertoire was limited to the basics: latkes, dreidels, and yarmulkes.

That is, until I met Rabbi Dov and Shevy Oliver. As the moving force behind Hillel, Rabbi Dov and Shevy used their worldly knowledge and extensive insight to bring the flair and essence of Israel to RCC. One of the Hillel activities that made the greatest impression on me was a campus-wide Israel Fair, providing students with a glimpse into historical Israeli landmarks. Walking from exhibit to exhibit, falafel in hand, my classmates and I witnessed the significance and spirituality of such sites as the Kotel, the holy city of Tzfat, the burial sites of Tiberias and the shores of Eilat. Hillel not only brings Jewish culture to the campus, but also delivers substantive Torah knowledge, with the intent of heightening our moral awareness and responsibilities as Jewish members of humanity.

Rabbi Oliver serves as a spiritual guide and teacher of Torah through such programs as “Nosh for the Soul,” expounding upon ideas in the weekly Torah parshah. Through such spiritual sustenance, I have gained a tremendous insight into the lives of our matriarchs and patriarchs, the historical lineage that precedes me. I have also developed many friendships through my involvement with Hillel.

The foremost defining feature of Hillel is the way it generates a sense of family and togetherness among people of different backgrounds through activities like concerts, lectures, workshops and Shabbat meals. My experience with Hillel was pivotal in contributing to my decision to dedicate all of next year to studying in Israel.

Sean Rugys of Upper Nyack is a sophomore in the Mentor/Talented Student Honors Program at Rockland Community College.

This morning's Tanya shiur for women has been canceled.