Sound like double trouble? Over-employment? Our people started out that way. Moshe could not, would not, lead alone; Aaron had to be there. Moshe's older brother never was quite his associate rabbi. Aaron was vastly more popular. He was the nice guy: arbitrator in congregants' business disputes, mediator in spousal clashes, peacemaker in sisterly spats, and conciliator for anyone with a teenager at home. Moshe was more the patrician than the paternal. The teacher, not the counselor; the lawgiver, not the therapist. Moshe embodied truth; Aaron embraced peace.

Truth demands integrity; peace requires compromise. Torah insists on both, hence a team was needed for the making of a people -- not an individual. Moshe rarely enjoyed public support; his method, leadership qualifications, and integrity were regularly challenged, and accusations of nepotism drained him. Aaron was rarely taken to task, and then only because of his association with you-know-who.

The brothers' dichotomy did not abate with their deaths; the turnout at Aaron's funeral nearly doubled Moses's. Not surprisingly, it was only upon Moshe's passing that despair threatened the people. But while Aaron's popularity earned him a larger funeral, Moshe's instruction earned him the role of leader. Aaron's passing evoked mourning; Moshe's passing created a terrifying void.

Leadership, like money, is appreciated when you don't have it. We need our Aarons and we need our Moshes . One without the other is unbalanced. If we favor the peace over truth because peace does not demand of us and truth does, we will get neither.

Throughout our Torah Parsha this week, we watch their interplay and interdependence. Such a harmonious balance, endures.

Dovid and Jessica Leiser will be making a Bris for their newborn son this Sunday, January 22, at Ashar, 70 Highview Road.

A directory of resources and programs that will benefit Shluchim and Shluchos is being compiled by two Shluchos and will be distributed in the near future. The list will include creative ideas that are useful in Chabad Centers, for daily use or special events and programs. Ideas range from technology, education, entertainers, gifts for baalei batim, Holiday concepts, and more.

"Shluchim spend so much time researching their ideas, only to find out later it is already available," Mrs. Hadassah Geisinsky, Shlucha in the Five Towns, told COLlive. "And the people who have spent time and money to arrange for these items are always looking for ways to get the word out."

The Shluchos working to compile the directory welcome any and all ideas/businesses that can benefit Chabad Houses and Shluchim, at no cost to the business or Shluchim. The only thing the vendor must agree to is offer a shliach 10 percent off his first purchase with mention of the directory.

"It's a win-win situation for both parties involved," says Geisinsky.

To be included in this list please email your name, business, a paragraph describing what you offer, phone number, email address and website as soon as possible to hadassah@chabad5towns.com or yya.nbb@gmail.com.

We look forward to being able to assist Shluchim in the Rebbe's work while helping your business flourish.

There will be a farbrengen in honor of Rosh Chodesh Shvat this Tuesday night, January 24, following the 9:30 PM Maariv minyan at Tzemach Tzedek. 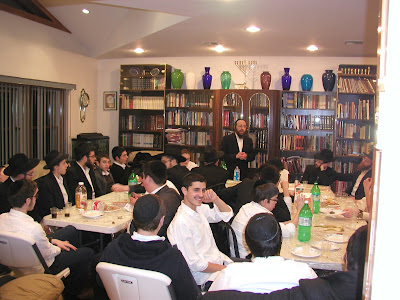 Mazel tov to Rabbi and Mrs. Chaim Dovid and Miriam Kagan on the birth of a grandson born to Mendy and Chana Rochel Zwiebel of Chico, California!