MONSEY — Men, women and children packed dozens of cars fitted with menorahs and wound through Monsey and Spring Valley to mark Hanukkah, the Jewish celebration of light.

The 9th annual Hanukkah parade organized by Congregation Tzemach Tzedek of Langeries Drive was held despite a steady drizzle. The parade lit up the village and brought holiday cheer, before ending at the Spring Valley Marketplace for more festivities.

Earlier in the evening, families gathered at the synagogue where children participated in an arts-and-crafts program, making menorahs out of candy and decorating paper menorahs with sparkly colored powders.

“It’s important to remember that good overcomes evil and to remember the victory from thousands of years ago and the miracles that happened,” said Devorah Drew, 32, whose two daughters, Rivka, 7, and Sara, 3, took part in the craft program.

Jews across the world celebrate Hanukkah, which marks the triumphs of light over darkness, freedom over oppression, and good over evil.

It commemorates a victory ancient Jews had over the Syrian-Greek army, which was trying to rule them.

When the Jews won and rededicated their temple, a one-day oil supply lasted eight days. That is observed with the lighting of the menorah on each night of the holiday.

Sunday night, paradegoers gathered in the parking lot the Spring Valley Marketplace where organizers had put together a holiday spread of doughnuts and latkes for the celebrants. Jewish holiday music played on loudspeakers and teens and coupleschatted and cracked jokes.

“It’s a joyful holiday for us to dance and sing songs and enjoy ourselves,” said Dovid Werdy, 15, a student at the synagogue who was attending the celebration with his friends.

Later, Spring Valley Mayor Noramie Jasmine, greeted the public and talked about the importance of Hanukkah. 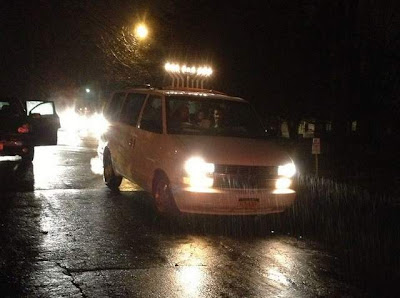 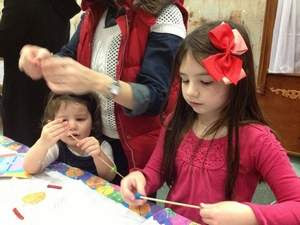