Reminder - Monsey Beis Chaya Mushka will be holding its fourth annual dinner tonight, Sunday, December 11, at the Regency Banquet and Conference Center, which is located within the Comfort Inn and Suites, at 425 East Route 59 in Nanuet.

Mazel tov to Rabbi and Mrs. Yisroel and Sarah Feige Shusterman on the birth of a grandson born to Nachi and Rikki Shusterman of Crown Heights!

Chabad of Suffern to Cook Up Chocolate Menorah 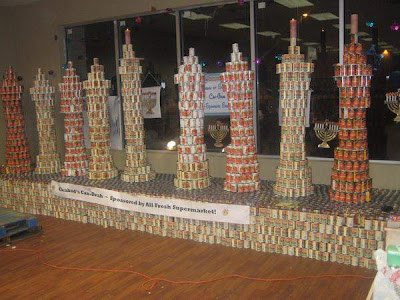 By Mareesa Nicosia, The Journal News

SUFFERN — Legos, tin cans, balloons and jelly beans — one unusual thing they have in common is their use as menorah building blocks during local Hanukkah celebrations of years past.

This year, the Chabad Jewish Center of Suffern's construction material of choice is chocolate. Kosher, nondairy, dark chocolate will be used to construct a 9-foot menorah that will be lit in the village gazebo during the religious organization's "Chanukah in the Chocolate Factory" festival Dec. 22.

The free, public event is the first of its kind in Suffern, although a menorah-lighting is held annually on the lawn of Village Hall.

"We feel that part of the message of Hanukkah is to get it out to the masses ... to share the visions, to share the light," Chabad director Rabbi Shmuel Z. Gancz said. "Especially in the (economic) times we find ourselves these days, it's definitely apropos to put up new venues for people to enjoy the lights."

The Chabad has held a "Hanukkah Wonderland" the last few years, renting storefront space and inviting Jewish families to celebrate the holiday with crafts, movies and music.

Gancz said he asked the village to host a larger festival this year as a way for the Chabad to reach out to more people. The festival will be held instead of Hanukkah Wonderland.

The Suffern organization will join thousands of Chabad centers around the world that stage similar public displays during the eight-day Festival of Lights.

The festival will begin at 5:30 p.m. with the lighting of the chocolate menorah in the gazebo and a performance by the children's choir of the Chabad's Hebrew school. Kids can make their own chocolate decorations to place on the menorah. Then participants will move inside the community center for live music, educational crafts, doughnut-making, candle-making and chocolate-related activities.

As for the leftover chocolate, Gancz said it won't go to waste. "We hope not to spoil the chocolate so we can do something with it," he said. "Hopefully it will be used by the children for other activities."

If You Go
What: Chabad Jewish Center of Suffern's chocolate menorah-lighting and Hanukkah festival.
When: 5:30 p.m. Dec. 22
Where: Suffern village gazebo and community center
Information: Contact Rabbi Shmuel Z. Gancz at 845-368-1889 or rabbi@jewishsuffern.com.


The photo is of a "Can-norah" made in Suffern during one of the Chabad's Hannukah celebrations in past years. It was made out of cans of food that were later donated to the needy.