Nadler Modulars advertises the new Lubavitch of Monsey building on their promotional envelope opener at the Kinus HaShluchim today. 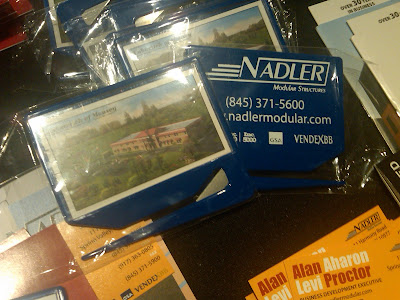 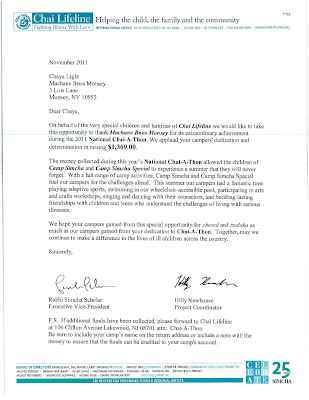 Thank you to all Machane Bnos Monsey campers for your participation. We are looking forward to a great 2012 season!

The Rebbe was once visited by a distraught Jew who complained that his children were quickly assimilating. "What have I done wrong?" the man said despondently. "Why have they strayed from the path I taught them?" At one point in the painful conversation, he expressed his frustration by uttering a popular Yiddish idiom, "Ay, vi shver es iz tzu zein a Yid" – "How difficult it is to be a Jew!" A deep sigh accompanied the phrase.

The Rebbe asked him, "Do you often express yourself this way?" He replied, "In stressful times – and of those there are many – I do."

The Rebbe gently responded, "Then that is what your children often hear, and that is the impression they are left with." With a twinkle in his eye, the Rebbe continued, "There is a different Yiddish saying [from the chorus of a popular Yiddish folk song] 'S'iz gut tzu zein a Yid' – 'It's great to be a Jew!' Switch the refrain, and you will note a difference in your children's appreciation for their heritage...”

There are two ways to influence, inspire, parent, or teach: Through words and persuasive arguments, or by example and silent behavior. The latter often speaks louder. Although no actual words may have passed between the influencer and the influenced, much more than that has been communicated. The truth has been communicated—not a possible truth, or even a probable truth, but an actual truth. Hence, one worth living. In the first manner of affecting another, it is the teacher who approaches the student; in the second manner, it is the student who is drawn to the teacher. In the first approach, it's the parent who wants something for the child; in the second, it's the child who wants something for him or herself. In the first mode, the quantity and quality of the effect depends on the one who inspires; in the second, it depends on the one who is inspired.

Our Parsha deals with the life of Isaac. Although identical to his father in physical appearance, in spiritual make-up, personality, and approach, Isaac was as different from his father, Abraham, as night is from day. They both served G‑d with all their hearts and souls, but they possessed different hearts and different souls. According to the mystics, Abraham embodied unbridled love and kindness, while Isaac personified awe and restraint. Their roles and destinies, as well, could not have been more different. This we know from G‑d's dissimilar responses to them in the face of identical circumstances: There was a famine in the land, aside from the first famine that was in the days of Abram, Isaac, like his father, encountered famine.

Unlike his father, though, who left Israel for Egypt to escape the hunger, Isaac was checked when he thought to retrace his father's footsteps: G‑d appeared to Isaac and said, "Do not descend to Egypt; dwell here in this land…For you are a blemish-free offering, and territory outside of the Holy Land is not worthy of you.” What about Abraham? Was he not, as well, "blemish-free"?

Isaac, due to a unique spiritual sensitivity, was the only one of our forefathers never to leave the borders of the Holy Land. Endowed with a delicate spirit, he didn't take well to un-holiness—then a prevailing force outside of the land of Canaan. Abraham, on the other hand was immune to impurity; therefore, Egypt – a land steeped in paganism and lewdness – didn't rattle him. Abraham was thus cut out for outreach. He learned to relate to a sacrilegious world through learning its mindset, heartbeat, and lingo. He took the heathen pulse in order to determine how best to respond to its lack of spiritual consciousness and how to most effectively administer new life. He shared company with those "who bowed to the dust of their feet" and transformed them into monotheists. Conversely, Isaac was too spiritual to relate to profanity. He did not have it within himself to descend. His dainty spiritual composition was repulsed by even the smallest hint of heretic hogwash. He neither understood nor tolerated a culture that saw value in – let alone worshipped – anything other than G‑d. It would seem obvious, then, that Isaac would have had no effect on his surroundings.

Could a man unable or unwilling to interact with his pagan neighbors effect change in them? If he didn't speak their language, nor they his, how could they ever communicate? But perhaps their means of communication was not made up of words. "Like father like son" did not apply to Abraham and Isaac. Abraham was a man of dialogue and debate. His eloquent discourses and compelling arguments convinced many to join the folds of his faith.

Hence, the verse dubs Abraham a "maker" of souls: "For he would take them under the wings of the Divine Presence and convert them." Isaac, for the most part, kept to himself. One might say that he focused on ascent more than on – his father's forte – descent. Immersed in study and prayer, his was a journey heavenward; he sought to broaden his awareness and deepen his connection with G‑d. He constantly aspired to greater heights. So while Abraham didn't stop teaching, Isaac rarely ceased studying. But what he didn't express in words he articulated in deed. Actions are also universally understood; they constitute a currency accepted by all. Isaac was a walking display of truth.

He was a living example of a servant of G‑d. All who saw him couldn't help but be moved and impressed, their lives forever changed. How would Isaac's influence compare with that of his father's? They shared an identical objective – to bring people closer to G‑d – but since their methods were divergent, presumably so were their results. Abraham descended to the level of his students, while Isaac did not. Consequently, Abraham reached people that Isaac could not. Abraham interacted not only with Philistines, considered in some respects more moral than other nations, but managed to touch the lowly Egyptians as well. His guests included those who were so opposed to monotheism that they were willing to pay a heavy price to maintain their pagan beliefs! Isaac reached no such people.

The people he reached were somewhat refined to begin with, which is why they were drawn to him in the first place. On the flip side, while Abraham descended to the level of his students, Isaac brought his students up to his. In other words, Isaac reached people in a way that Abraham could not. Precisely because Isaac was only seen and not heard, letting his students do the thinking on their own, the conclusions they drew were their own. In sum, Abraham's reach extended further, while Isaac's penetrated deeper.

At home or in the office, and anywhere in between, we often find ourselves in a position of influence. We wonder how best to educate and inspire. We consider how most efficiently to effect change. Words are good, but actions consistent with your message are better. The effect of a well-expressed speech about the graveness of sin falls shorter than the instinctive look of horror that crosses one's face upon its encounter. The best homily about ethics and following G‑d's words pale in comparison to obvious excitement at the opportunity to practice those values.

Arguments can engage, but deeds embrace.