Mendel Ehrenreich, son of Rabbi Tzili and Chaya Ehrenreich, on mivtzoim at the JCC of Rockland in West Nyack. Close to 100 people made a bracha on the daled minim with the Ehrenreich children at the JCC over Sukkos so far. 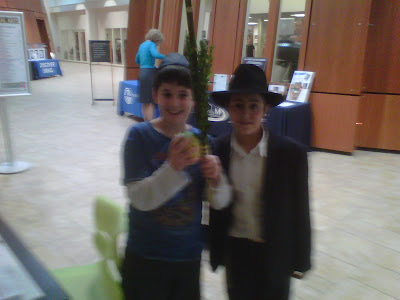 UPDATE - The road has been reopened.

Route 306 is now (Tuesday at 6:30 PM) closed in the area of Mariner Way and South Parker Boulevard due to a fatal shed collapse at 332 Route 306. You may want to avoid the area.

Simchas Torah – the holiday  being celebrated by thousands of Jews the world over this weekend – comes as the culmination of the current Hebrew  month of Tishrei. This is the month in which we celebrate Yiddishkeit with the entire kaleidoscope of Jewish observance – intense prayer, fasting, thanksgiving, and now coming to the holiday of unbridled joy and happiness - dancing with the Torahs and showing our appreciation and pride of being a Jew.

As the Rebbe explains, we dance with the Torahs as they are wrapped up and closed; not an open scroll allowing for a showing a pride of scholarship or depth of Torah knowledge, but as the Torah is at its most basic and essential level – available to and therefore, encompassing all Jews and Jewish backgrounds. And this essential level of Torah, as it relates to every Jew, is the motivation and reason for the intensity of the joy and dancing.

And it is particularly the Jewish children, who are  the symbol of our eternity, and their Jewish education, which have kept our people alive, as reflected in the following true story (excerpted from chabad.org) :

Henryk was very young in 1945, when the War ended and solitary survivors tried frantically to trace their relatives. He had spent what seemed to be most of his life with his nanny, who had hidden him away from the Nazis at his father's request. There was great personal risk involved, but the woman had readily taken it, as she loved the boy.

All the Jews were being killed, and Henryk's nanny did not think for a moment that the father, Joseph Foxman, would survive the infamous destruction of the Vilna Ghetto. He would surely have been transferred to Auschwitz -— and everyone knew that nobody ever came back from Auschwitz. She therefore had no scruples about adopting the boy, having him baptized into the Catholic Church and taught catechism by the local priest.

It was Simchat Torah when his father came to take him. The heartbroken nanny had packed all his clothing and his small catechism book, stressing to the father that the boy had become a good Catholic. Joseph Foxman took his son by the hand and led him directly to the Great Synagogue of Vilna. On the way, he told his son that he was a Jew and that his name was Avraham.

Not far from the house, they passed the church and the boy reverently crossed himself, causing his father great anguish. Just then, a priest emerged who knew the boy, and when Henryk rushed over to kiss his hand, the priest spoke to him, reminding him of his Catholic faith.

Everything inside of Joseph wanted to drag his son away from the priest and from the church. But he knew that this was not the way to do things. He nodded to the priest, holding his son more closely. After all, these people had harbored his child and saved the child's life. He had to show his son Judaism, living Judaism, and in this way all these foreign beliefs would be naturally abandoned and forgotten.

They entered the Great Synagogue of Vilna, now a remnant of a past, vibrant Jewish era. There they found some Jewish survivors from Auschwitz who had made their way back to Vilna and were now rebuilding their lives and their Jewish spirits. Amid the stark reality of their suffering and terrible loss, in much diminished numbers, they were singing and dancing with real joy while celebrating Simchat Torah.

Avraham stared wide-eyed around him and picked up a tattered prayer book with a touch of affection. Something deep inside of him responded to the atmosphere, and he was happy to be there with the father he barely knew. He held back, though, from joining the dancing.

A Jewish man wearing a Soviet Army uniform could not take his eyes off the boy, and he came over to Joseph. "Is this child... Jewish?" he asked, a touch of awe in his voice.

The father answered that the boy was Jewish and introduced his son. As the soldier stared at Henryk-Avraham, he fought to hold back tears. "Over these four terrible years, I have traveled thousands of miles, and this is the first live Jewish child I have come across in all this time. Would you like to dance with me on my shoulders?" he asked the boy, who was staring back at him, fascinated.

The father nodded permission, and the soldier hoisted the boy high onto his shoulders. With tears now coursing down his cheeks and a heart full of real joy, the soldier joined in the dancing.
"This is my Torah scroll," he cried.

Abe Foxman, the national director of the Anti-Defamation League -- the Avraham in our story -- remembers this as his first conscious feeling of a connection with Judaism and of being a Jew.

As the month of Tishrei comes to a close and we look back on the most powerful month of the Jewish year – accepting G‑d's sovereignty on Rosh Hashanah, being forgiven on Yom Kippur, uniting with G‑d and our fellow Jews on Sukkot, dancing our souls and soles out on Simchat Torah – it is now the time to declare our pride in our Jewishness: I am a Jew and I'm proud !

Footnote: Avrohom later immigrated to the USA and attended Yeshiva in NY.  On April 9, 2010, after 65 years, Avrohom and the Soviet soldier were reunited.