The final pledge numbers for the Hayman Family matching gift for Cheder Chabad put the community pledges at more than $13,000, resulting in total donations of more than $35,000.

Welcome to Michel and Leba Abramson on their move to our community (Edison Court)!

Baruch Dayan HaEmes- We are deeply saddened to inform you of the passing of Rochel Dina Labovitch OBM, mother of Y”LT Reb Yosef Yitzchak Labovitch.

In this week’s Torah portion we come across an interesting passage: I call today upon heaven and earth as witnesses for you. I have set before you life and death, blessing and curse. And you shall choose life, so that you and your children may live. (Devorim (Deuteronomy) 30:19)

Do we really need the Torah to tell us to choose life? Which person of sound mind would choose death? The Torah here is presenting a very fundemental concept. The Torah here is reminding us that one must make a conscious decision to live and not just vegetate. And I don’t mean to live it up by living life in the fast lane. To “choose life” means to choose to live a meaningful life, a life committed to values and a higher purpose. Did it make any difference at all that I inhabited planet Earth for so many years? Will anyone really know the difference if I’m gone? Is my life productive or worthwhile?

It is told that when the fist Chabad Rebbe, Rabbi Schneur Zalman of Liadi, wanted to bless Reb Yekutiel Liepler with wealth, he declined the offer, saying that he was afraid it would distract him from more spiritual pursuits. When the rebbe then offered to bless him with longevity, Reb Yekutiel stipulated that it should not be “peasant’s years, with eyes that do not see and ears that do not hear, where one neither sees nor senses G dliness.” Reb Yekutiel was being rather fussy, it may seem. The holy Rebbe is offering him an amazing blessing and he is making conditions!

Yes, he chose life, and he chose to live a life that would be purposeful and productive, and that really would make a tangible difference. He wasn’t interested in a long life if, essentially, if it would amount to an empty life.

As we stand just before Rosh Hashanah, let us resolve to choose life. A life of value and which reflects the beauty and our appreciation of our heritage as Jews. Let us live lives of Torah values and noble deeds. And may we be blessed with a good, healthy and sweet new year.

With heartfelt wishes for a sweet, healthy and prosperous New Year in every aspect, materially and spiritually. 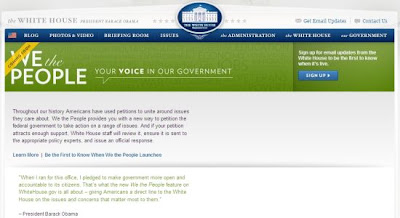 On Friday, September 16, 2011, the Eight Circuit Court of Appeals affirmed a draconian sentence on Sholom Rubashkin, a sentence which is essentially a life sentence for him and his wife and 10 children.

We now have a unique opportunity -- for the sake of justice -- to express our outrage for this sentence and actually make a difference. If it can happen to Sholom Rubashkin it can happen to anyone!

The White House has released just TODAY a new tool to allow people to influence goverment called "We the People." It is essentially a petition site, and they promise: "If a petition meets the signature threshold, it will be reviewed by the Administration and an official response will be issued. And we’ll make sure that the petition is sent to the appropriate policy makers in the Administration." The White House promises an official response to every petition that garners at least 5000 signatures in a span of 30 days.

This is a petition that really matters, so please use this as an opportunity to help Sholom Rubashkin.

Tell President Obama to stop ignoring 47 members of Congress and many others in the Rubashkin case!

Sign this petition today and join the fight for justice for Sholom Rubashkin.

Please forward this to all your contacts and spread the word.

That's right. 47 U.S. Congressmen, along with numerous law professors and U.S. Attorneys, have expressed outrage with the way Iowa prosecutors have handled the Rubashkin case from beginning to end. Well they had their turn. Now it's our time to act.

Our goal is to accumulate tens of thousands of signatures. Yes we can do it!

We have a rare opportunity to let the White House know how disappointed we are that our concerns expressed through our elected officials and many legal scholars have not been taken seriously.

This petition urges President Obama to respond with action to the request of 47 Congressmen and 75 law professors and U.S. Attorneys, including 3 former Deputy Attorneys General -- Philip B. Heymann, Charles B. Renfrew and Larry D. Thompson -- who have in an unprecedented fashion asked the Department of Justice to initiate an investigation in what they called "allegations of impropriety and unfairness in the Sholom Rubashkin case."

Every U.S. citizen 13 years or older with a valid email address can sign this petition.

President Obama is facing elections next year, and he wants to know what is on people's minds. By having thousands of people all across America express their outrage with the overzealousness and misconduct in the case of Sholom Rubashkin, it will send a powerful message that we really do care!

And please don't forget to spread the word and forward this email to all your contacts! 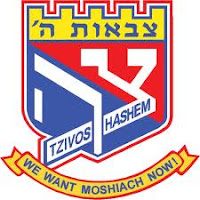 During the past two weeks over 80 children have signed up for Tzivos Hashem of Monsey!

You can start filling in your weekly missions with your parents using the parent account. Within the next two weeks each child who signed up will receive their card along with their sticker book and stickers for each mission. With your miles that you receive for your mission and for the bonus mission every week you will be able to use them for the auction. The first auction will take place on Thursday, November 3rd, Vav Cheshvan.

The siddur specially made for the soldiers in החיל will be coming in around פסח time.

If you have any question please feel free to email Rabbi Wiener at monseyouth@gmail.com. 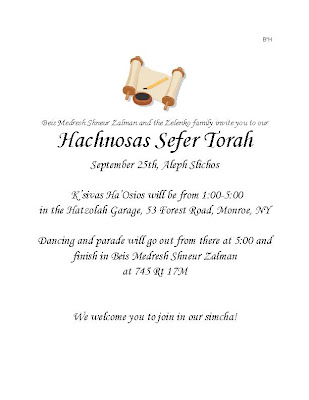