MBCM will be holding its annual dinner, which is always a treat for the community, on Sunday evening, December 11, 2011 the 15th of Kislev 5772, one day after Yud Daled Kislev, the wedding anniversary of the Rebbe and Rebbetzin. More information about the dinner will be announced as it becomes available. 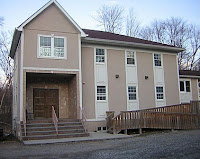 After months of exile, Beis Menachem is happy to announce that they will be returning to their renovated building at 360 Route 306 this Shabbos, Parshas Ki Setzei.

All are invited to join for davening and a kiddush-farbrengen following davening on Shabbos day! 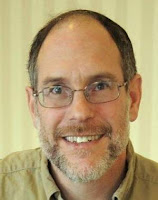 By Laura Incalcaterra and Steve Lieberman, The Journal News

SPRING VALLEY — As the 5-year-old boy critically injured after being shocked by a downed power line remains hospitalized, his father credited the man who tried to save the child with also saving the life of the boy's mother.

David M. Reichenberg, 50, was going to the aid of Reuven Herbst on Aug. 28 when he was killed by the live wire that injured the boy in the aftermath of Tropical Storm Irene.

Reichenberg left behind his wife, Ruth Miriam; daughter Rifka Hadassah, 19; and sons Josh, 14, Eliyahu, 12, and Akiva, who turned 11 just days after his father's death. Reichenberg's survivors also include his father, Harry, of Seattle, and his brothers, Steve, of Cherry Hill, N.J., and Eric, of Croton-on-Hudson.

The family all gathered for a weeklong period of mourning, just weeks after they had gotten together to mark Reichenberg's 50th birthday, friends said Tuesday.

Reuven remained in critical condition Tuesday in the pediatric burn unit at Westchester Medical Center in Valhalla. His father, Yehuda Herbst, also tried to help and was burned by the wire near the family's home at Merrick Drive and Union Road. Herbst credits Reichenberg for saving the life of his wife, Chava Leah Herbst, family friend Rabbi Yochonon Wosner said Tuesday. Wosner is a lecturer at Ohr Somayach in Monsey, a Judaic studies college attended by Reichenberg, who almost never missed a 6:15 a.m. Talmud class each morning.

Reichenberg was not particularly religious growing up in Cherry Hill, but that changed after a summer trip to Israel prior to college, his friend of 25 years, Abraham Stubin, said. It was during a visit to the Western Wall where he encountered Rabbi Meir Schuster, who gradually introduced him to new aspects of Judaism, Stubin said. Once Reichenberg got to the University of Washington in Seattle, he got involved with the Chabad House and over time became increasingly devout. He remained an avid outdoorsman who enjoyed hiking, canoeing and camping, friends said.

The Reichenbergs and the Herbsts are backyard neighbors, friends said. At about 2 a.m. Aug. 28, there was a loud noise in their neighborhood after a transformer blew and downed a wire. At about 11:30 a.m., Reichenberg went to check on the Herbsts. He was standing with the boy and his parents when Reuven came into contact with a fence that had been electrified by the wire, Wosner said. Reuven was shocked and burning, sending both his father and Reichenberg to his aid. The father was wearing rubber boots and believes they helped insulate him against a fatal electric shock, Wosner said. Reichenberg tried to grab the insulated section of the downed wire, and by doing so likely saved the boy's mother, who was about to grab her injured son, Wosner said.

Orange and Rockland Utilities Inc. came under criticism for its response to the downed wire and Spring Valley Mayor Noramie Jasmin has said the company failed to make a timely repair even after village police told the company about the wire. Spring Valley police Detective Reginald Anderson said an investigation is continuing. Stubin said the family had suffered great challenges over the years, including a fire early in the Reichenbergs' marriage that left the couple with little more than the pajamas they were wearing when they escaped the flames. A son born with developmental disabilities and in need of medical and other care has also challenged the family's resources. Reichenberg owned a Sign-O-Rama franchise, and signs, Stubin said, were among the items business people and others eliminated from their budgets in the tough fiscal times. But through all the challenges, Stubin said, Reichenberg was always upbeat. "He had tremendous character and strength," Stubin said. "He was a delightful person."

A fund has been created to help the family of David M. Reichenberg, who was killed Aug. 28 while trying to help a 5-year-old boy who was shocked and burned by a downed electric wire. Reichenberg is survived by his wife and four children. Organizers said all donations would go directly to the family. Checks can be made out and mailed to: Ohr Somayach — Reichenberg Fund, 244 Route 306, Monsey, NY 10952. Get more information at www.reichenbergfund.org.

Congressman Eliot Engel at the Kotel

Congressman Eliot Engel (D), the U.S. Representative for New York's 17th congressional district, which includes parts of Rockland County (and the Town of Ramapo), puts on Tefillin and blows the shofar at the Chabad booth at the Kotel this week. 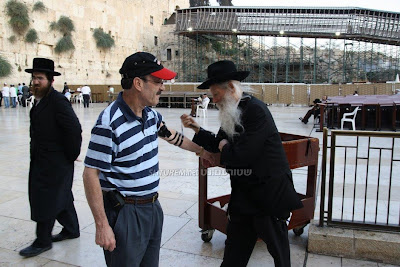 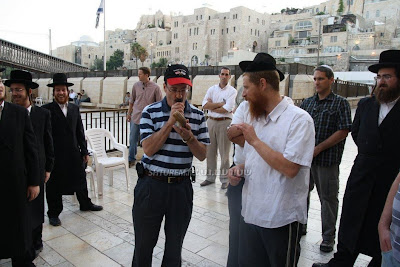