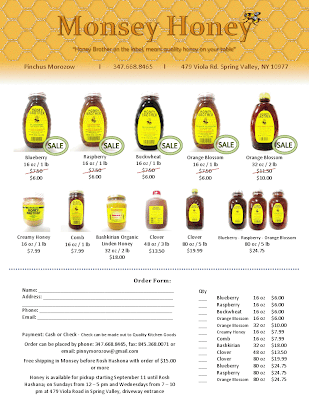 The contents of a beautiful home will be available for sale this Sunday, September 11, from 10:00 AM to 4:30 PM at 2 Altman Court (next to Ramapo High School).

Shiur on Teshuva at Heichal Menachem 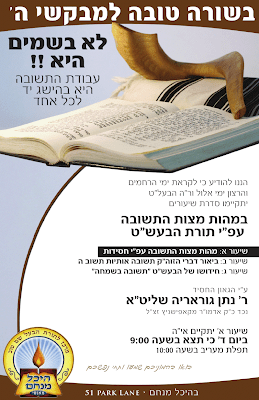 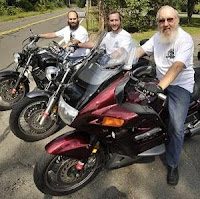 A tough-looking, leather-clad gang of Hasidic bikers who call themselves "Rebbe's Riders" are cruising the tri-state area, bringing God's word to other motorcycle-riding Jews they meet on the road.

The Riders -- members of the Brooklyn-based Lubavitch sect -- say their love of choppers gives them something in common with Jews who might have strayed.

"If a rabbi walks into a bikers club, he doesn't exactly fit in. But if he comes riding up on a bike, doors open to him," said Jonah Halper, 30, who founded the Riders earlier this year. "

[Some fellow Jews] make comments that what we do is not a Jewish thing. They say, 'How can you ride bikes as Jews and say it's for a Jewish purpose?' " Halper said. On the road, the Riders get more respect -- especially from other bikers. "No one sees the Rebbe's Riders and says, 'Who are you guys?' " Halper said. "It's not like the Crips and Bloods. There's a certain kind of respect you have for other riders that transcends lifestyle or creed.

When we pass a gang on the road, they wave and we wave back." They sport cool colors -- T-shirts with a logo of a bearded Hasid wearing a wide-brimmed fedora and badass sunglasses, à la ZZ Top.

Since their founding earlier this year, the Riders say they have befriended several non-religious Jews at biker gatherings -- some of whom rode with them in a Jewish parade in Crown Heights in May.

"A lot of bikers have this rough image with their jeans and vests and tats, but they're really not that way when you talk to them," said member Moshe Reitman, 60, who, unlike some of his Harley-riding brethren, rides a red Honda ST11.

The Riders' moniker was inspired by the late Lubavitcher Rebbe, Rabbi Menachem Schneerson, whose thousands of disciples proselytize around the world. "I get that the Angels have a negative connotation, but there's not something inherently wrong with a motorcycle gang if there's a higher purpose," Halper said. "That's a good thing. Debauchery is a bad thing."