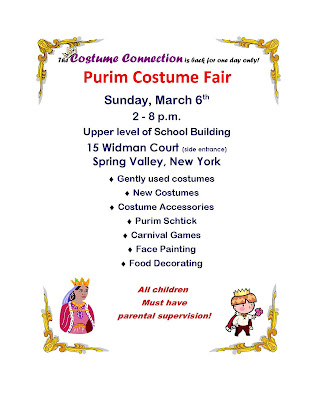 What started out as a simple idea to sell a few costumes has blossomed into a full-fledged event.

Thank you to the people who have so graciously offered their help so far! We are still looking for volunteers (eligible for e-credits) with costumes, running food concession, setting up and breaking down.

Costumes can be dropped off at either the boy's or girl's schools. Arrangements can also be made for donations to be picked up. If you have costumes that you would like to donate or if you can volunteer please contact Karen Schild at 845-354-4898 or karenschild@yahoo.com.

As a special offer to Cheder parents, if anyone has a specific request for a Purim costume, contact Karen Schild and she will set aside something special for you!
No comments:

Thank you to the following 13 families for generously sponsoring the utility payments for K'hal Tzemach Tzedek.

The Chinese Auction Gala Event to benefit Cheder Chabad of Monsey is being billed as "The Most Memorable Women's Event of the Season"!

The evening, which is taking place on Sunday, May 29th, will feature:
You won't want to miss this event! More details soon to follow. Order tickets early as space is limited and the event is predicted to be overbooked!
No comments: 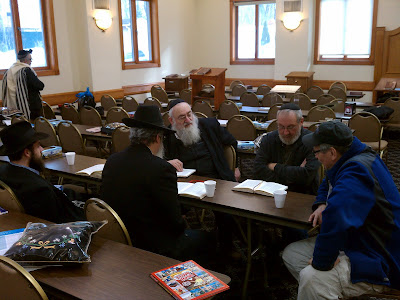 A new set of trading cards is helping Jewish children keep their foodstuffs straight, teaching them about the world of blessings made before eating.

While many can recall the blessings made over wine – such as at a Sabbath meal – or on bread, there are in fact, six distinct blessings, known in Hebrew as brochos. It can be a confusing melee for anyone learning about the intricacies of Jewish practice, a fact that led Rabbi Moishe Wiener, a fourth-grade teacher at the Chabad-Lubavitch day school in Monsey, N.Y., to come up with a way to make these oft-repeated blessings both accessible and fun.

According to Wiener, making a blessing on an apple – or brownie or bowl of cereal – cuts right to the core of Jewish life.

“We thank G-d for granting us the possibility to derive benefit from His creations in this world,” explains Wiener. “It is our way of asking permission.”

The Know Your Brochos cards feature different colors corresponding to the six types of blessings: on bread, on wine, on bread-like snacks made out of grain, on fruits, on vegetables, and on animal-based and processed food.

The front of each card sports a picture of a food and its corresponding blessing, as well as the food’s name in Hebrew, such as gezer lavan for parsnip and mishmeshim for apricots.

Wiener sees the cards as a great resource for teachers, who can give them out as prizes.

“Is is a very effective tool when accompanying a blessings curriculum,” echoes Rabbi Nochem Kaplan, director of the education office at Lubavitch World Headquarters.

Backings feature “fun food facts,” such as how a specific fruit got its name or a passage from the Talmud about that particular food. The card for bananas, for instance, tells children that “the cluster of bananas sold in supermarkets is known as a hand, while the individual bananas are called fingers.”

Wiener says he got the idea from Laffy Taffy, a kosher candy whose wrapper contains different jokes and factoids. The first thing kids do, says the rabbi, is read the wrapper before eating the candy.

“Kids love the facts and they internalize them for many years to come,” says Wiener.

Rabbi Yaakov Klein of Torah Umesorah, a Jewish educational institution, calls the cards “an impressive piece of work. This is a great educational tool, and with not so many Jewish trading cards out there, this is a great start.”

“The kids are really excited about the cards,” adds Rabbi Yossi Rosenblum, principal of the Yeshiva Day School in Pittsburgh, Pa., “It’s been a tremendous success in our school.”

“It motivates kids,” says Gil Hami, an educator at the Hebrew Academy of Morris County, N.J., “It’s creating an entire atmosphere of making blessings on food at the school.”
No comments:

Boruch Dayan HaEmes - We are deeply saddened to inform you of the passing of Mr. Shmuel Mendel Wise OBM, father of Tibadlu Lechaim Tovim Yehuda Wise.

The levaya will take place tomorrow, Friday, February 18, at 10:00 AM at the Mount Richmond Cemetery, 420 Clarke Avenue in Staten Island.

Yehuda will be sitting Shiva in Monsey through this Monday afternoon, February 21, at the Abramowitz home, 6 Zabriskie Terrace.