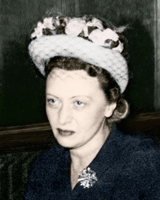 There will be a farbrengen for men in honor of Chof Beis Shvat this Thursday night, January 27, following the 9:30 PM Maariv minyan at Tzemach Tzedek.

Chof Beis Shvat is the Yahrzeit of Rebbetzin Chaya Mushkah Schneerson, wife of the Rebbe, in 5748 (1988). For a biography of the Rebbetzin please click here.
No comments:

According to the Journal News, the East Ramapo School District is seeking to incorporate a private special-education school for 70 Yiddish and Hebrew speaking students, Rockland Institute for Special Education (RISE), into the public school system.

District administrators contend that absorbing the school, which is run by Yeshiva Ohr V'Daas, will reduce the number of special-education students attending classes outside the district by bringing each RISE child into the public school system.

The superintendent has said incorporating the school and reducing out-of-district tuition costs would alleviate at least one situation cited by a state Education Department Quality Assurance Report released in August, the district's tendency in recent years to improperly place special-needs students outside of the school district.

Nathan Rothschild, president of the school board, described the RISE plan as a pet project on which he has worked extensively. He said that the takeover of the school, which is in financial straits to the tune of $3 million, is supported by the state Education Department and that he believes it should be supported by the board.

Click here to read the entire article.
No comments:

At the Monsey Beis Chaya Mushka dinner last night it was announced that several friends of the school have grouped together to create a Matching Funds Incentive.

They will match dollar-for-dollar any monthly contributions made to MBCM of $20 to $30 a month for the next nine months. Meaning, every $180 ($20 for 9 months) contributed by you results in MBCM receiving $360!

We turn to you now to please help us with a pledge above and beyond what you already do for us. It’s never easy, but we ask you to search in your hearts for a place which will allow you to pledge these much needed monies.

To be eligible for the Matching Funds Incentive, all pledges must be made before this Shabbos, Parshas Mishpatim.

Please contact Rabbi Kagan at 845-538-7484 or rabbikagan@monseybcm.com with your pledge.

We thank you in advance for your generosity!
No comments: