Looking for two teachers for the 3rd grade and 4th grades of our Hebrew School which is located at Viola Elementary School on Route 202 and takes place on Tuesday and Thursday from 3:30 to 5:30 PM.

It’s cold outside. Come warm up your soul and support one of the most fantastic and exciting events Monsey has seen in a long time. Call now to book your tickets for the Women's Concert "Uniting Women through Song” featuring Chanale Fellig that will benefit the Cheder. There will also be a raffle at the concert and the first prize is a pearl necklace valued at $500!

Please call 845-356-1213 ext. 4 to order tickets ASAP as the concert is this Sunday. Order some for your friends and neighbors too. Tickets can also be purchased at Tuvias or Ruthies.

If you or your children are able to sell raffle tickets please call Michal Rimler at 845-678-3342.We are offering great prizes for those that sell tickets.

Looking forward to seeing all women and girls together, in unity, at the concert! 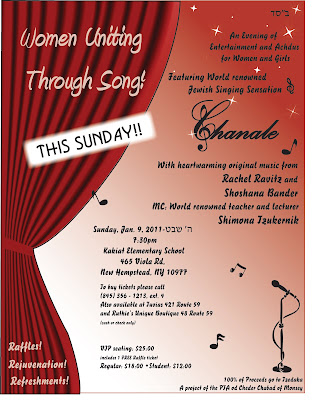 Finkelstein Opts Out of Library Network

By Alex Taylor, The Journal News

SPRING VALLEY — Cardholders at the Finkelstein Memorial Library have been put on a no-holds policy at other Rockland libraries after a switch to a new computerized circulation and reference system.

In November, Finkelstein became the first of 47 member libraries in the Ramapo Catskill Library System to stop using an automatic network services program that handles countywide circulation, borrowing registration, an online catalog, reserves and interloan for libraries in Rockland, Orange, Sullivan and part of Ulster counties.

Library Director Robert Devino said the decision came after longstanding complaints from patrons and librarians over technical glitches and an increase in the annual cost to use the network, which jumped to about $90,000 this year.

"We have been talking about this for years," Devino said, adding he had brought the issue up with the board of the Ramapo Catskill Library System with little progress. "We just were not happy with the quality of service."

With 400,000 books and materials , Finkelstein is the largest library in Rockland and in the Ramapo Catskill Library System, serving a population of about 100,000 in the East Ramapo school district. The library's budget for 2010-11 is $7.14 million.

Devino said the new circulation and reference system is the same as New York Public Library's and will allow the library's cardholders to interface in French, Spanish and Russian, among other new or improved features. The cost is estimated at $100,000 over the next three years.

The move to a new system came despite opposition from other member libraries, which voted 41-5 last month to prohibit Finkelstein Memorial Library cardholders from placing holds on library books, said Robert Hubsher,executive director of the Ramapo Catskill Library System.

As a result, Finkelstein cardholders will no longer be able to put a hold on books at other libraries in the system, although they will continue to have acess to Ramapo Catskill Library System's online catalogs and can check out books.

Hubsher said other libraries were concerned because Finkelstein continues to be the largest net-borrower in the Ramapo Catskill Library System. According to his statistics, cardholders from the library borrowed 280,000 items in 2009 and account for 20 percent of patronage at many of Rockland's other public libraries.

"In principle it's fine," he said. "In reality it's becomes the responsibility of the library to local taxpayers who pay its bills."

In an interview Thursday, Devino acknowledged net-borrowing is a problem. Finkelstein will continue to allow cardholders at other member libraries to place holds on their books, he said.

Several Finkelstein patrons said access to books at other libraries was a critical resource and expressed reservations about the library's choice of the new circulation and reference system.

Rip Hayman, an author of maritime history and a longtime library patron, said he feared information would now be less freely available throughout Rockland County.

"There is an erosion of acess to information," said Hayman, 59, of Pomona, as he walked out of the library, carrying a stack of books under his arms. "People won't be able to find what they want to know."

Phyllis Cassover, 81, of Monsey said the the new no-holds policy at other libraries is an "inconvenience ."

"My granddaughter is a big reader, and she dislikes it even more than I do," she said.
No comments:

There will be a farbrengen for men this Wednesday night, January 5th, following the 9:30 PM Maariv minyan at Tzemach Tzedek in honor of Rosh Chodesh Shvat. Thanks to Tzvi Jacobs who is sponsoring this farbrengen in honor of his birthday!

Shacharis on Thursday morning, Rosh Chodesh Shvat, will begin at 7:00 AM (not 6:45 AM).
No comments: