Save the Date - Bonei Olam Dinner

Mark your calendar!
Bonei Olam, an organization that helps couples (including many couples from the Chabad and Monsey communities) that are experiencing infertility realize their dreams of having a child of their own, will be having a dinner in Monsey at Ateres Charna on Sunday, December 19, 2010.

Rabbi and Mrs. Avremel and Baily Wolowick and Mr. and Mrs. Hershel and Chaya Rosenbluh are hosting this event for our community.

Please click here to take out an ad in their honor. 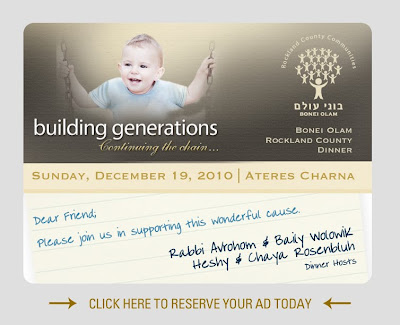 Click here to reserve your ad today!
No comments:

Kiddush at Tzemach Tzedek This Shabbos

The Kiddush-Farbrengen at Tzemach Tzedek this Shabbos, Parshas Miketz, is being sponsored by Binyomin and Keren Kaplan in honor of the recent birth of their daughter Aleeza and by Moshe and Tzipora Reitman in honor of Moshe's 60th birthday and liluy nishmas Tzipora's father Mordechai ben Yehuda Ber whose yahrzeit is this Shabbos, 27 Kislev.
No comments:

Mazel tov to Michoel and Aliza Abel on the birth of a baby girl!

Shifra and Puah arranges homemade meals for mothers of newborn children from our community. If you are able to cook a meal(s), please sign up on Meal Train or contact Karen Schild at 845-354-4898 or karenschild@yahoo.com.
No comments:

When I was born, I was named in a synagogue and given a Hebrew name. But growing up, I was not religious, and I still am not very religious. Even though I am Jewish, I celebrated both Catholic and Jewish holidays. The reason is that my grandparents (my mother’s parents) raised me. My grandfather was Catholic, so we celebrated his holidays, Christmas and Easter, while my grandmother (who is Jewish) and I also celebrated Chanukah and Passover.

At the age of 10, I was given the choice of continuing dance lessons or starting Hebrew school to learn Torah and prepare for a bat-mitzvah. I chose dance school. Since I didn’t understand my religion or Hebrew, I didn't feel Jewish. I felt like I was just living without a religion.

All that changed when I encountered Hillel at SUNY Rockland, where I have been a student for two years. I became aware of Hillel in my first semester, but I didn't join right away. I was very much afraid of not being accepted into Hillel because I didn't know a lot about Judaism. I didn't understand or speak Hebrew, and I felt I was not “Jewish enough.”

During my second semester, with some encouragement from my friends who were active in Hillel, I overcame my fears and decided to try it out. The first time I met everyone was at a Purim party in a local kosher pizzeria. That was a lot of fun and a bit overwhelming at first because I didn't know anyone. I felt very welcomed at the Purim party, and have been active in Hillel since. After the party, Hillel put on a Global Jewry Fashion Show, which I helped organize, and I also performed in it. Helping out with this event made me feel very much part of the club, and I also learned a lot about famous people in Jewish history and Jewish styles and fashion over the years.

There are two wonderful people who have made my Hillel experience so great: the directors, Rabbi Dov Oliver and his wife, Shevy. They are both always there at every event, and they are also always there when you need someone to talk to.

Hillel also gave me the once in a lifetime chance to go to Israel for free this past summer on a trip led by Rabbi Oliver with Birthright Israel. While in Israel, I felt very connected to Judaism and found my place in my religion. The trip itself was an amazing experience. I met other Jewish young adults from all over who were just like me. But the most amazing part of the trip was the chance to reverse my dance lessons decision; I celebrated my bat mitzvah, together with my close friend Ashley, at the holiest place in the world, the Western Wall! It was very, very special, something I will treasure forever.

Hillel has been great to me, and showed me that there are all types of different Jews out there. It gave me the chance for the first time in my life to really enjoy being Jewish.

Anjelica Pagnozzi, 20, of Pomona is a sophomore and an active member of the Hillel at SUNY Rockland, a beneficiary of the Jewish Federation of Rockland County.
No comments:

Mazel tov to Rabbi Ben-Tzion and Ruthie Saloff on the birth of a grandson born to Rivka and Ariel Baror of Yerushalayim!
No comments: