Boruch Hashem many boys took part in saying תהלים שבת מברכים! May all the תהלים said during שבת מברכים bring a good year in everything for everyone!

The following were the winners of the שבת מברכים תשרי raffle. 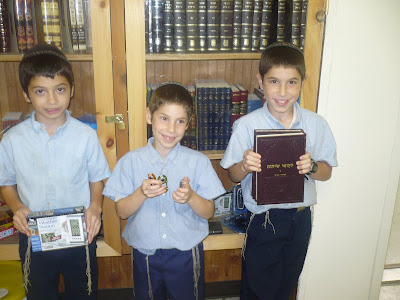 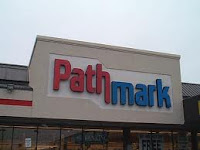 There was a tinge of sadness in the voice of Kevin O’Brien, Vice President of Sales at Manischewitz, when he learned that the Pathmark on Route 59 in Monsey would close in mid-October.
It will be one of 25 locations to be closed by A&P, the parent company of such brand stores as Pathmark, Waldbaum’s and Foodtown.
O’Brien, the Brooklyn born Irish-American, is credited by the kosher food industry as being a pioneer in designing large supermarkets that catered to kosher consumers of all kinds, including Chasidic Jews. O’Brien was no stranger to servicing niche markets. Before coming to the Pathmark store that served the large Jewish community there, he had managed stores in the Bronx and Westchester, each with diverse ethnic populations. Kosher food industry officials credit O’Brien with being a “quick study,” so much so that he quickly recognized that he would have to go beyond the kosher set that was common in those days, namely candles, matzoth, jars of gefilte fish, grape juice and some other items that barely took up a few linear feet of shelf space. His only competition in Monsey was several small mom and pops, a far cry from the large independent kosher grocers of today like Rockland Kosher and Wesley Kosher.

Nathan Herzog of the Royal Wine Company (Kedem) recalls that O’Brien came to pick up hot off the production line grape juice. “I told him to let it cool for a day before selling.” But O’Brien quickly turned it into a merchandizing bonanza, telling customers that the store’s kosher products were so fresh that the juice was still warm. Herzog appreciated the instant up tick in business due to O’Brien’s creative and aggressive program. He would leave a thank you note each week with the cashier to be handed to O’Brien for the business. O’Brien used to kid Herzog’s wife by pointing her to the aisle where she could “buy” the grape juice.
To fill the needs of his customers, he had to find small purveyors who could supply him with Cholov Yisroel dairy products and even Belz chickens with a Badatz certification. Many purveyors recall how O’Brien literally taught them how to do business with a large chain like Pathmark.
To their credit Supermarket General, the parent company of Pathmark did not stand in his way and virtually gave O’Brien carte blanche in building what became the first model kosher store within a supermarket. At one point 60% of the store’s customers were kosher consumers. He would be the only store manager in the chain whose busiest day was Thursday and the quietest Shabbos.
In addition to stocking every section of the store with kosher products, including refrigerated and frozen, O’Brien made sure to have plenty of diapers on hand for the large families in the community and even flowers for Shabbos. He covered and ultimately removed magazines that were offensive to his clientele. He learned to understand that the Jewish calendar was different every year and planned accordingly for the busy Jewish holiday season, especially Passover.
Word of the store’s considerable kosher offerings spread throughout the Northeast, attracting customers from all over North Jersey and even Connecticut. The corporate heads of Supermarket General referred to O’Brien as their “Irish-Jewish nephew.”

O’Brien had left the Monsey store but returned after a short hiatus. He used his considerable knowledge of kosher in senior positions in the corporate offices of Supermarket General and then with Wakefern, the parent company of ShopRite. He is credited with moving ShopRite into a leadership position in kosher. Said Herzog: “Kevin had the foresight to recognize the opportunities in kosher and became the architect of history in the making.” So it is no wonder that even as he helps a resurging Manischewitz, there is a tear that rolls down his face at the news of the Monsey closing for a past that the kosher community will be eternally grateful to. After all, it is not only part of the history of kosher, it is his legacy.
No comments: 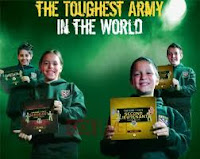 Information on how boys in grades 3 through 6 can register for the new Tzivos Hashem of Monsey program will be posted after Sukkos. For now, the children can do the missions and their accounts will be updated once they register.

The following is a brief summary on how the החיל program works. Every child who registers gets an account with Tzivos Hashem of Monsey. When a child completes their tasks (tasks make up missions) he earns miles. With their miles they can buy thing from the Tzivos Hashem store. For every mission a child completes he earns a sticker with the name of that mission on it. A specific number of stickers add up to a medal. The more medals a child has the higher rank he become in the army of Hashem! In addition to this any child that registers gets the monthly החיל magazine as well as many other things from Tzivos Hashem. 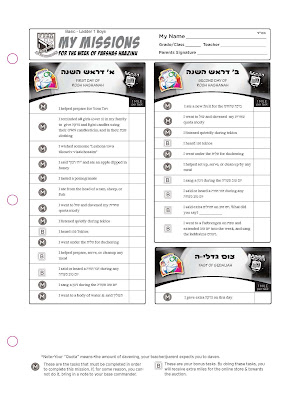 If you would like to order Chinuch Esrog Set(s), priced between $12 and $25, please reserve no later than this Sunday night, Tzom Gedalya, to Ephrayim Keller at 718-778-0804 or esrogim@hotmail.com.
No comments:

I am looking for a family in Monsey to host my 13 year-old daughter for the month of October.

We are in the midst of moving to Monsey from Postville, Iowa and I am unable to be there myself until November (perhaps earlier). Chaya Leah is in 8th grade and will be attending Cheder Chabad. 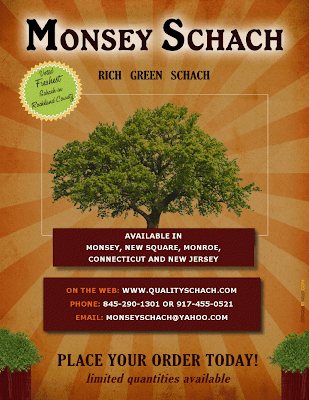