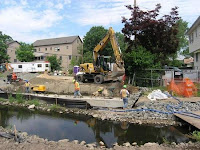 SPRING VALLEY — After being closed at Morris Road for nearly two years, forcing traffic onto side streets, Union Road will soon be reopened with the installation of a temporary bridge.

Reopening the thoroughfare is targeted for mid-July, village and county officials said Monday. The road is blocked off in both directions at Morris because of the closed bridge.

The bridge is part of a multimillion-dollar drainage plan to end decades of flooding that has plagued residents along Stonehouse Drive, Morris Road and Francis Place.

The drainage plan, in the planning stages for years, is being done in three phases by the county and Spring Valley.

The Spring Valley Board of Trustees last week approved an $800,000 bond to finance drainage improvement work in the Stonehouse Drive area.

The work involves installing a new network of catch basins and modifying the storm-drain system.

The county's portion of what's called the Pascack Brook Improvement Project involves installing a new culvert and enclosing the brook to contain floodwaters.

The total project is expected to cost the county about $10.5 million, of which $7.8 million has been bonded.

The first order of business is opening Union Road. The bridge had deteriorated and needed to be closed.

Pilings have been installed as the county awaits the arrival of the temporary bridge from the Midwest, where it was constructed, county Highway Superintendent Charles "Skip" Vezzetti said.

Spring Valley Mayor Noramie Jasmin said that reopening the road is a major priority and that village officials worked with County Executive C. Scott Vanderhoef, his administration and legislators to get it done. She set the reopening for mid-July.

The final drainage repairs will take longer. She said the $800,000 for the village's portion of the work would be bonded over 10 to 15 years.

She said the village still is looking to get money for the project from the federal government.

"People there deserve to live without flooding," Jasmin said.

The homes in the neighborhood were built on wetlands in the 1960s, and flooding has been a constant problem for more than 30 years. Part of the problem was because the bridge was obstructing the flow of the Pascack Brook.

Spring Valley and the county became partners in the project because the Pascack Brook is a county waterway, but the village maintains Union Road.

In 2003, the Union Road bridge was closed for eight months after it was deemed structurally unsafe, forcing cars to detour through the neighborhood's side streets.

Vanderhoef said a lot problems have delayed the drainage project and the replacement of the bridge. He said the contractor had difficulties with the temporary bridge.

Vezzetti also has said a county investigation found that flooding was occurring because the village under previous leadership didn't properly maintain its storm drains and pipes.

There also were delays as Spring Valley went to court to acquire the easements for the work.

Vezzetti and Vanderhoef said Verizon delayed the project by at least six months by failing to perform work on time.

"We've had construction problems and logistic problems," Vanderhoef said. "We've been frustrated along the way. We've pulled together with Spring Valley and others."

"For decades, the residents of this neighborhood have received as many buckets of political promises as they had buckets of floodwater in their basements," Jasmin said.

"I promised action, and I am taking action. No more buckets filled with empty promises."
No comments:

As you know, the Rebbe greatly emphasized the importance of reaching out to college students. Chabad communities today, including our own, are filled with people whose Yiddishkeit was sparked on campus.

The Center for Jewish Life at SUNY Rockland is once again publishing a beautiful, full-color Jewish Calendar for 2010-11/5771, which will be widely distributed and will include our upcoming events and activities.

We invite your participation in this calendar through personal dedications for yahrzeits, birthdays and anniversaries. Your dedication in the calendar creates a fitting tribute to your family member while helping us impact thousands of Jewish students and faculty!

Each dedication is $36, or 3 for $100. Please use the form below. We appreciate your friendship and support! 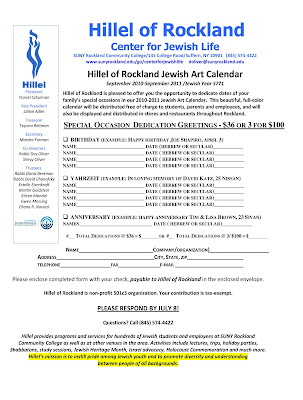 Gershon Sandler invites the community to a Farbrengen/Chanukas HaBayis for men this Thursday night, July 1st at their new home, 10 Hidden Glen Lane, at 9:45 PM.

Rabbi Zalman Dubinsky from Morristown will be farbrenging.
No comments:

Mazel tov to Rabbi Leibl and Chana Oster on the birth of a grandson born to Zalman and Nechama Oster of Toronto!
No comments:

Drop of your little ones at camp and drive over for a cup of hot coffee and a bite of Torah! Encouraged by the Rebbe's directives and inspired by Mrs. Esther Jacobs, N'shei Chabad Women will be learning Hilchos Beis HaBechira each weekday morning during the Three Weeks.

This week, the gathering will take place from 10:00 AM to 10:45 AM, Wednesday through Friday, at the home of Yehudis Abramowitz, 6 Zabriskie Terrace.

All women and older girls are welcome!
No comments: