Massive Turnout for Rubashkin in Monsey 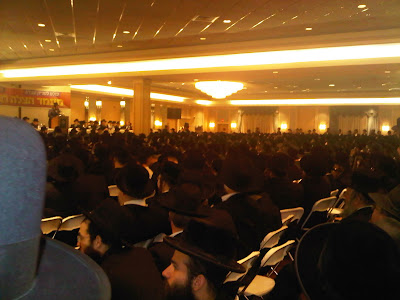 By Matzav.com
The latest kiddush Hashem in the Rubashkin saga took place last night in Monsey, New York, where some 3,000 men jammed The Atrium hall on Route 59 for an asifa on behalf of Reb Sholom Mordechai ben Rivkah.

“There is no way to describe what we were feeling,” one attendee told Matzav.com in the wee hours of this morning following the event. “It was an incredible display of achdus, as thousands - Chassidim, Litvishe, bnei Torah, baalei batim, all types - gathered to give chizuk and get chizuk. What a gathering! What a display of unity.”

In addition to those who personally attended, a staggering 12,000 people listened to a live teleconference of the event on the Chazak Hotline, sponsored by the Chofetz Chaim Heritage Foundation. In fact, additional lines had to be set up at the last moment to handle the barrage of phone calls from people all over the world who wished to hear the speeches.

Speakers included Rav Menachem Meir Weissmandel, rov of Nitra in Monsey, former rav hamachshir at Agriprocessors, and a defense witness in the recent trial; Rabbi Yerachmiel Simins, noted attorney at law and legal advisor in the Rubashkin case; and Rabbi Pinchos Lipschutz, publisher of Yated Ne’eman and chief advocate in the Rubashkin case who has spearheaded the global effort to help Reb Sholom Mordechai.

Shortly after 11 p.m., following Rabbi Lipschutz’s speech, Mr. Mark Weinhardt, one of Sholom Mordechai’s defense attorneys in the state trial who made a special trip to New York to attend the event, was presented with an award for his efforts in this case as the crowd broke out into loud applause. The award was presented by Rabbi Lipschutz, who read the text of the plaque that was presented to an obviously touched and moved Mr. Weinhardt.

The highlight of the evening was clearly the presentation of Attorney Weinhardt, who shared some fascinating details of the Rubashkin case and his involvement. The tremendous crowd sat riveted as Weinhardt shared the ups and downs, and the frustrations and day-to-day challenges, experienced in the recent month-long state trial. He expressed his belief in the justice system, and said that just as justice was served in the state trial, he believes that, ultimately, justice will be served, perhaps via appeal, in the federal trial, with sentencing slated for June 22 by Judge Linda Reade.

Weinhardt’s speech was punctuated by numerous rounds of applause for Mr. Weinhardt himself, for his fellow lawyers and their families, and for all those who have given of themselves to ensure a proper defense.

Mr. Weinhardt concluded his speech at about 11:50 p.m. and was followed by the keynote speaker, Rav Shimon Zev Meisels, rov of Bais Medrash Beirach Moshe in Monroe, who delivered a drasha in Yiddish.

The final speaker was Reb Sholom Mordechai’s son, Reb Meir Simcha Rubashkin of Postville, Iowa, who shared some personal vignettes and the personal and familial trials and tribulations of the Rubashkin family during this ordeal. He mentioned how much the outpouring of support means to his father, and he highlighted the unprecedented achdus and care demonstrated by Klal Yisroel, calling the wider frum community “a family.”

The event concluded at 12:45 a.m. As attendees exited the hall, uplifted and inspired, volunteers collected donations to be used directly to assist the Rubashkin family and pay for the exorbitant legal costs of the defense and appeal.

Significant funds must still be raised for the legal defense costs and the upcoming appeal. Anyone who can help out and lend support should take a moment to send a donation to the Pidyon Shvuyim Fund. The help of Yidden across the globe is severely needed.

You can easily donate by clicking here. 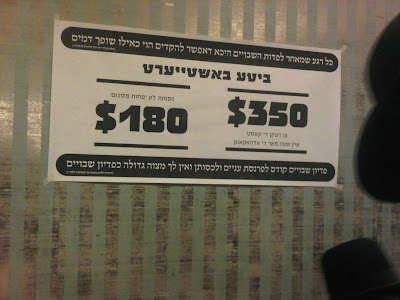 Kesser Distributors is offering Chuck Steak for $5.99 a pound for this week.

For a full price list, more information, and to order, please contact Chaim Holtzberg at yourkesser@gmail.com or 914-729-0838.

All chicken and meat is from David Elliot under CHK and shechted by Lubavitcher shochtim.
No comments: