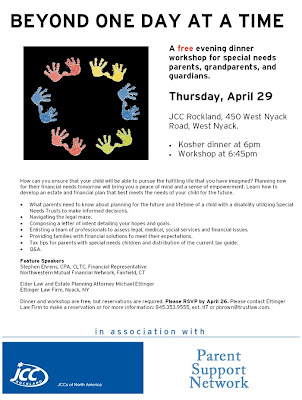 The Center for Jewish Life presented three programs for Holocaust Commemoration last week. First was a movie, "As Seen Through These Eyes," which depicted the creative efforts of concentration camp prisoners and Holocaust survivors. More than 150 people attended the event, which was co-sponsored by the JCC.

A child survivor of Auschwitz, Mrs. Bronia Brandman, shared her story with more than 100 students, faculty and community members of all backgrounds. Now a resident of Boro Park, Mrs. Brandman brought her gripping story to life with the addition of a slide show of photos of her family home in Poland and members of her family who did not survive. After the talk, she was surrounded by students of many backgrounds who were deeply touched by her story.

A third program featured musicologist and author Jerry Silverman, who presented a concert and lecture, "The Undying Flame: Ballads of the Holocaust," which included songs in multiple languages about the Holocaust.

A total of nearly 1,000 people attended the Jewish Heritage Month and Holocaust Commemoration activities!
No comments:

In the spirit of Achdus and Ahavas Yisroel, the Monsey Kehilla will be joining together for a community-wide Kinus for men and women on behalf of Reb Sholom Mordechai Halevi ben Rivka Rubashkin tonight, Tuesday, April 27th, the evening before his sentencing, at Yeshiva Ohr Somayach, 244 Route 306.

Maariv will be at 9:30 PM, followed by divrei hisororus at 9:45 PM from leading Rabbanim of the Monsey communities.

There will be a second Maariv at the conclusion of the program at approximately 10:30PM.
No comments: