This Motzai Shabbos – or Sunday morning, March 14 at 2:00 AM to be precise - remember to move your clock forward one hour for daylight savings time.
No comments:

Mazal tov to Pinchas and Sarah Marrus on the engagement of their daughter Chaya Mushka to Dovid Nacca of Buenos Aires, Argentina!
No comments:

The 2nd grade boys of Cheder Chabad visited the new iCandy store in Wesley Hills where they all received Pucker Powder as a reward for a job well done on their reading assignments. 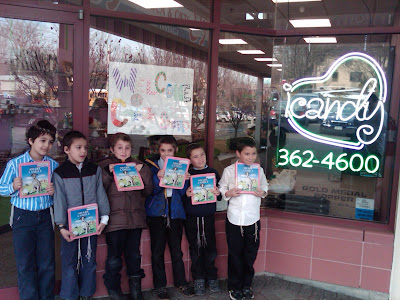 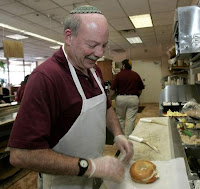 MONSEY — A Rockland group that caused an uproar when it purportedly put the pox on lox by claiming that the popular Jewish nosh isn't kosher said Tuesday that the warning was nothing but a fish tale.

"Go ahead, eat lox," said Yisroel Neiman, a member of Chevra Mehadrin, a Monsey organization that prepared a report recently on fish and Jewish law. "It's kosher — I just had some."

Neiman said he had no idea why the report was being interpreted to mean that salmon, the fish from which lox is made, violates Jewish dietary law.

"They made it up," Neiman said, referring to media organizations that attributed the ban on lox to the report. "It's a lie. We never said lox isn't kosher."

Neiman spoke to The Journal News briefly in the hall of the Monsey office where the organization is headquartered.

He said he was aware of the head scratching caused by the erroneous ruling on lox. That was not the intention of the organization, whose name means "group of the strictest level of kosher supervision," when it prepared its report, Neiman said.

"The purpose of Chevra Mehadrin is to inform the interested public of the kashrus (kosher)-related practices and protocols of each retailer so that consumers should know whether the products they are eating meet their kashrus expectations and standards," the report reads.

The group's report reviewed both Jewish law and modern methods of harvesting and preparing fish. It also included questionnaires sent to fish stores in the Monsey area about their practices and methods.

The report also discusses specific fish, including salmon, salmon fillets and lox. Under Jewish law, fish is kosher if an inspection shows that it has fins and scales.

The report notes that some inspectors classify salmon as kosher based on the fish's reddish appearance, but the group warns that modern practices can make nonkosher fish appear red and suggests that consumers ask their rabbi if they can rely solely on the color of the fish, instead of an inspection.

Even before Neiman said the ban on lox was false, many suspected something was fishy.

"Lox? Not kosher?" said Rabbi David Eidensohn, a frequent Orthodox Jewish commentator on family issues. "If you had asked me two weeks ago, I would have thought it was a Purim joke, and a bad joke at that."

At Kisco Kosher deli in White Plains, owner Zeev Bain said he would continue to carry lox as long as his rabbi-inspected suppliers assured him that the salmon being used was kosher.

"If there are two Jewish people involved in an argument, there should be three opinions, and all of them are valid," Bain said from behind the deli counter. "So, each person should decide for his own what he should adhere to."

Customer Phil Pearle of Mahopac had one thing to say about the idea of lox not being kosher: "It's ridiculous."

Mandy Ganchrow, a retired Monsey physician who formerly served as president of the Orthodox Union, the largest organization in the world that provides kosher certification, said he had heard about the reported ban and promptly rejected it.

"I'll be eating lox for lunch," he said. "It's a staple kosher item throughout the world."

Ganchrow said there was a tendency of some groups to go too far when interpreting finer points of the thousands of years of Jewish law.

"Everyone wants to be more frum — more religious — than the next guy," he said.

Rabbi Moshe Elefant, chief operating officer of the kosher division of Orthodox Union, said Jewish scholars had long debated the issue of salmon and the parasites commonly found in many fish and that they had concluded the food is kosher.

"This isn't a new question," he said. "It's discussed in the Talmud."

Elefant said he never heard of Chevra Mehadrin and had not seen the report.

"I'm not trying to belittle what they are doing," he said. "We welcome people asking questions, but if they have a question, they should come to us and ask it."

The lox uproar hasn't had an impact on sales at Bubba's Bagels, a popular store and cafe in Wesley Hills.

"We sell hundreds of packets a day," owner Hal Roth said. "No one is talking about not eating lox."

Herschel Lorenz of Monsey was buying lunch at Bubba's. He didn't order lox, but he does eat the fish from time to time.

Beginning tonight and for the next 2 weeks the weekly Wednesday night shiur for women by Rabbi Lesches will address the Halachos of Pesach. The shiur is at 8:00 PM at K'hal Tzemach Tzedek.
No comments: