Eliezer and Devorah Drew invite you to a Kiddush, in honor of the birth of their daughter Sarah Nechama, this Shabbos parshas Mishpatim, following davening, at their home, 17 Ashlawn Avenue.
No comments:

The l'chaim will take place this Motzai Shabbos at Lubavitch Yeshiva in Crown Heights.
No comments:

A few people have approached Mrs. Karen Schild, who is the amazingly dedicated coordinator of Shifra and Puah, about preparing breakfast for the mother of newborns in addition to the dinners that are cooked for a week or as needed (apparently some other communities do this as well).

Before she initiates this project Karen would like to hear some feedback about this idea from you. Please email her directly at karenschild@yahoo.com.
No comments:

Tonight's Esther or Hadassah Event is On 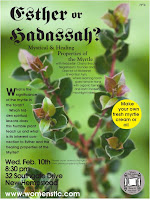 Ladies, lets face it - it would feel great to get out after being cooped up all day. So come bond, and be inspired, come learn about Esther and her connection to the Myrtle/Hadassah, come make your own Myrtle oil and come support Torah learning in Eretz Yisroel! The Esther or Hadassah event for tonight is on for 8:30 PM at the home of Mrs. Bracha Meshchaninov, 32 Southgate Drive. We hope to see you soon!
No comments:

Due to the inclement weather the Wednesday night halacha shiur for women has been canceled for this evening.

The Samach Vov shiur will take place as usual.
No comments: 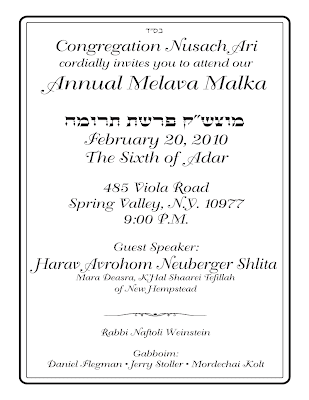 After two weeks of the Cheder's משניות בעל פה program the children collectively recited by heart מסכת 5 and 28 פרקים and 200 משניות! The boys learn these משניות by heart mainly during their free time, such as recess. Some Rebbis give the boys extra time in class to learn משניות בעל פה.

Help Save a Life

Both Jewish and non-Jewish community leaders are petitioning Florida Governor Charlie Crist for an emergency stay of execution for death-row prisoner Martin Grossman, scheduled to be executed on Feb. 16th.

National Council of Young Israel, Agudath Israel of America, Orthodox Union, Chabad, Satmar, Rabbinical Alliance of America, are amongst a list of 200 organizations pleading with the Florida Governor to grant a 60 day stay which would enable for a comprehensive clemency application to be presented and considered.

The case of Martin Grossman is gaining national attention. Grossman, in 1984 was a 19-year-old drug-addicted high-school drop-out with a juvenile record for trespassing. He and a friend, Thanye Taylor, drove to an isolated nature reserve to fire a found handgun.

A wildlife officer stopped them, searched their car and confiscated the gun. Martin,who is reported to have an IQ of 77, panicked and began pleading with the officer not to report him as he would be in violation of his probation. When she reached for her radio a struggle ensued, which resulted in the officer reaching for her own gun, whereupon Martin panicked, snatched her gun and shot her.

A psychiatrist who evaluated him concluded, from his psychological and medical condition, that he could not have formed the intent to kill. Taylor served less than three years in prison while Martin was sentenced to death.

Mr. Grossman has been on death row for over 25 years.

The petition argues that the death sentence meted out to him is disproportionate in the extreme and that his defense was inadequate. Only one percent of murder sentences end in capital punishment, crimes commonly referred to as "the worst of the worst."

The petition further argues that Martin's crime, considering the lack of premeditation, his drug addiction, his IQ level, and several other compelling factors does not qualify for the death penalty, and that the court ignored mitigating circumstances. Only four of thirty-three available defense witnesses were used in the sentencing phase.

Additionally, there are allegations of prosecutorial misconduct as well. A fellow prisoner and key witness for the government swears that he lied at trial, and that he was rewarded by having his own charges dropped. Martin Grossman's appeals regarding these issues have been rejected without hearings, but they could be considered in a clemency petition.

"Martin has shown deep and profound remorse over the years, and is no longer the same wild reckless person he was 26 years ago," argues Rabbi Menachem Katz from the Aleph Institute, who has visited him regularly over the past 15 years.

As of this release, Governor Crist has not agreed to grant a stay. Execution is set for February 16 at 6:00 PM.

Letters and calls should be polite pleas to the Governor to take into account Mr. Grossman's youth and impairment at the time of the crime and his good behavior and remorse in the years since. And the request should be that Mr. Grossman be permitted to serve his debt to society by serving the rest of his life in prison.

Please have Michoel Yechiel ben Miriam Sorah in mind when you daven.

You can also sign an online petition here.
No comments: 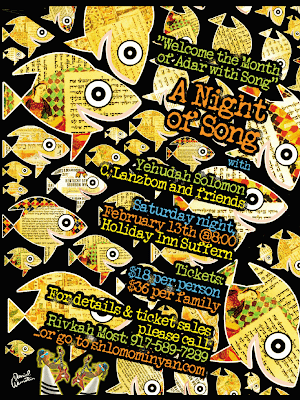