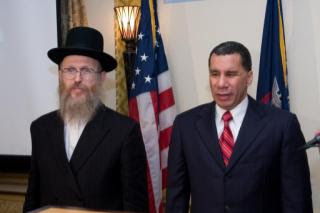 An exhibition on the role of comic book heroes will run from Sunday through March 26 at the Rockland Holocaust Museum and Study Center off Route 59.

On Sunday, Rabbi Simcha Weinstein will kick off the exhibition with a lecture taking people back to the 1930s and 1940s when Superman, Captain America and other superheroes stood up against the Nazis in comic books.

The exhibit features the birth of the American superheroes at the onset of World War II and their mission to fight the Nazis, said Tanja Sarett, the Holocaust center's executive director.

Sarett said the world needed superheroes as the Nazi persecution of European Jews and opponents mounted.

"Many artists chose to use their creativity to raise public awareness of the Nazi terror regime and the anti-Semitic threats Jews were facing on a daily basis," she said in a statement announcing the exhibition.

The cartoonists exhibit was designed by the Harriet and Kenneth Kupferberg Holocaust Resource Center. The exhibition continues the educational programs at the center, which opened in 1988 at 17 S. Madison Ave., next door to the Finkelstein Memorial Library on Route 59.

Weinstein is an internationally known author who received the prestigious Benjamin Franklin Award for the best book of 2007. He wrote, "Up, Up and Oy Vey. How Jewish History, Culture and Values Shaped the Comic Book Superhero."

Weinstein holds a degree in film history from the Manchester Metropolitan University in England. He chairs the Pratt Institute's Art and Design school in Brooklyn and has appeared on television and radio, including on CNN and National Public Radio. 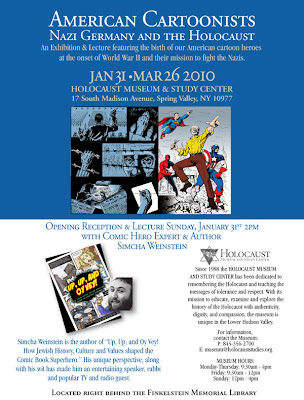 Mazal tov to Mayer and Shternie Perline on the birth of a granddaughter born to Avremele and Ayelet Rimler of Crown Heights!
No comments: