Cheder Chabad Girls are in full swing preparing for Yud Shevat. The girls are busy learning באתי לגני as well as many different Chassidishe facts. Twice a week there is a "Lunch and Learn" and רצוננו לראות את מלכנו - a Rebbe video. The buzz of learning is filling the hallways! The girls earn points for all the different activities. All girls who accumulate over 200 points will be going on an exciting surprise trip. Tuesday was "double day" where all learning was worth double the points. The Connect Four game in the photos represented four ways to connect to the Rebbe in honor of Yud Shevat.
VIDEO:

Cheder Chabad 4th grade boys made a siyum today on מסכת יומא. During the siyum the boys heard from special guest Rabbi Markowitz who spoke to them about their great accomplishment and told then that they should continue learning more מסכת of משניות. Rabbi Markowitz also explained two lessons that can be learned from the last משנה of the last פרק.

All the boys then received a certificate and heard a wonderful story told by Rabbi Shusterman. After the סיום the boys went on a trip for completing פרשת שמות.

Special thanks to Mr. Schwartz for driving the boys and to Mrs. Rosenbluh for lending her van.

Rabbi Markowitz to Speak in Toronto for Yud Shvat 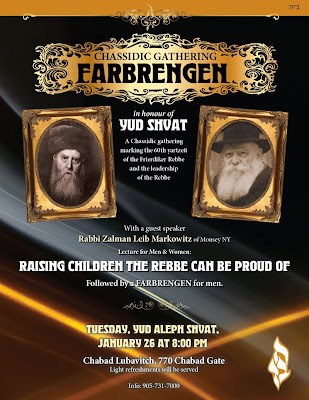 There are only a few days left until Yud Shvat.

Let us grab this opportunity and get together tomorrow night, Thursday (leil shishi), at 8:30 PM, to learn together the Maamer Basi Legani 5730 which is based on the 20th chapter of Basi Legani of the Frierdiker Rebbe corresponding to this year as we are concluding Basi Legani for the third time.

Remember this Yud Shvat marks 60 years of the histalkus of the Freirdiker Rebbe and the Rebbe’s leadership. Let us strengthen our hiskashrus to the Rebbe together!

I am looking forward to seeing you tomorrow night.

PS – Please tell your friends about this shiur.
No comments:

Yesterday two groups that live side by side in Spring Valley, both share deep religious traditions and sometimes isolate themselves from the mainstream came together for the first time.

"It's unfortunate that it was a tragedy that brought us together, but sometimes that happens," said Rabbi Ronald Greenwald, who organized the meeting.

Greenwald said he would ask the more than 40 Jewish schools in Rockland, which have 18,000 students, to collect food for the Haitian victims of the magnitude 7.0 earthquake, which might claim up to 200,000 lives.

Donations would be given to the Rockland County Haiti Relief Campaign, whose members were also at the meeting, held at Eli's Bagels in Spring Valley. Haiti relief campaign members intend to deliver goods and financial donations personally next month.

"The beginning of any relationship starts with two people meeting," said Renold Julien,the public face of the relief campaign and executive director of Konbit Neg Lakay, a Haitian community center in the village.

Aron Wieder, an assistant to the Spring Valley mayor, said he and others had made calls to Spring Valley's Orthodox Jewish community to raise funds for the relief mission.

Several businesses, including Zishes Homemade Bakery in Monsey, had contributed $4,000 toward a group of Rockland Hatian leaders and medical personnel’s airfare to Haiti via Chicago.

A few months ago, Greenwald and a friend visited Haiti. He said he was shocked by what he saw.

"The poverty we saw was frightening," Greenwald said. "It was difficult for me to look out of the car after 20 minutes because I saw miles and miles of people lying on the floor, sleeping outside, food on the ground. The word 'horrific' is very common today, but that's about the word that describes it."

Greenwald met privately with Julien soon after returning. They vowed to stay in touch, but the earthquake brought new urgency to their next get-together.
"The Haitians are private people. The Orthodox are private people. So you keep to yourselves. The truth is we should have relationships with neighbors," Greenwald said, explaining why it took the two groups so long to collaborate.

Elected officials were not invited to the meeting, as both sides wanted to focus on working with community activists. They discussed other ways to provide help, including wiring money to a Dominican Republic-based bank owned by Monsey resident Ezra Beyman. Transfer fees would be waived.

Beyman owns Empire American Holdings, based in Montvale, N.J. Empire American owns Banco de Ahorro y Credito in Santo Domingo, the capital of the Dominican Republic, which is on the same island as Haiti.
No comments: