If you would like to have a dedication in the Tanya printing that Monsey Beis Chaya Mushka Girls High School began at its dinner this week please contact Rabbi Kagan at 845-538-7484 or cdkagan@aol.com or Rabbi Touger at 845-426-0487 before this Sunday, January 17th.
No comments: 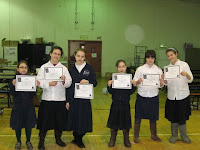 Cheder Chabad Girls had a ספר בראשית חידון this week to test the girls knowledge and expertise on ספר בראשית. All students in כיתות ג'-ז' were part of the חידון . The girls were given an initial test on the טייטש of various פתגמים from ספר בראשית.

To qualify for the competition phase the girls had to score higher on the test by learning the פתגמים in לשון קודש and מי אמר למי. When the scores were in we had our grand competition. There were two levels in the competition and a we had a winner from each level. The winner from Grades 3 - 4 were, Mussi Grossbaum and Nechama Kagan was runner up. In Grades 5-7 the winner was Fraidy Kagan and Chaya Mushka Marmulsteyn as runner up.

This past Monday, כ"ה טבת we had an assembly where all the contestants from our
חומש בראשית חידון were awarded certificates. The winners were rewarded with a beautiful laminated certificate. Yasher koach to all the girls at Cheder Chabad who put in so much effort learning the material for the חידון. Every child that participated is a winner because whatever you learn, especially in Limudei Kodesh subjects, is a good investment for the future.

I am looking for a chavrusa to learn Melicha with. I am available to learn on Wednesdays or Thursdays between 10:30 AM and 2:30pm. If need be I am willing to pay. Please email chosid770@yahoo.com.
No comments: