Seeking Room and Board

An 18 year old girl is seeking room and board in Monsey for the upcoming school year. If you or someone you know is interested please contact 914-588-6140 or wtschiffman@gmail.com.
No comments: 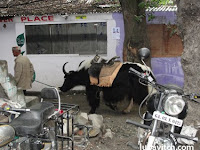 Sunday 5 of Av:
At 8:27am Yehuda wakes me up. I see he’s shook-up. He tells me that he got a call from a frantic tourist that a corpse was found. I called Rabbi Lesches, a Chabad rabbinic authority in Monsey, NY, and asked how to proceed with identifying the body halakhically [according to Jewish law]. Yehuda called the Jewish center in Kasol to inform them of the news.

The rickshaw kept stalling along the way, so we helped it along with our feet. We were told that the corpse was in the Old Manali Post Office, but as we neared the office we noticed a crowd of Indians clogging the street (more than usual). We got off rickshaw and saw the body lying in the gutter on the side of the street. We could tell by the appearance that the dead man wasn’t Ami-Chai, but we were disturbed to see the corpse exposed in the gutter like that, so we asked the police to cover it out of respect for the deceased.

In accordance with the Rebbe's directives to learn Hilchos Beis Habechira in the three weeks, there will be a shiur for N'shei Chabad with Rabbi Aaron Dovid Gancz tomorrow night, Tuesday, July 28th at 8.00 PM at the home of Esther Hazan, 21 Deerwood Road.
No comments: