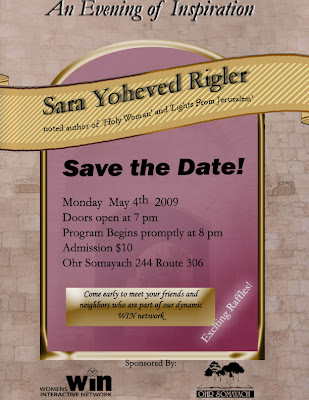 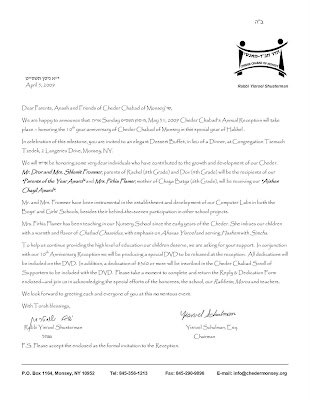 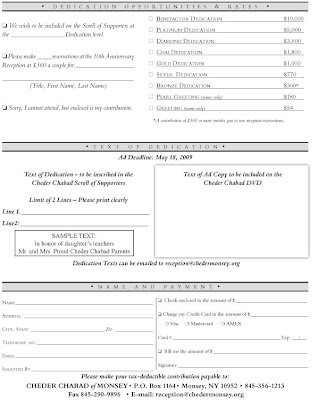 Do not miss the upcoming women’s retreat in the Berkshires – it’s worth coming even if you can only get away for a day or two!

“Discover the Divine” is an extraordinary learning retreat with some of the best educators around – Rabbi Manis Friedman, Sara Raskin (Chabad of Montreal), Miriam Lipskier (Chabad of Emory), Sara Karmely and Bracha Meshchaninov.

Come for the intriguing topics, the gorgeous setting, or the experience of meeting other women who’ve set aside time to for the finer things in life. A range of rates makes it easy to attend, there’s deferred payment if you need it, it’s only a 2 hour drive from Monsey and there’s childcare for young children.

All information is at www.baischana.org. Email info@baischana.org or call 718.604.0088 for more info or to sign up. The following is the schedule (click to enlarge): 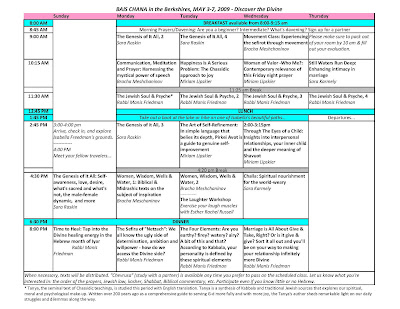 If you or someone you know is going to Crown Heights for shabbos and has room for a 12 year old girl please call Dini at 845-406-3960.
No comments:

By By Jenna Carlesso and Suzan Clarke, The Journal news

According to unofficial numbers, 1,794 people voted in favor of the new budget for Finkelstein Memorial Library, while 808 voted against it.

The library has been operating with the same $6.6 million budget that taxpayers approved in 2007-08 after voters last year defeated the $6.9 million proposal.

"We are very appreciative of the public support," said Richard Rothbard, president of the library's board of trustees. "The need for libraries is even greater now with the state of the economy."

The money will help bring back services that were cut last year, such as more weekend hours in the summer, Devino said.

It also will allow guests to check out a greater number of items at a time and help purchase new books, he added.

A steady stream of people filed into the library around 1:30 p.m. yesterday and waited in line to vote.

"I voted 'yes.' It's a wonderful library," said Karl Witte of New Hempstead. "I have five people in my family that use this library consistently."

Sam Dobner of Monsey agreed that the library provided a good service, but said that in this economy, his $800 library bill was too steep.

"It's just a lot of money for what I consider a luxury," said Dobner, who voted against the spending plan.

The South East Ramapo Taxpayers Association, a watchdog group that has opposed the budget in recent years, this year has said the increase was unjustifiable given the current economic situation.

"It definitely came at a bad time," Kalman Weber, president of the taxpayers association, said of the budget increase. "It's not just for this year, it's for next year also."

Finkelstein is the largest library in Rockland and in the Ramapo Catskill Library System, serving a population of about 100,000 in the East Ramapo school district.

After last year's defeat, the library was forced to scale back on summer weekend hours, lower the checkout limit, limit computer access, and eliminate seven-day lending of best sellers, among other restrictions.

Most of those will be reversed with the new budget, Devino noted.

Incumbent library board Trustee Vivian Street also was seeking re-election to her post. Her bid was unopposed.

"Right now, we have no plans for additions, only restorations and stabilization," she said yesterday. "It's a bad economy. We're not trying to create more of a burden."
No comments: