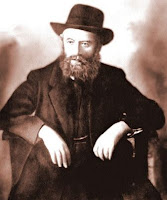 There will be a farbrengen with Rabbi Lesches at K'hal Tzemach Tzedek following Maariv tonight, Thursday, in honor of Bes Nissan, the Yarzeit of the Rebbe Rashab.
No comments:

Birchas HaChama with the Rebbe (1981)

To purchase the new Birchas HaChama video from JEM click here.
No comments:

Mazel tov to Binyamin (Ben) and Menucha (Natalie) Levine on the engagement of their daughter Ita to Shaul Levine!
No comments: 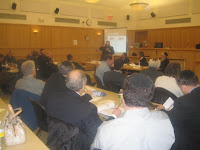 For the last six Wednesdays, Chabad of Suffern had the pleasure of presenting the JLI course, You Be the Judge II. 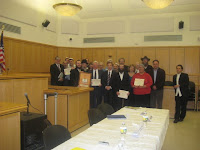 Real cases that were brought before Beit Din were deliberated civilly, in our courtroom setting at Ramapo Town Court, by State Supreme Court Justices, County and City Judges, as well as a District Attorney, while our esteemed Rabbis Ganczs presented the Jewish Law.

The success of this course was proven by the number of participants who eagerly signed up for the classes. Over 80 of them were attorneys, the majority of those Jewish. As the result of the involvement of so many Jewish attorneys, we are now looking at the possibility of establishing a Jewish Legal Society.

None of this would have been possible had it not been for the kindness and generosity of Dr. Alex Poltorak. In the merit of his father, Judge Reb Avraham Shamshon Kleynerman A"H., Mr. Poltorak graciously provided the funding for Chabad of Suffern to offer this JLI course. Dr. Poltorak’s father, Judge Kleynerman would be especially moved by this event as in Judge Kleynerman’s world, living in Russia, he would never have had the opportunity to combine the learning of Torah Law and Civil Law. Thanks to his son, Alex, in Judge Kleynerman’s merit, he has been a vital part in making this all possible for so many.

The Lubavitcher Rebbe said years ago that we would see this very thing happening in the Soviet Union, where Civil Law and Jewish Law would in fact be deliberated together. We have been fortunate in having seen it happening in our own midst.

We would like to thank Yisroel Schulman for all of the time and energy he invested in this program. His advice was invaluable and organizing the program for attorneys could not have been accomplished without him.
No comments: