This Wednesday we had an assembly in honor of Rosh Chodesh Adar. The Rosh Chodesh assembly started off with Rabbi Wolowik speaking to us about “משנכנס אדר מרבם בשמחה.” He told us that it means in חודש אדר we should increase our Simcha - not like the non Jews, by going to bars and getting drunk but rather by learning תורה. He also told us that “ליהודים היתה אורה ושמחה וששן ויקר.“ אורה=תורה, שמחה=יום טוב, ששן=מילה, ויקר=תפילין.

Then Rabbi Wolowik introduced the new Tzivos Hashem Tanya Bal Peh Program. Each child gets to choose his own level ladder of how much and at what speed he can memorize Tanya. After Rabbi Wolowik finished speaking the Rebbeim gave out candy and hamantashin.

Then we ate a scrumptious lunch of roast chicken, sliced potatoes and veggies. During lunch we watched the Rebbe Video called “The Best of Precious Moments.” Later on in the day we had a great surprise, the Cheder treated eveyone to cotton candy!

Thank you Rabbi Wolowik and all the staff at Cheder Chabad for such a great Rosh Chodesh. 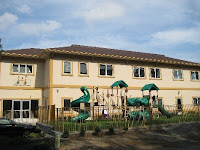 Chabad Early Learning Center in Rockaway, NJ currently has pre-school teaching positions available at their summer camp and for their 2009-2010 school year. For more information please contact Morah Flory at morahflory@chabadkidz.com or 973-983-8811.
No comments:

Mazel tov to Eli and Breindy Gitler on the engagement of their son Avrumi to Chavie Kornfeld of Seattle, Washington!
No comments: