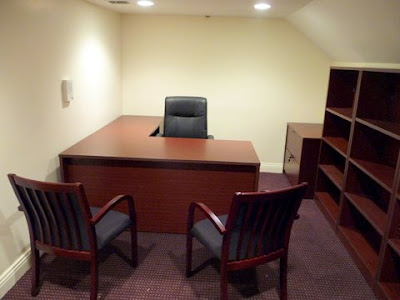 The Rav's new study in the K'hal Tzemach Tzedek Lubavitch of Monsey building. Thanks to Aron Groner of cubicles.com for donating the furniture.
No comments:

MONSEY - A mother and her son, who was in a stroller, were hit by a car that jumped the curb onto the Route 306 sidewalk during a three-car collision yesterday morning, police said.

The stroller with the buckled-in 2-year-old ended up pressed against the car's rear passenger wheel, police and witnesses said.

The mother lay unconscious a few feet from her son when emergency responders arrived, police and witnesses said.

"I heard a big crash noise and I saw the baby in the carriage," Chaim Twersky said, pointing to the crushed stroller under the car wheel.

"I looked outside, and I saw the baby's head sticking out near the tire," he said.

Twersky said he knows the mother, Henny Gefner, 39, as a neighbor. He said she just celebrated the wedding of her oldest child.

"I was scared by what I saw," Twersky said, standing amid more than a dozen young men who congregated near the accident scene.

Gefner remained in fair condition, while her son was in good condition, said Sgt. Mark Briggs of the Ramapo police.

"It's amazing after looking at the scene that they would survive that," Briggs said. "We're very glad this didn't become a tragedy."

Under a sunny sky and cool weather, Gefner was walking her son, Mendy, in the stroller on the Route 306 sidewalk when the 9:30 a.m. accident occurred on Route 306 and Phyllis Terrace.

A Honda Accord driving south on Route 306 stopped at a red light with plans to turn left onto Phyllis Terrace, police said. A Honda Odyssey then struck the Accord from behind, police said.

The force of the collision drove the Accord into the opposite lane, where it collided with a northbound Chevrolet Cobalt,police said.

The Cobalt spun out of control, jumped a curb and struck the mother pushing the stroller, police said.

Hatzoloh Ambulance Corps members responded and took the mother and boy to the hospital.

The Cobalt's driver, Febee Cherubin, 46, of Spring Valley, complained of minor injuries and was taken by ambulance to Good Samaritan Hospital in Suffern.

Abraham Apter, 43, of Kaser was driving the Honda Odyssey, while Chaim Kessler, 25, of Kaser drove the Accord. Kessler declined to comment, and Apter could not be reached for comment.

They circled with chalk items for evidence, including one of the stroller's small wheels that had broken off from the frame.

Other officers blocked Route 306 to traffic from Rita Avenue to the north after the accident.

Briggs said no tickets or charges have been issued.
No comments: