Rabbi Yaakov Spivak will address RCC students, staff and community members in the Contemporary Jewish Issues class taught by Rabbi Dov Oliver, on the topic of Jews for J; Its Reality, Its Reach, Its Dangers. The talk will be at RCC in Room 2104 in the Academic 1 Building from 1:00 PM to 2:15 PM on Wednesday February, 18. All are welcome to attend.

Rabbi Yaakov Spivak received his ordination from Baltimore's Ner Yisrael Yeshiva. He holds a Master's Degree in Education from Loyola College, and is a nationally known columnist and radio and TV commentator. As Dean of the Ayshel Avraham Rabbinical Seminary, he has seen his rabbinic graduates occupy positions in Jewish communities across the world.
No comments: 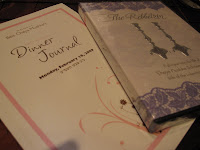 Rabbi Kagan began the program with a short video of the Rebbe speaking about the importance of a high quality education for girls. This was followed by the recital of Tehillim led by Dr. Chaim Schild.

The Parents of the Year award was presented to the dynamic Rav of the fast growing Lubavitcher Kehilla in Monsey, Rabbi and Rebbetzin Boruch D. and Shterna Lesches. Rabbi Lesches spoke about the tremendous importance this institution plays in the greater Monsey community and of his personal involvement as a parent of a child in the school.

The Avodas HaKodesh award was given to Mr. and Mrs. Mordechai and Malka Litzman who dedicate a tremendous amount of time and energy to the school.

A selection of the JEM video, The Rebbetzin, which was distributed to all guests as a momento of the evening, was shown in honor of Chof Beis Shvat.

The famous Badchan Reb Zushe Schmeltzer then entertainingly auctioned off a beautiful piece of art by renowned artist Michoel Muchnik.

The beautiful evening concluded with guest speaker and comic David Rosner who amused the crowd with his routine about being a Jew in the US army.

As the dinner was finishing, Rabbi Kagan announced that Dr. Alex Poltorak, who was not at the dinner since he is in aveilus, would be dedicating a new state of the art science laboratory for the school in memory of his father Reb Avraham Shamshon Kleynerman A"H.

If you are going to Crown Heights this Friday and have room for a mother and baby please call 845-371-2138.
No comments: